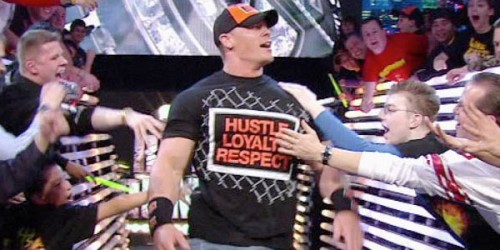 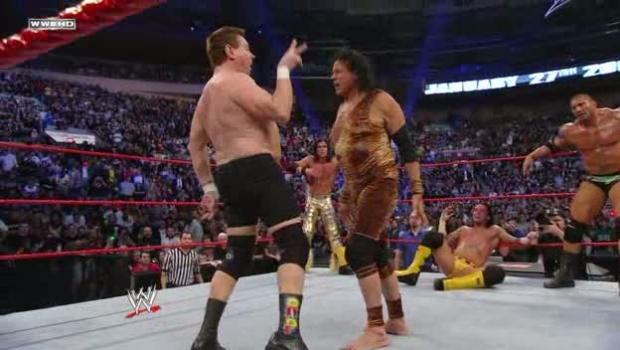 Winner: 5/5 Stars-Hate on him all you want, this was the biggest pop of his career and he deserved this win, not 2013

Great Moment You May Have Forgotten: It's not a moment per say, but the work of some of the mid card talent at the time in this match (John Morrison, CM Punk, Cody Rhodes, yes even the Miz) was fantastic and showed a sign of things to come for many superstars in the last several years

Moment You Wish You Weren't Reminded Of: If I wrote this last year, the answer would've been the Hornswoggle/ Finlay mess, but now It's hard not to look at the picture above and cringe. Not to mention they were purely terrible in the ring since they were both old and out of shape.

There are Rumble surprise entrants and there are HOLY SCHNICKES WHO SAW THAT COMING!!! This was the latter, as America's favorite burier of talent was rightfully burying them this time in order to ascend the mountain top.

This was the first Rumble at the Garden since 2000, arguably one of the best worked PPVs of all time. So naturally WWE had to pull out all the stops, and in many ways it was hit and miss. On the positives, you had Michael Buffer announcing a Rumble in the only way he should, amazingly. There was also Ric Flair's "Retirement" tour as he defeated everyone's least favorite individual, MVP. The entrance is kinda cool, as you can always keep an eye on who is going to appear. On the negatives, because of the three brand split, this match was announced by SIX commentators. I know the Rumble is supposed to feature everyone who is involved in the company, but there is no way in your right mind you can keep a cool understanding with that much fluff all over the place. Finally, because this is the City that Never Sleeps, the WWE wanted to bring back wrestlers that will help us sleep, which we will cover in a little bit. But for now, on with the show (doing that in my best movie theatre voice). Or maybe I should instead say...LLLLLLET'S GET READY TO RUMBLLLLLLLEEEEEE!!!!

The match starts off the way every Rumble in history should always start off, that being Shawn Michaels vs. the Undertaker. Following their epic encounter at the previous Rumble (where will it make the list, who knows?), these two went right back to work. It's really great to know that these Rumble appearances were precursors to the greatness we were soon about to encounter at Mania 25 and 26. If you pretend (and we like to) that Santino Marella and Great Khali weren't fed as shark bate to these two, we had a good six minute encounter of the greatest performers to ever lace up a pair of size 1 million boots.

Unlike the 2009 Rumble, where a bunch of stars in the ring became a hindrance, the 2008 match was perfectly synched with allowed the mass of stars in there to shine for their own moments. Morrison and Punk were just fantastic in the ring and psychology. If you pretend that Hardcore Holly did not eliminate himself stupidity at one point, he was pretty good. Hell even the Chuck Palumbo/ Jamie Noble mini feud...yea that really happened....was a nice touch. However, there always is the bad to compliment the good in these matches. Tommy Dreamer was underutilized. Don't even get me started on The Shelton Benjamin Treatment, who did his trademark signature move early and was behead once again by HBK. There's the Hornswoggle mess, who hid under the ring, waited for nearly a half hour, only to sneakily throw Miz out of the ring and fail with thinking he could lift Mark Henry. Then as he's about to be destroyed by Henry and (my goodness how are you in so many Rumbles?) Big Daddy V, Finlay comes out early and uses his shillelagh and was disqualified. Cause that makes sense. Also Hornswoggle wasn't eliminated so technically, he is still in the Rumble match, right Curtis Axel?

Anyway, back to the action, as it can't be MSG without Third Degree Murderer Legendary high flyer Jimmy Superfly Snuka. He comes out to a huge pop and embarrasses seniors everywhere, only to hear the bagpipes of Roddy Piper come out next. Everyone in the match just kinda stops and stares because they decide they need a laugh, and watch these two geriatrics go at each other with canes and bingo boards. Thankfully Kane actually accomplished something amazing and eliminated them both. It's hard to watch now but it was kinda hard to watch then for different reasons.

Well soon after that Snitsky was not at fault when the Undertaker clotheslined him out. In trademark fashion, Taker just stares as his prey while Michaels seizes his moment and got his revenge, knocking him out of the Rumble. Then Michaels, ever the humanitarian, gloats as well only to be thrown out by MR. KENNNNNEDY! Taker is fuming at HBK, but decides better of it and makes Snitsky his fresh meat, leg dropping him through an announce table.

The rest of the Rumble until number 29 went about as you'd expect. You had a fun Mick Foley appearance while he could still walk, Umaga owning the yard and incapacitating Batista, and a rare Chavo appearance. But at number 29, everyone's favorite COO came in and seemed like the clear and poised winner. He quickly disposes of Elijah Burke (remember him), Cody Rhodes, and Big Daddy V on his own. I don't care if he's a glorified jobber, that's a 500 pound man Trips threw out, give him credit. He also stares down Mick Foley, in a moment truly awe inspiring considering it was only 8 years ago that those two made me rethink thumbtacks. It was his to win, no body was going to stop him, no matter who number thirty is.

YABBA DABBO DOO....AVENUE...POTATO....RAPPADOO...whatever the opening word is, out burst John Cena, a man who tore his pectoral a few months ago and wasn't slated to come back for another half a year at least. This man is absolutely incredibly, a Superman who can overcome any obstacle, including modern medicine. Well the crowd is so absolutely shocked they actually cheer Cena. He enters as a madman. Out goes Carlito. Out goes Chavo, Out goes Mark Henry, kind of a chance to show Hunter he can be a macho strong man against large black guys too. Then after an intense star down between John and Paul, Dave Bautista just wouldn't let it be (pun) and gets his name back into the mix, throwing out KENNEDDDDYY, then dispatching the monster Umaga, then teaming with Trips to make sure Kane once again loses a Rumble. 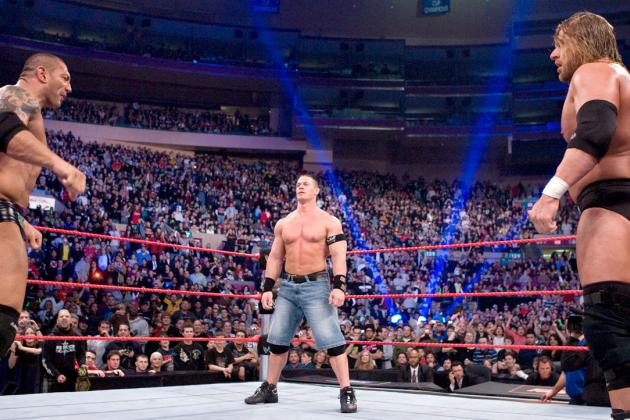 The final staredown is great if you enjoy WWE favorites and no underdogs. Cena, Batista, and HHH recreate the scene from "The Good, the Bad, and the Ugly" where they stare at each other in a a triangle shoot out, each doing their signature jackass pose. Well eventually a true brew-ha-ha ensues and after some careful selection and a near Batista-bomb, Hunter throws Dave out and leaves himself with Cena. They do their signature back and forth near finish mantra before Cena grabs Trips, walks him to the ropes, and AA's his butt out of the ring. CENA DID IT, CENA DID IT!!! An incredible shocking moment leads to a victory no one saw coming, and will never see again due to the internet being a spoiler every damn minute.

This match had everything you wanted in a Rumble match, but you can argue too much of something is not a good thing. In an attempt to keep the thing big at MSG, they may have overdone a few segments, but that shock value of Cena winning even had you wanting to buy the Marine (just kidding). Another very good job making us care for the most part.

Somewhere in the great beyond, Big Daddy V is competing in another Rumble, but he was just happy to be there in 2008. RIP big guy. Tomorrow's match also features a wrestler coming back from a brutal injury to win the Royal Rumble. Wow that's a common theme towards the top here it seems. Plus I'm pretty sure I converted from my old religion in this match. How is that possible? Find out tomorrow friends.