I was one of the lucky few with a fast enough internet connection to get tickets to the NXT Chicago show for the whole 30 seconds they were available. Here's my recap of the night.

I have to start with a few comments about the venue. The Portage Theater was, and I’m being charitable here, ill-suited for the event. Beyond the heating issues that were widely reported as causing the delay of the earlier matinee, the seating was a hot mess. More than half of the seating was rented folding chairs with no designated letters or numbers (or random numbers that had no correlation to the actual seat location), shoved so close together you were literally touching your seatmates on all sides of you. I’m only 5’1" and fairly slim; I can’t imagine how uncomfortable it was for larger fans.

My seat was on the stage, 4 rows back. With the height of the mat below the height of the stage, if you weren’t in the front row, the view from our little folding chairs was pretty bad. The only reason I could see at all was because I was first off the rail towards the center of the stage (which meant I had some pretty great interactions with performers; more on that later.) If I craned my neck I could see about 2/3 of the ring while seated; if I stood and the people in front were sitting I could see pretty well, but I only did that when necessary so as to avoid blocking those behind me. Mind you, we all paid $80 per ticket for these seats. Friendships were formed via mutual grumbling about the situation.

Thankfully, the wrestling was so good that I ain’t even mad when I think about the crappy venue. I’m still buzzing with excitement (and nursing a sore throat) this morning. My highlights:

Enzo and Big Cass started out the show and holy hell is it fun to chant along with them. I am always here for Cass throwing Enzo at people (or throwing people at each other). They lost to Dash and Dawson, but they didn’t look the least bit SAWFT. If you don’t think these guys will be super freaking over from the moment they hit the main roster, you’re blind or just being a jerk.

Carmella vs Alexa Bliss was a fun match. Carmella plays the babyface role so well, and Bliss is a one-woman clinic in dismissive heel eye-rolling.

Bull Dempsey is so charming as a goofy face! I never would have anticipated that, but the crowd loved him with his jumping jacks and belly smacks. Elias Sampson is… boring. The sound was crappy from my seats on the stage but it didn't sound like he was a good guitar player or singer, either. The crowd mostly hated him, and not in a good way.

Nia Jax’s size and strength is seriously impressive in person. I hope she becomes and remains a major force in women’s wrestling. I know she's still green, but there's potential and we need more big, powerful women!

And then there’s Bayley. BAYLEY! Her music hit and she came out on the stage and the crowd went nuts. We were all standing and cheering and she looked over at us and CAME RIGHT FOR ME AND GAVE ME A GIANT HUG. I still can’t believe it. I hugged Bayley! What a moment. Luckily after that match it was intermission and I had some much needed time to collect myself.

Sami Zayn: Best. Surprise. Ever. I didn’t think he was on the card for the evening show, so when his music started we all popped big time. And oh my god you guys, the Zayn-Ciampa match was incredible. Probably the best wrestling I’ve ever seen live. Without a doubt it was the match of the night, and the crowd was suuuuper into it. This was the match that got all of the "This is awesome" and "This is wrestling" and "NXT" chants.

I am all for Eva Marie in theory, when I think about her in the role of trolling the SRS BUSINESS wrestling fans. And the first half of her match with Peyton Royce was passable, but it’s like her robot brain maxed out the RAM halfway through and she forgot how to even pretend to wrestle. The last few minutes there were major botches and Royce had to drag her around the ring to accomplish anything resembling an ending. Again, this is not me being a picky wrestling fan, and I take no joy in seeing her fail. But Eva was so bad it was uncomfortable to watch. It was so bad that I avoided looking at her when she left the ring and crossed by us on the stage because I was still cringing inside.

The main event was a triple threat match between Apollo Creed, Baron Corbin, and the champ Finn Balor. Apollo’s enthusiasm is infectious. Just watching his brilliant smile close up when he came out on stage made me suddenly love him. That’s some serious charisma, folks. The match itself was fantastic. Triple threat matches seem like they’d be really hard to book/choreograph, but they gave us just the right amount of hiding outside the ring (loved the "Baron’s sleeping" chants when he was out of the ring), plenty of interference foiling planned moves, and lots of big spots and just all around amazing wrestling. I still think Zayn/Ciampa was MOTN but this was a great main event. 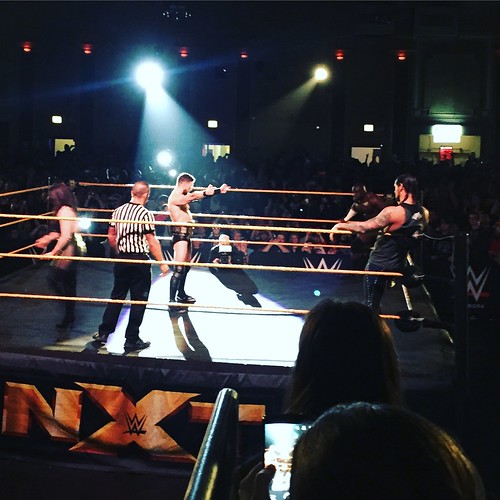 The change in Finn’s demeanor pre- and post- match was pretty striking. When he came out before the match, he didn’t really even acknowledge us yelling at him and making the Kliq/NWO/BC/too-sweet/whatever you call it hand gesture. He seemed very serious and focused. I was honestly a little disappointed having seen the pictures of him interacting with the fans in line for the matinee show.

But after the match (Finn retained, natch) he transformed into the friendly, charismatic face of the company. He called Bayley out and they brought a bunch of kids from the audience into the ring and introduced them as the future of NXT and this business. It was pretty great, and as the show finally ended and he left and passed us on stage, he "too-sweet"-ed us all.

I thought the Chicago crowd hit a pretty good balance in terms of having lots of fun and enhancing the event with chants and stuff, without being too into their own cleverness. Of course there were a few of those--what is it with those dudes (always dudes) who apparently think they’re the ones we all paid to see show off?--but otherwise it was a blast to be in that crowd.