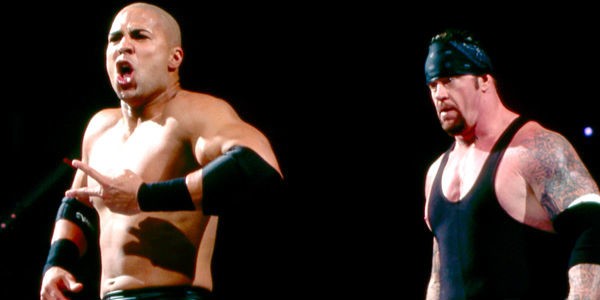 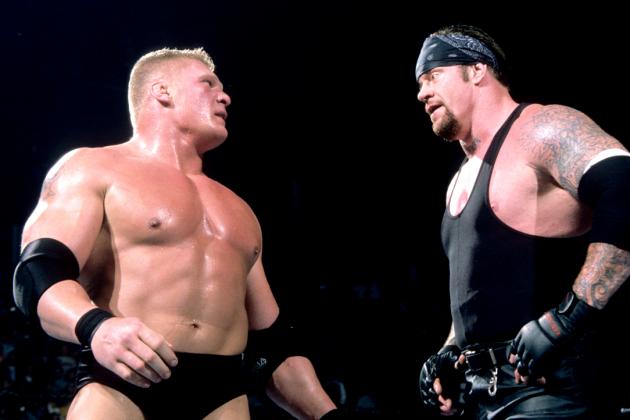 There Went the Pain!!!

(Oh Undertaker, will you ever learn to not underestimate Lesnar?)

Extracurriculars: 2/5 Stars-brutality does not hold up even 12 years later

Great Moment You May Have Forgotten: Had to be Maven suffering from Taker's wrath again. That or the antics of Matt Hardy and Shannon Moore were hilarious.

Moment You Wish You Weren't Reminded Of: I'll cover the injuries in detail, but a particularly low light to Chris Nowinski, who's name is now synonymous with what happened to him in this match.

Brock Lesnar had just come off a match in which he pummeled the Big Show in order to appear in a bigger showdown with the Undertaker.

This is another unbelievably unique and exciting Rumble that featured the best and worst of what the Ruthless Agression Era had to offer. It was action packed, contained the WWE's biggest names, and featured intense hardcore action that probably led to shorten careers and lives that we know all so well. Before the match even began, the entire Rumble PPV was a success, with one of the greatest title matches of all time (Angle v. Benoit) complimenting one of the hilariously worst title matches of all time (HHH v. Scott Steiner). So it was enjoyable to say the least. But the Rumble brought a new found sense of a clearly changing era from one of ridiculously brilliant story-lines to one of ridiculously brilliant wrestling. But of course among that skill laid the foundation for trauma.

The match started off with a bang. Two time winner Shawn Michaels made his first Rumble appearance since winning it in 1996, a feat some thought we would never see again. So who comes out at number 2? His favorite fan follower Chris Jericho, who was in the midst of a great heel run. BUT WAIT!!! It's Christian (who is clearly not at last on his own) posing as Jericho, allowing Jericho to come from behind and just obliterate Michaels. He hits all of his moves, goes out and grabs a chair, and exposes his head to the crimson fountain. Out comes Chris Nowinski at Number 3 who, using his Harvard intellect, just stands there and let's Jericho dismember and eliminate Micheals, assuring that he will certainly not come back to bite him in the tuccas....

What happens in the next 10 minutes or so of this match is not for the faint of heart. Soon Edge, Rey Mysterio, and Christian come in and join the fray. During the early portion of the match, Edge and Rey team up and beat up Nowinski. Well one wrong jump and Nowinski's face met Edge's leg and he suffers a terrible concussion. To add injury to more injury, he has to stay in the match another minute, take multiple punches and bronco busters to the head, and eventually is thrown out by Mysterio head first. Now for those that may have forgotten the Harvard wrestler, Nowinski is now the head of a study on concussions and is responsible for looking into all the NFL concussion players who unfortunately pass away earlier, so good came from his own lack of recognizance.

The rest the first third was also brutal. Tommy Dreamer went hardcore on everybody and laid a welt into Jericho's face that still makes me cringe. Edge, being the lanky tall guy he is, clearly had both feet hit the floor on a dangling move but the ref's said one so it would avoid ruining the spot of his elimination. Bull Buchanon(known as B2 because John Cena needed another bad rapping partner) and Bill Demott (yea...that guy) both existed. But when the dust all settle, only Jericho remained in the early going as everyone else went bye bye.

Spots 12-27 were fun to some degree but really all cannon fodder for the end. You had the good (The RVD- Kane saga, Eddie Guerrero, Matt Hardy version something via Shannon Moore, Team Angle in perfect unison), the bad (Test, Maven, 3 minute warning), and the ugly (John Cena's rap, Matt Bloom in his ungodly hairy persona that reminds me of a Russian Bear). But you also had GOOD GOD HBK IS BACK!!! Yes HBK came back to get his revenge of Jericho, the star of the early match, by beating him up just enough to get Test to use his Testicles to throw Y2J out. Then the brawl ensues and yay a great match was set at Mania.

But this match kicked into full gear starting at number 28, when Batista came out, looking like a porn star. He would lay waste to Test and Rikishi, quickly becoming Jerry Lawlers 6th favorite to win in the match. Until 29, when BORK LAZER came out and made me want to hide in the corner and cry for fear. He throws out Charlie Haas and The Shelton Benjamin Treatment at the same time, ending a great run for Team angle. Then murders Matt Hardy when an F5 equivalent to a small plane ride. Now Lesnar is the new favorite according to Lawler. 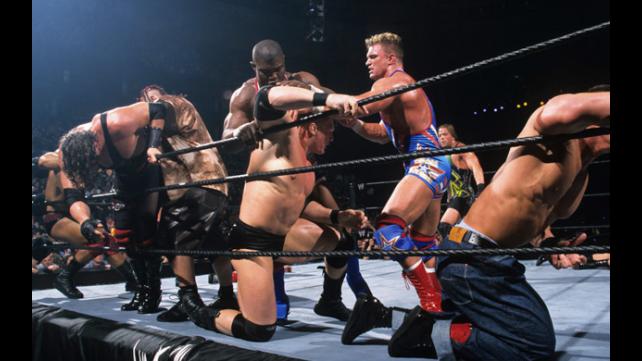 DEAD MAN WALKING!!!! Out to whatever theme he was using this week at number 30 was Biker Taker, a man on a mission to make people forget who he really was. Down goes John Cena (ah the good old days before he was the Eater of Career Pushes). Down goes Jamal (Umaga for later fans). Then of course, Taker never learns and yells at his prey, and MAVEN GOT HIM AGAIN OMG!!! Except Taker did not fall this time and Maven ate a good Chokeslam and revenge for...also being rendered incapacitated last year.

So after a fun elimination of RVD when Kane betrayed him. Our Final Four is Taker, Kane, Lesnar, and Batista (No this is not 2015 I swear). Well, Taker really owns the yard and starts tearing apart people, even Tombstoning Lesnar, and eliminates Batista. Then, Taker the sly dog convinces Kane to join him as the Brothers of Destruction take care of an injured Lesnar. Only problem is Biker Taker can't be trusted and throws Kane out! This is followed by an angry douchy Batista (again, 2003 not 2015) coming in with a steel chair to take care of the Dead Man. Well Batista eats a concussion shot and Taker, of course, gloats as Batista rolls out of the ring, allowing Lesnar to sneak attack an elimination and a shocking win.

The match concludes with two longstanding rivals Taker and Lesnar shaking hands in a sign of respect (once again and I can't stress this enough, it's 2003, not 2015). Overall, Lensar winning was fantastic, for he is the most unbelievable machine in WWE's history, and it led to the Shooting Star Press of Doom match against Kurt Angle at Mania. This Rumble was so fun, so intense, and yet so brutal for it's own good. That, and probably A-Train, are what brought this down from the elites, but I still have fun watching stars of yesteryear such as Brock Lesnar, Undertaker, Kane, and John Cena....What? Me sarcastic??? Never.

Hide the kids, this Rumble is not for the weak at heart. Tomorrow's Rumble is fun for the kids, as an incredible comeback story and a legendary one on one affair we can't talk about anymore take center stage. Oh boy Oh boy Oh boy.