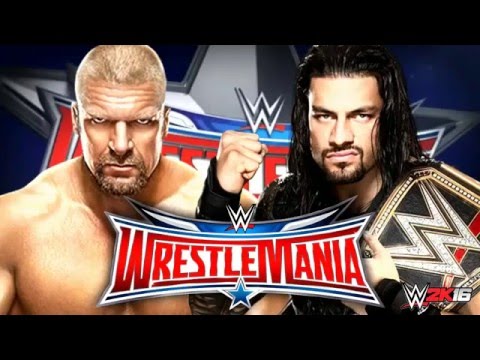 Now, as of recently Vince McMahon made Roman Reigns set to defend his WWE World Heavyweight Championship against not one, not two but twenty-nine other men in the Royal Rumble Match, now odds are telling you that a certain "King" is set to return and capture his 14th World Championship in the Rumble match, you guessed it, I'm talking about...Triple H. Now, the seeds for this feud for Triple H and Roman Reigns began in around November, when the former champion Seth Rollins went out with an injury and had to vacate his WWE Championship, thus causing WWE to create a tournament to crown a new champion, now obviously Reigns is in that tournament since at that time, he was the #1 Contender to Rollins' title, on the November 9th edition of Raw, Triple H of course calls out Reigns and tells him that the tournament would be "unfair" to Reigns, since he is the current #1 Contender for the WWE World Heavyweight Championship, and that the winner of the tournament would instead of winning the championship, fought Reigns at Survivor Series, hence where my issue starts to begin with this feud.

Now my first issue with this feud starting off is, Triple H sort of does have a point, now it may just be me but, if I worked hard and climb through all these obstacles to finally become #1 Contender for the World Championship only to keep getting constantly and constantly screwed out of those chances, more than likely, I might indeed just "sell out" to The Authority, and just take the World Title, now that may be unethical to some people but let's be honest. we're all human and we all have aspirations and desires, and sometimes, we'll do whatever it takes to get to those aspirations, in Reigns' point, the WWE World Heavyweight Championship.

So of course, Roman decides to do things the hard way, and goes through Big Show, Cesaro, Alberto Del Rio and eventually his brother Dean Ambrose at Survivor Series to finally capture his destiny, The WWE World Heavyweight Championship, then of course as the celebration occurs in the ring, with the pyro and the confetti going off, Triple H of course, comes down to the ring, clapping and actually seems happy that Reigns had won the championship, and then of course tries to share the spotlight with Roman, and then wants to Roman to shake his hand, Roman however responds with a Spear almost instantly.

Now here comes another issue, I have, why does Triple H exactly deserve getting a Spear from Roman, I mean all he was kind of asking for was just a handshake from Roman, now if I was Reigns, I would've just shaken HHH's hand and walked off, considering the events likely to happen next involving a certain Irish fella, I would've just shook his hand, it wouldn't have meant me selling out to The Authority, I could've just done that and it would've been over with, but instead what happens, Reigns spears HHH and then almost instantly, pays for it with a Brouge Kick from Sheamus and he loses the Championship in about, uh...5 minutes and 15 seconds. And as a fan, I'm supposed to feel bad for Roman's shortcomings when in reality, he kind of did brought all of that on himself, he could've sold out to The Authority and took the easy and unethical way out, instead he decides to go through the entire tournament, and instead of shaking HHH's hand, he just spears him out of spite and then loses his World Title to Sheamus via Money In The Bank cash in, ultimately as a fan, I just laughed at Roman for not exactly selling out, and wanting to do things, "the right way".

Now I may have been speaking from a devil's advocate point of view, since that's really the entire thing, I'm seeing with this Reigns and McMahons feud, but in a way, to me at least, it kind of is true in a way, so you guys can let me know what y'all think of this feud and the upcoming Royal Rumble WWE World Heavyweight Championship Match.