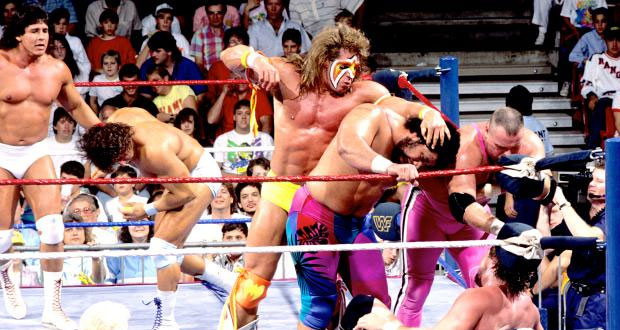 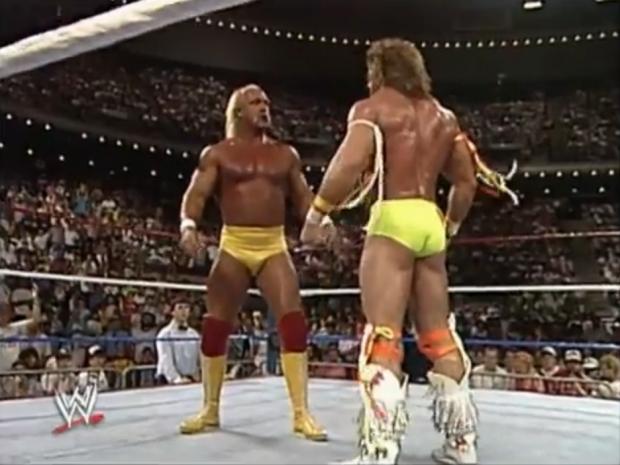 When It Comes Crashing Down and He Hurts Everyone!!!!

(About 100 people outside the ring, an equally yellow tighted machine, and a boat load of Hall of Famers can't stop the Immortal One)

Winner: 4/5 Stars-it had to be Hogan this time

Great Moment You May Have Forgotten: The Warrior/ Hogan battle is best remembered, but the battle between Rick Martel and his doppleganger Tito Santana, ravaged the early 90's Rumbles, beginning with this match.

Moment You Wish You Weren't Reminded Of: Rude coming in 10 seconds early was bad, but the worst booking choice is to have a no name mid-carder eliminated in 12 seconds to make room for the Warrior/Hogan battle. That mid-carder...just some guy named Shawn Michaels.

I can try to put it as nicely as I can but the first two Rumbles in 1988 and 1989 were....terrible at best. WWE needed to spice up this match in order to make this a mainstay, and there was only one sensible way to do it in 1990.

Have Hulk Hogan win of course.

1990 was really the last acceptable year of the Hulkster taking the main spotlight, and what better way to get him some champion pride than to win the all magical event. After last year being a sore baby when he was eliminated, this year made sense as the redemption year. But before we conclude, there are a lot of great innovations that make this Rumble a safe but fun choice, kind of like that gawky first teenage date between a couple (or at least before Netflix and chill became common place in our world).

This match improved on a lot of the problems that plagued the first two matches. For the first time, the fans really counted down from 10 to one when another superstar entered the match. It's a nice little touch (except for the time when they were torn between counting down and counting up for Polka Dot Dusty's punches). Also different was the end of the "ban" of managers from the Rumble. It got a little clustercussy at one point when Sherri, Fuji, Heenan, and Slick were all out at once, but it was a nice dichotomy of everyone in the match. Even Fuji and Heenan almost traded blows, a good touch to the growing involvement between outside personalities. Finally, this match had a solid, but not spectacular announce team of Tony Schiavone and Jessy Ventura on commentary. They are no means Gorilla/ Heenan, but they are certainly a safer choice and less irritating than Vince and whoever is sacrificed to him.

Overall, this was just a very solid Rumble match that paved the way for the growth of the competition. It starts off with Dibiase, the MVP of the match in my opinion, eliminating jobbers Koko B. Ware (ignore that Hall of Fame nod, I try to) and second fiddle Marty Jannetty. But soon the ring fills up with actual Hall of Famers, Jake Roberts (who never hit DDT...again), Randy Savage, Roddy Piper, Bret Hart, Polka Dot Dusty, and a very hard to watch Andre the Giant all grace the early portion of the match and enhance the talent from the previous two years. Sure we had some jobbers (Red Rooster), and Piper's awful elimination by Bad News Brown cheating, but it was a whole new feeling to watch all the best in ring at once. There was also a nice moment when Ax and Smash eventually came in and eliminated Andre from our hard to watch eyes, so they did the world a favor. (Andre should've called it quits after Mania 3, but that's just my opinion).

Eventually after appearances from more poor fitted giants (Earthquake, Akeem), mediocre wrestlers (Jim Neidhart, Dino Bravo) and third degree murderers (yea I'm looking at you Snuka), The Ultimate Warrior came in and did he running clothesline and tired shtick. A few spots later (and the first of the many Strikeforce battles where you can't tell who is who), in comes Diety Hulk Hogan, and the house begins to clear. Out goes Haku in an awful missed boot to the face. Out goes Dibiase, who made a new Rumble record of 44:47 at the time. Out goes Honky Tonk Man. Out goes Strikeforce. Out goes Michaels for some reason way too early. Until there was two...

Yes!!! Hogan and The Ultimate Warrior go face to face, mano y mano. They lock eyes, the crowd goes insane, the moment we have been waiting all match happens. Hogan with the push, Warrior pushes back, they do some sort of merry-go-round with the ring....and they clothesline each other down.

After that preview of what would happen in a few months time, we only had 4 more wrestlers come in (the Barbarian, Rick Rude, Hercules, and Mr. Perfect). If you ignore Rude coming in 10 seconds early for some dumb reason, the ending went about as you would expect. Warrior, valiantly trying to stay alive by the goonies, is "accidentally" pushed out by Hogan, a man who never hogs the spotlight. Barbarian and Hercules spend little time so they can return to juicing lifting weights for next year's Rumble. Then in a 2 on 1 attack, Mr. Perfect "accidentally" eliminates Rude when he tries to save himself, leaving us Hogan and Perfect for the ending. If you've seen one Hogan match, you've seen them all. Perfect goes to town on him, hits his finish (which is a pin, so what good is that gonna do genius?), Hulk no sells, Hulks up, and returns the favor, giving a return beating to Perfect, and unceremoniously throws him out for the win. Hogan looks like he's conquered the mountain and no one can stop him....until Mania when Warrior got his revenge for not Hulking up as well.

This was a solid Rumble overall that did not take as many risks as we have seen in recent events, nor goofy gimmicks, but also didn't go too far out of its way for awful gimmicks and enormous shenanigans. The little things were put in place and I would best describe this Rumble as something of a great training video if you were teaching future generations how a basic Rumble performs, sans Vince Russo.

Wear a monocle and have some tea and caviar while watching the match. Tomorrow's match features some of the most painful injuries I've ever seen, plus one man gets revenge on another man for the previous year's elimination. The numbers are dwindling faster than my bank account as we approach the number 1 Rumble of all time.