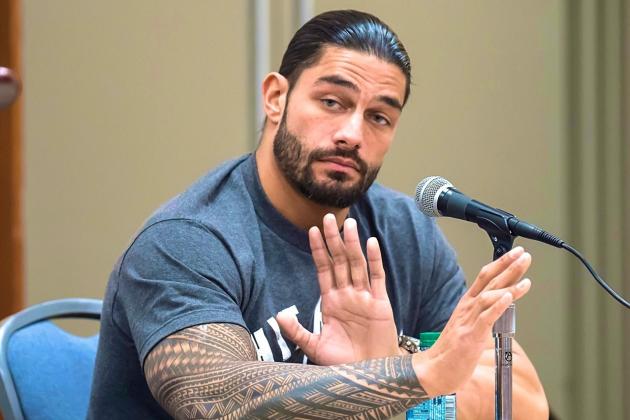 Do I mark out when his intro hits? No.

Do I boo him out of the building? No.

Do I get excited during his matches? Occasionally.

Not exactly the reaction you want for your "biggest star" since John Cena.

To be clear, I know my opinion is not the end all be all most important one that there is. We all have the right to mark out over who we want, boo who we want, or call for a push to a certain WWE superstar. Would I love for WWE to book a different way? Absolutely. However, I've come to terms with the fact that this is the Roman Reigns era. So what exactly is my problem with Roman Reigns?

It is so hard for me to invest in a character that when he steps in the ring all I'm wondering is, "how is Roman going to defy the odds this time?" Seriously, when has Reigns ever been pinned clean since he has been in WWE? Even The Face that Runs the Place takes one, two, MAYBE three a year. As for Reigns, never. I get that they want to make Reigns look strong but this is getting pretty ridiculous.

I was in attendance for WM31, and when Brock vs. Reigns began and Brock was pummeling Reigns there was no one who believed that Reigns wasn't going to win still.

Ok let's break this down.

Brock Lesnar from WM30 to WM31: Starts off by beating THE FREAKING UNDERTAKER at Wrestlemania. Goes on to make a mockery of JOHN FREAKING CENA at Summerslam. Then retains by interference of Seth Rollins (Praise Kneesus) which if you watch Brock was in the motion of kicking out of the pin and it would have been before 3. Then wrecks shop on John and Kneesus at the Royal Rumble. Few appearances, but a dominant year.

Roman Reigns from WM30 to WM31: The Shield defeats Kane and New Age Outlaws. Ok. Then back to back Shield wins against Evolution. Ok. Fails to grab Money in the Bank because, well, John Cena. Next is Battleground where of course he loses but is nowhere near the pin. Reigns beats Randy Orton at Summerslam followed by a 3 PPV hiatus due to injury. Comes back to help Johnby taking out Big Show at TLC to a "meh" reaction after being gone. Ok. Then wins the Rumble and proceeds to beat DB in one of his best matches at Fastlane.

Now back to Mania, where people were all thinking out loud about how he was going to overcome and beat..Brock Lesnar?? If I'm living in Kayfabe World, at this point in his career, no one should be able to beat Brock. Yet here we were wondering how that was going to happen. He put on a great match with Brock, the entire section I was in was loving the match. Then a dead Reigns was beaten by a fresh Seth. Crowd loved it, we marked out, went home happy.

Of course after that Reigns wasn't going to be beat clean for awhile. But almost a year later and still no loss? Hell I only named matches from WM30 and on and there were barely any times he was pinned and of course none of them were clean.

If I hear his music hit and the only thing I'm thinking is how he overcomes or what kind of shenanigans will be pulled so he doesn't lose, then something is wrong. Can I book better? I'm no Adam from Whatculture so probably not. I'm not here to say how they should do anything, just that a clean loss coupled with less of the promos that are worse than listening to a teachers nails on a chalkboard, just MIGHT get people to get behind Roman Reigns.