Lucky Dolph was there to stop it getting worse...

Please note that I had another article all written, but that had to do with Hogan- so it's being rested for a little while. And there was another that I have almost finished that was to do with Bubba the Love Sponge. All in all, my timing over the last month has been a bit off...

I also apologise for the delay between articles.

Wrestlemania 29 had a card that was, let's face it, a little...stale. Two out of the three most high profile matches on the card had been done in the past 12 months and the other one- CM Punk vs the Undertaker- for all of its greatness; could not hide the fact that Mr Punk was being shunted off to the side again to make way for a match we'd seen before in the main event spot.

However, today's article isn't really about any of that. Today we examine one of the matches with an angle that seemed to be on fire only weeks before the big PPV, only to lose so much steam by the time it reached there that the match is now essentially forgotten less than 3 years later.

It would be safe to say that 2012 was a strange bag for Alberto Del Rio. Coming back the night after Wrestlemaia 28, he made his intentions clear that he was aiming to take the title of World Heavyweight Champion off the new babyface champ Sheamus.

Some day this series will reflect on that horrifically interminable feud and the damage it did to both men's careers as well as the World Heavyweight Championship, but suffice to say that Del Rio wasn't seen to be going anywhere fast by many in the WWE Universe.

But that didn't count on the fact that Del Rio had a massive asset in his corner.

While many were indifferent to Del Rio's character, there is no doubt that his manager and ring announcer Ricardo Rodriguez was becoming somewhat of a fan favourite to many. Thus, in a rare moment of clarity, the WWE used Rodriguez as a 'damsel in distress' in order to turn Del Rio from entitled heel to Hispanic hero at TLC at December 2012. From there he found himself embroiled in a World Heavyweight Championship match on the 11th January 2013 against the Big Show, who had been attacking Ricardo. In a pretty good Last Man Standing match, Del RIo defeated Show to become the new World Heavyweight Champion.

If Alberto Del Rio had a fairly ordinary 2012, then the 2012 of Jack Swagger was pretty dire. After winning the United States Championship early in the year, he proceeded to lose it to Santino Marella in March (yes, that is correct). After that, he lost the favour of Vickie Guerrero, and was essentially relegated to glamourised jobber status before going on hiatus in early September.

And then he came back with this guy: 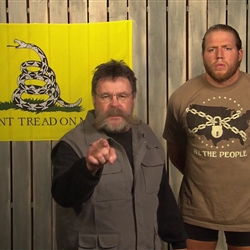 It was no secret that one of Jack Swagger's weaknesses as a performer was his promo work and so the notion of putting him together with one of the best wrestling minds in the business in Dutch Mantell seemed like a great idea. Repackaged as Zeb Colter, he and Swagger began positioning themselves as spokesmen for an America that had been left behind due to illegal immigrants who had been taking away jobs and opportunities from honest, hardworking Americans.

As opposed to, oh I don't know, Mexican-Americans like one Alberto Del Rio.

At the time that this feud was going on of course, the American people were witnessing a new political movement rise up known as the Tea Party. Mistrustful of the establishment politics of both parties, and wary of notions of Big Government that the Obama Administration seemed to be advocating, the Tea Party looked to Republican figures like Sarah Palin and Rand Paul rather than the Beltway insiders of John McCain and Lindsay Graham.

It must be said that it is rare that the WWE gets so...topical and like many times the WWE is actually topical it actually missed the boat. By the time that Wrestlemania 29 rolled around it was 2013 and the Tea Party was on the back foot a little after President Barack Obama was swept back into power the year before. So when we say that the WWE had its finger on the pulse, it must be said that the pulse was a little weak and arrhythmical by this stage...

Even so, this was good idea right?

Let's face it, there were two major problems with this feud before we get to the angle itself.

I would say that one of the worst things that the WWE did with Alberto Del Rio was to let him bypass developmental. Guys like Seth Rollins, Sami Zayn, Dean Ambrose and Kevin Owens have all had glittering careers before they came to Stanford, but the WWE was sensible enough to give them some time to show them how to wrestle and perform 'the WWE way'. Because while there are plenty of good matches with Del Rio in the WWE, there are very few matches excellent matches.

And there was another glaring problem with Del Rio as well.

Jim Ross on his Ross Report continues to bemoan the lack of 'true heels' in wrestling anymore and that they don't realise that their job is to get the audience to empathise with the hero. While I agree to a certain degree with what Ross says, I have to say that perhaps a bigger problem is the fact that the faces WWE wants us to cheer ain't the people the WWE universe often feels like gravitating to. So you can blame Bray Wyatt for not getting enough heat, but the guy can't work miracles if the guys he's facing are Roman Reigns and John Cena.

Part of the problem was his finisher- this might be just my opinion but a move where you essentially place an arm in a spot where it can dislocate or can break is a heel finisher. The Sharpshooter and the Walls of Jericho work as submissions for faces because they look nasty but not in a way that would do permanent injury. The Hell's Gate works as a face finisher because Undertaker does it from his back- often from what looks like a position of disadvantage.

But what was worse for poor Alberto was the fact that the turn and the winning of the Championship all took place over the course of a couple of weeks in possibly the most slow part of the WWE calendar- after TLC and before the Royal Rumble really kicked into gear. People didn't really get a chance to accept Del Rio before he was World Heavyweight Champion and supposed friend of the underdog.

Well, at least the heel was in good shape...

The thing about Jack Swagger is that for all his amateur wrestling ability, he has never been able to mask the fact that he cannot perform with the mic in his hand. And while on one hand that makes the idea of a manager a good one, it does also sort of exemplify the fact that the guy is a bit of a charisma vacuum. And I would love to say that Dutch Mantell helped, and he did for a bit, but then people began laughing at what he said rather than being outraged by it. This wasn't helped by the incredibly catchy "We the People" chant that Mantell and Swagger would do all the time which eventually got people from the audience joining in. It was like watching an episode of the Colbert Report- where the audience were in on the joke.

But not everyone was laughing...

Radio Host and Tea Party darling Glenn Beck had gotten wind of the Zeb Colter and Jack Swagger schtick and suffice to say was not amused- insinuating that conservatives should boycott World Wrestling Entertainment and labelling them "stupid wrestling people".

Stupid or not, the WWE had the chance to really wind this up into a hot feud for Wrestlemania- which by the time Beck intervened was still a good six weeks away. The thing was that instead of being clever and allow the feud to slowly heat up until it was really hot on the go home show, the WWE got all excited and essentially poured a huge can of petrol on the embers by asking Beck to come on to Raw and then getting Michael Cole to try and get an interview with Beck in a pre-taped stunt. Both were interesting ideas, but also 5 weeks away from the friggin' PPV. Which meant that the angle essentially had nowhere to go. For 5 weeks.

At least before this happened. 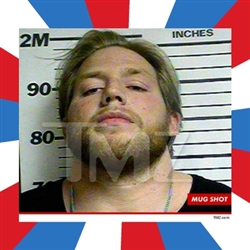 So, you're in a World Title Match at the biggest event of the year and what do you do? Get busted for DUI and drug possession and thus suck any speculation about who may win the match out of the arena. Any smark with half a brain knew that Vince was not going to even attempt to put a World Title on a guy who had just been cruising around stoned. What sort of message would that send to the sponsors?

And then we get to the match which was incredibly...meh.

Firstly, Swagger and Colter apparently came to the ring in a cool buggy. I say apparently, because since I wasn't there I didn't freakin' SEE IT because instead I saw a snorefest of a hype video. There is every chance this was because of Swagger's indiscretions but there's no reasons that people who are watching the PPV should suffer for this!

Then, Zeb Colter came out and cut a pretty ballsy promo in one of the most cosmopolitan regions of all of America which, to his credit, got the crowd fairly damn hot...then hands the mic to Swagger who with three words manages to suck most of the energy right out of the arena again.

As for the match...It's actually not too bad. Granted it's not fantastic, but as matches go it actually tells quite a nice story. What lets it down is everything that came before it and the fact that the result is sooo predictable. All it proves is that despite these two wrestlers abilities in the ring, their booking and characterisations let this program down severely down.

And that's article 48. Next time we have our first look at the little engine that could, Mr Heyman's company ECW. See you then!