What did we expect?

On Saturday, August 22 of 2015, Bayley completed what was essentially an almost-two-year-long run for the NXT Women's Championship. She beat Sasha Banks, the Boss, so badly that it took a top rope poisoned Frankensteiner followed by a Hugplex for the victory. The sight of the new champion, the gracious Sasha Banks giving her some respect, and then Charlotte and Becky Lynch coming out to complete the excellent image of the Four Horsewomen saying their farewells to NXT…those are the moments that one records for the history books. Those are the moments that let you know that you are witnessing something special.

I have to hand it to the WWE: In all of my life consuming…well, any form of media entertainment, actually, I have yet to see something so wonderful get buried by something so stupid.

But the thing is, there is usually a method to the insanity. You watch a dumpster fire, and you know why things went bad. You know that the reason True Detective, Season 2, was a mess was because without Matthew McConnaughey and Woody Harrelson delivering hellacious performances, the world finally saw that Nic Pizzolato's dialogue and storytelling abilities are overwrought, overdone, and in desperate need of an editor with the balls to say "No. This isn't profound. This isn't meaningful in a sort of nihilistic way. This is stupid." You know the reason that the Star Wars prequel trilogy failed is because George Lucas, in the years between Return of the Jedi and The Phantom Menace, mistakenly came to believe that the franchise's success was rooted in the flash and bells and whistles of CGI and what we saw visually, instead of its schmaltzy charm that comes from combining a pastiche of space opera tropes and a love of Flash Gordon serials. You know that, in the end, what tends to kill creative endeavors is not a sense of malicious oversight, but rather very talented people being stricken with a momentary case of incompetence. This isn't a bad thing; it's human nature to get full of yourself and think everything you create is the greatest thing known to man. That's why you have people around you that have the guts to tell you "Hold on a second, here…"

But Sunday and Monday night, and what happened with the women that labor under Vince McMahon's empire? This felt different. This didn't reek of incompetence. This reeked of malice. Of self-loathing.

If you managed to watch SummerSlam without your connection freezing out once every fifteen seconds, you might have watched the hyped Three v. Three v. Three match between nine women that are supposedly the banner women of the WWE's #DivaRevolution. It started about a month ago, when Stephanie McMahon "turned face" and took the Bella Twins to task for, well, if we're being blunt, being a bunch of bitches that needed to get a reality check. Cue the calling up of NXT darlings Charlotte, Becky Lynch, and Sasha Banks.

…Who were then slotted into three-women tag teams, with names so terribly uncreative it felt like it was deliberate. Team B.A.D. vs. Team Bella vs. Team PCB. As if the dreaded "Team Jacob vs. Team Edward" garbage from Twilight was meant to be taken seriously and not in the ironic sense the rest of the world would end up using. Team B.A.D., for Beautiful And Dangerous, which is about as subtle as Vince can get while still being patriarchic. Team Bella, the only rotten name that fits the vapid characters these women are forced to play. And Team PCB, taken from the first initials of the women who make it up. They don't even get their names anymore: Just a couple of fucking letters that sound closer to a hallucinogenic drug than a team name.

Meanwhile, Nikki Bella's Divas championship collects dust on the sideline, as the WWE eagerly awaits the day they can blare about her becoming the longest-reigning Divas champion in history, while they quietly work to get fans to forget about that geeky chick and her husband who might be the first man in the history of pro wrestling to say "Fuck you" to Vince McMahon and mean it. Forever.

What did we expect?

On Sunday night, at SummerSlam, we watched a mess of a tag match. The rules were confusing. An elimination match where if one person on the is pinned/submitted, the entire team is out? Why not just make it a regular three-team match like the Tag Team match earlier in the night. Most likely because that would require legitimizing the match itself and the people in it. There were a few botches. The crowd sat on its hands, as if unable to figure out what the hell was going on. And, worst of all, it wasn't always that way.

See, there was a glimmer of hope early in this match. The crowd, surprisingly so, was starting to chant. A most beautiful, hopeful chant. 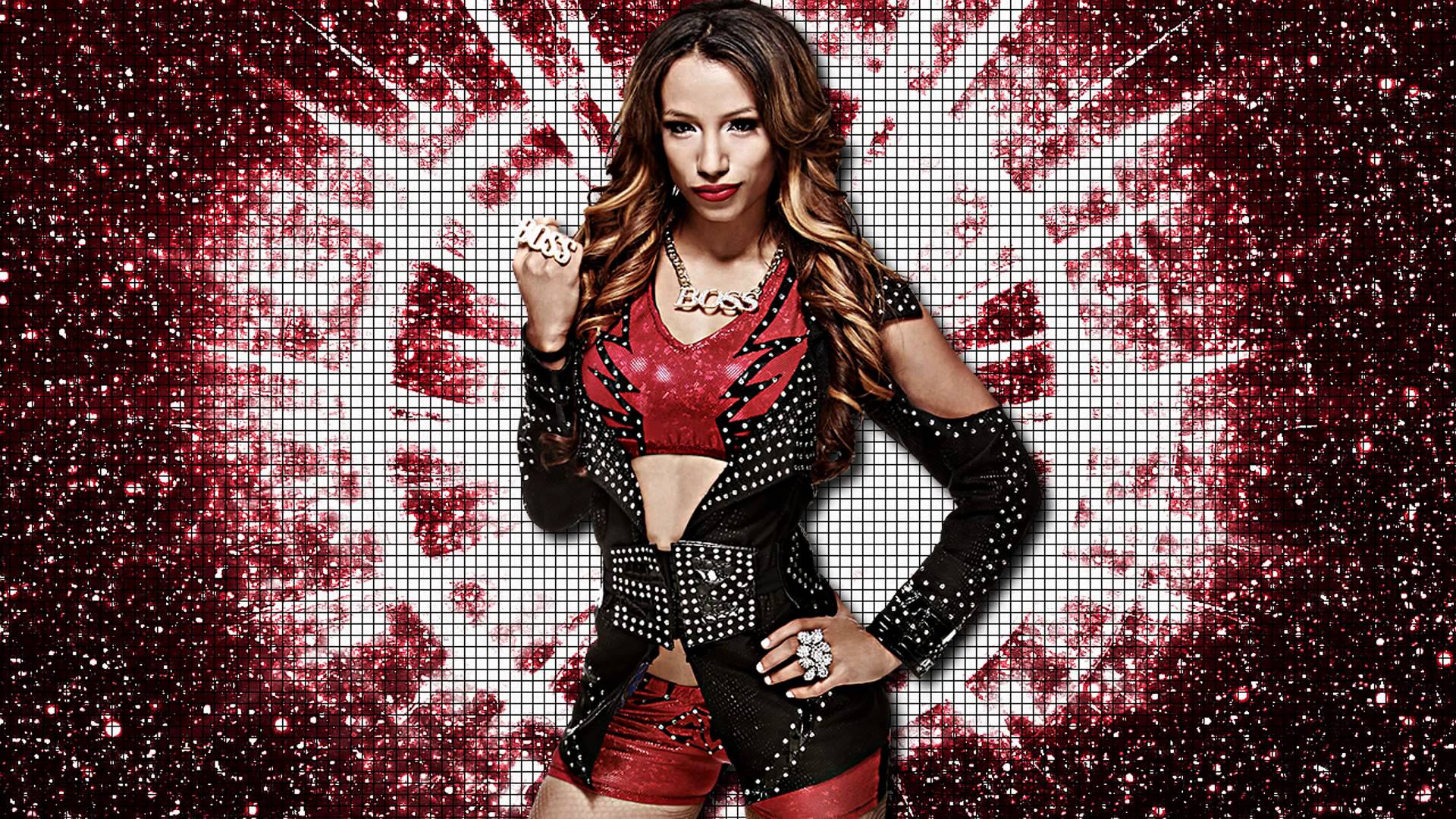 That right there should have been the moment. The moment where Vince McMahon woke up from his fevered dream of holding onto an era and WWE that no longer existed, and realized "Wait…that sounds like a star in the making…" The crowd, a main event crowd, was chanting for someone new. Someone fresh. And someone awesome.

Someone who commands a room, someone who can usher in the next generation. Someone with the swagger of the Rock and technical ability to boot. Someone whose cross-promotional opportunities are endless thanks to her very famous cousin, Snoop Dogg. If this was to be anyone's coming out party, I would have bet money on it being Sasha's.

And I would have been made to look a fool, for not two minutes later, Team Bad was eliminated when Tamina Snuka ate a cheap pin.

You could feel the air let out of the arena. No one cared about Team Bella or anyone in that group. And Team PCB never had a chance. Maybe if their name had been changed from the unfortunate "Submission Sorority" to something a bit more marketable, even something as corny as "The Tapout Trio" or "Team Tap-Out", they'd have a backing. You could sell shirts and gear for them, in connection to the much vaunted partnership that WWE allegedly has with TapOut Brand.

But that would be making money in a way that Vince McMahon didn't originally see. And we can't have that.

The ending of that match was perfectly forgettable. So Team PCB won by defeating Team Bella. You know what would have really capped off the start of a Women's Revolution in WWE? If Team Bella was the first team to go. The crowd wakes up. The announcers and Team Bella are dumbfounded. And just like that, you've got several women that you're about to turn into made women.

Instead, we got that. And then we got Monday Night Raw, where Miz was in the center of it all and did no small part in helping the crowd chant garbage. And in the middle of it all, Nikki Bella said this:

What is the fucking point? Why should I give a damn about any of this if the performers themselves, in kayfabe, claim that none of this matters? Who cares? Who cares? Not even the champion does, so why should I?

This is not a revolution. This is the Ministry of Love going to work on Winston Smith. This is 2+2=5.

And this is not just an issue that has a sole culprit.

We here at Cageside Seats tend to think that the fault of all belongs to two men: Vince McMahon, for being an easily swayed and out-of-touch old man, and Kevin Dunn. The infamous Executive Vice President of Television Production, whose alleged self-loathing over being in a medium where he'll never win an Emmy is so high that he takes it out on the women by whispering in Vince's ear that they aren't anything special. That they don't matter. That they're eye candy.

A fair point, for sure. But in the end, this is also the end result of a product whose brain trust is still firmly stuck in a time period where women were supposed to be stay-at-home all the time, every day. And heaven help you if they tried to compete! They're too delicate.

This is the end result of a product that seems to follow the Fabulous Moolah style of wrestling, which was based on slaps and hair pulls and snapmares and being eye candy but not technical ability because god forbid Moolah actually work in the ring. And that's not getting into the allegations against Moolah's "training" methods to the young women that came to her, in the hopes that she'd help further their dream.

This is the end result of a product whose boss allegedly remarked in horror about women in the UFC "But…someone could die!"

Ronda Rousey, Miesha Tate, Cat Zingano, Gina Carano, God I'm gonna run out of names…they all would have a rather different opinion.

This is an issue that runs from top to bottom. This is what happens when you don't look for new minds to create. When you don't have outsiders who have their thumb on the pulse of pop cultural zeitgeist. Where you still have people like Michael Hayes, Johnny Ace, and more as the only bookers of authority. If you don't acknowledge the times you are in, you will be left in the past. Or left to wonder why, no matter what you do, those pesky ratings never break 5.

When Bayley won the NXT Women's Championship, she was crying. So were the other three in the ring with her. So too, I imagine, were a large portion of the audience. They'd witnessed a beautiful thing.

And Bayley got to see her dream realized. She's a champion. And she did it with her friends. Of course she cried. Wouldn't you?

But I wonder, deep down, if a small part of her tears were not just because this was the greatest moment of her career...

...But because she knew that it would never again be as good as this.