When Hideo Itami comes back from shoulder surgery in about 2-3 months, the biggest question mark surrounding his return is going to be a simple one:

Who took Itami out in that parking lot the day of NXT TakeOver: Unstoppable?

Assuming that The Rock doesn't have some secret vendetta against Hideo Itami, and that Rikishi is not making a grand return to WWE on an NXT contract, we have three main suspects for the attack. Those suspects are the three men who had something to gain by Itami getting injured: Tyler Breeze, Finn Balor, and Kevin Owens.

It's probably safe to say that NXT is not going to run with a storyline of Tyler Breeze as the culprit.

As he often is, Breeze was largely an afterthought in the triple threat number one contender's match at Unstoppable, and had just concluded a decent feud with Itami that had a satisfying ending. It's unlikely that they will return to that well, especially since the only bit of story that Breeze even had heading into the match was that he was feasting on the growing competitiveness between Itami and Balor.

Taking that into consideration, plus Breeze's status as an opportunistic heel, would mean that having both of them in the match might actually be to Breeze's advantage. He's definitely the most unlikely of the three to have taken Itami out.

Kevin Owens is the obvious choice as the attacker.

He's shown a willingness to brutally attack anyone who poses a threat to him, or that happens to piss him off on that given day, and after having already beaten Balor in an NXT Title match, it's possible that he perceived Itami as the biggest threat to his title reign. Not to mention, he just happened to show up on the scene of Itami writhing in pain on the ground, dryly noting that it was "a shame".

But despite all that, such an attack wouldn't be very characteristic of Owens. He's shown a vicious side, but he's never been secretive about it. He's upfront about his actions, to the point of almost seeming proud at times. He's the type that would own up to an attack like this, not lie about it. There's also the fact that by the time Itami returns to action, Owens will be on the main roster full-time, so if Owens was the culprit, then the storyline will likely be abandoned (or postponed 'til Itami's call-up, anyway), so that seems unlikely as well.

That leaves our third suspect, Finn Balor, as the likely culprit.

Recent developments, as well as a closer look into what we've already seen but that may have slipped under the radar, presents a possible fourth suspect to the attack.

The biggest thing that seems to point to The Demon as a suspect, as well as being a separate entity from Finn Balor himself, are three recent commercials that the WWE Network has been running during NXT. Ever since Balor first donned his body paint at NXT REvolution, fans have wondered whether the paint would be a war paint style focus that Balor uses to get psyched up for big matches, or whether there would be a supernatural aspect to it. The commercials airing on the Network seem to point to the latter, when the wording of the commercials is examined:

We all have two sides to ourselves. Some people try to ignore the darker side. Some are able to suppress it. The question is: should we choose to embrace The Demon inside?

Can we fight our true nature? Become something we are not? Can we use our light to conceal our darkness? To bury The Demon below

We are always at war with ourselves. We hide behind these costumes, these facades. Is this really who we are? Or are we just trying to hide what we've become? The Demon within.

Prior to these commercials, the body paint had never had an explicit answer as to whether it was for show or representative of something more. The wording here make it seems like The Demon is, at the least, a separate entity, even if not something supernatural.

All three commercials also featured a demonic voice speaking while Balor did, while he also physically underwent transformations to The Demon, and back to normal Finn Balor again. The Demon voice was unintelligible in most of them, except the third, where it could be heard saying "I am the Demon King", "You can't stop it", and "Let me out!" It seems that The Demon is, in fact, inside of Balor, and it wants out.

Taking a look at the paint jobs for the three NXT specials that he's got painted up for seems to be significant as well. In the first appearance of the paint, at NXT REvolution, it was in its simplest form. 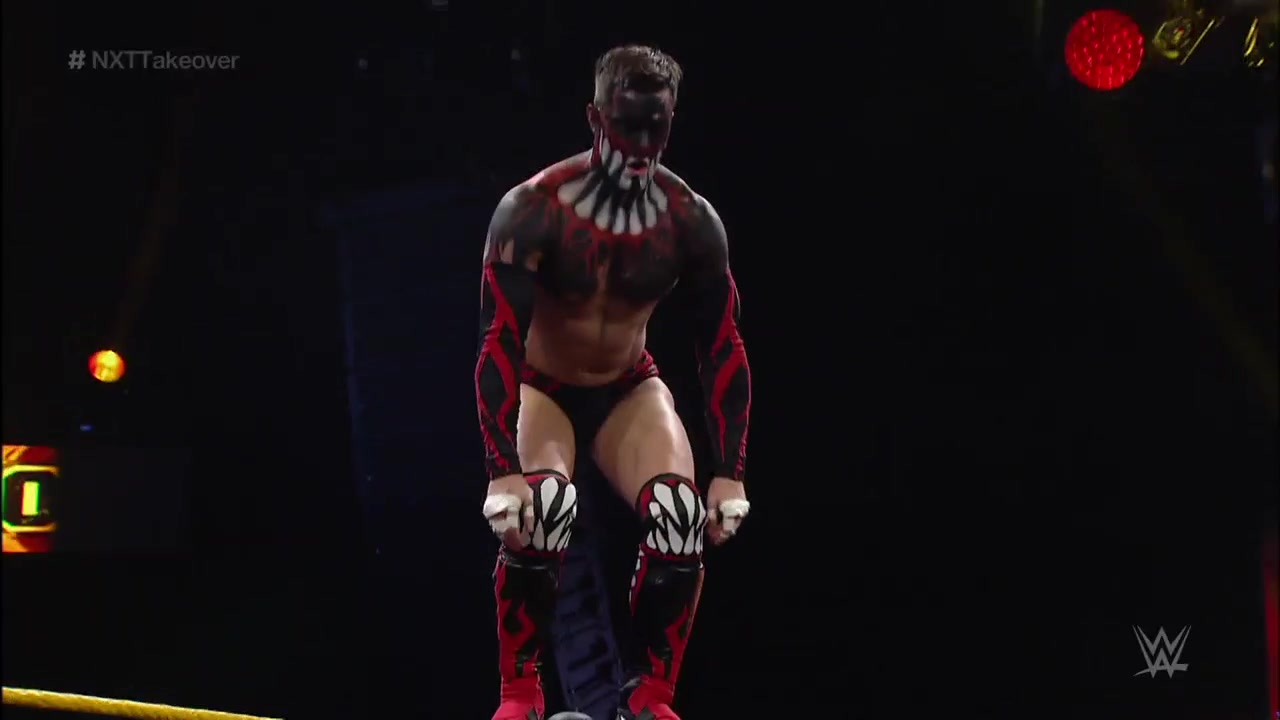 It's just the simple fangs/claws around his throat and mouth, and the rest painted black with red accents throughout.

Then, when he made his entrance for TakeOver: Rival, he added a bit to it. 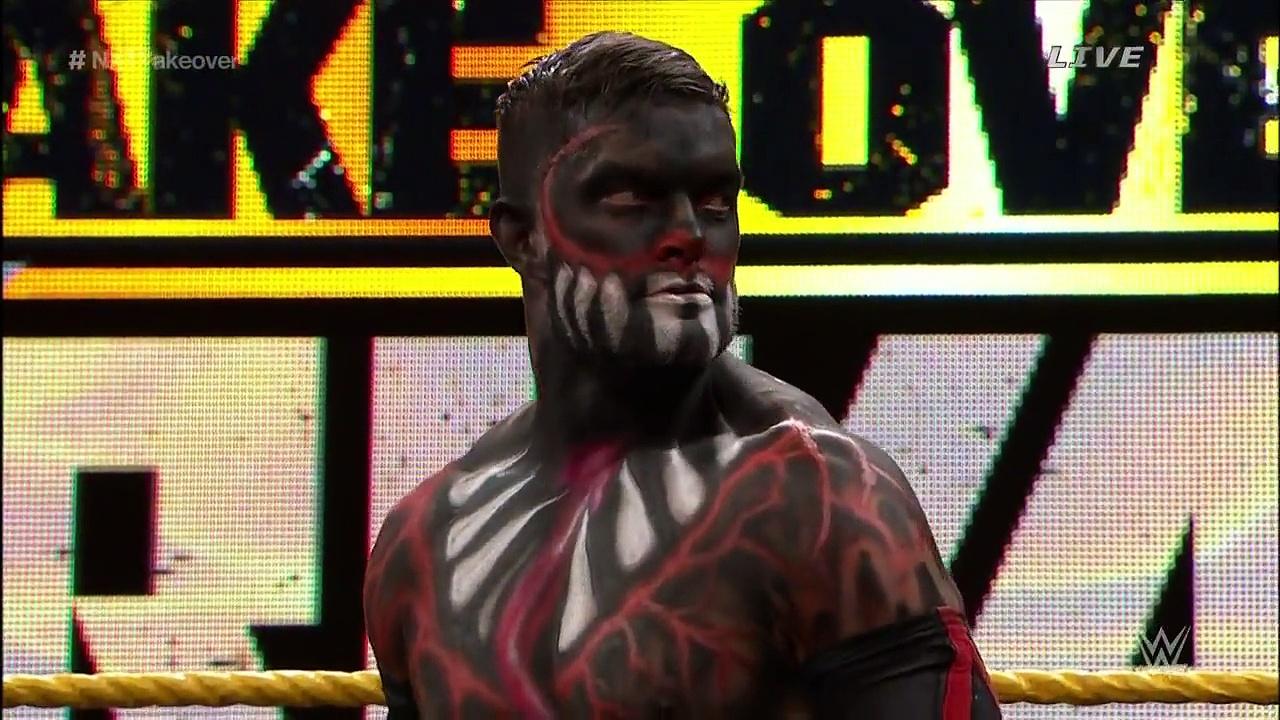 For this, he added the tongue slithering down his chest. He also added a set of dragon-esque wings to his back, which previously had no specific design.

Then came NXT: Unstoppable, which featured some of the most glaring changes yet. 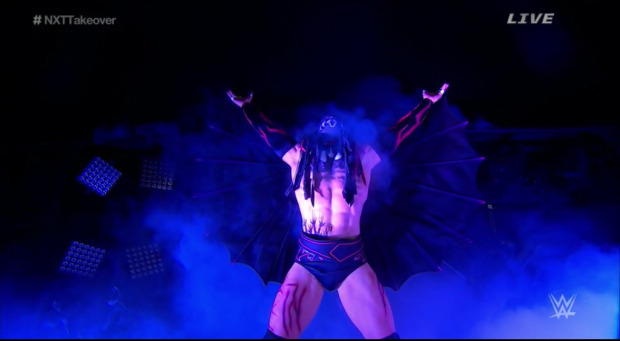 The core paint stayed largely the same, save for two big differences. He now has what looks like claw marks on his thighs, and added the Eye of Balor to his back.

Balor took his name from a figure from Irish mythology. According to legend, Balor was a supernatural creature, and king of the Fomorians, commonly thought of as demons. And in the commercial mentioned above, The Demon voice refers to itself as "The Demon King".

Additionally, Balor was a one-eyed giant, and it was said that when he opened his eye, it destroyed all in its wake. At NXT: Unstoppable, Finn Balor had the opened Eye of Balor painted on his back, and what happened to the two men in his way on his quest to become NXT Champion? One was beaten down in the parking lot, the other layed out in the center of the ring.

It's safe to say that Finn Balor, the man, won't be turning heel any time soon. His friendship with Hideo Itami is well documented and often referenced, and the three part mini documentary on his journey to the WWE has him painted as a Lego-obsessed, super babyface.

However, it's possible that the angle coming out if Itami's injury could be that The Demon King is clawing its way to the surface, and Finn is losing control. This could lead to a simple retribution feud between Itami and Balor, or even one where Itami tries to save his pal from The Demon that is consuming him and taking over, as Balor slips farther and farther into darkness.

Either way, the groundwork is laid out for The Demon to rise and for the WWE to potentially have its first decent supernatural gimmick since the Attitude Era Undertaker.