The June 23 Raw episode irked many, but not all.

Much of it had to do with the booking of Lesnar amongst other things. But something else that caught my eye (or rather ear) during this episode of Raw was the positive crowd reaction to the Bella twins during their match with SlayNaomi and Tamina. And that got me thinking... Let's do a little comparison, shall we?

Face? Heel? Why Should I Care, Again?

At first, I'll admit I was intrigued by the Bella-Naomi/Tamina matchup on Raw.

The story was there: Naomi and Tamina hated the Bellas, but also did not trust Paige (with good reason). Here they were in a match against the Bellas, and they would obviously want to beat the crap out of (and in the process humiliate) the Bellas. Fine. We also had the Bellas, also heels, along with Alicia Fox (sighs), who would want to prove their complete dominance over the women's division. A heel vs heel matchup like this had some potential for nuance and interesting storytelling.

Throughout the bout, Naomi and Tamina (Naomi especially) heeled it up. Talking trash, making Brie kiss Naomi's boot, etc. Overall, very heelish work in the ring. And the crowd booed accordingly. What was interesting to me here though was 1) the Bellas appeared to work the match face (playing to the crowd at several points) and, perhaps consequently, 2) the crowd cheered them for the duration.

Now, let's back up a few weeks to the June 1 Raw. Nikki Bella defended her Divas Championship against Paige. Prior to this, she and her sister Brie appeared to be in an odd, almost tweener phase having turned kinda face after the Daniel Bryan injury came to light. They seemed even more on the face side of things during their Naomi/Tamina feud.

And then this happened:

Twin Magic made it's highly un-anticipated return to WWE. I mean, that's a heel move, isn't it? A full blown heel turn? Blatantly cheating to win, so the Bellas are heels now, right? If there was any doubt as to whether the Bellas were heels or faces in this Paige feud, they should have been squashed (heh) at Money in the Bank.

So why were the Bellas working face during their match with Naomi and Tamina (to the point where it was almost out of character) and why was the crowd (most of whom presumably saw MITB) cheering them as if they were faces? Was the crowd just going along with how the Bellas and others worked the match?

I would say yes.

The cheers increased throughout the bout as the Bellas were positioned as the babyfaces in peril (despite technically having a 3-2 advantage). By the end of the match, it's pretty safe to say most of the crowd was Team Bella. And given how this match was booked, it takes little reasoning to understand why.

But stepping back and considering the wider story, how Paige is attempting to rally the other women to defeat the supposedly heel Bellas, this match made little to no sense whatsoever. Isn't Paige supposed to be the face rallying the troops to face the evil Bella twins? Why not have Bellas and company beat down on Naomi and Tamina so even they have to consider joining Paige to unite against a common foe?

Or at the very least, pose the Bellas as a dominant threat that needs to be taken out, not cheered? This was just another senseless booking decision for the women of WWE (essentially business as usual).

It's been just one month since we had Sasha Banks and Becky Lynch put on a classic match that had nearly everyone's praise. A lot of that had to do with the stellar in-ring work those two demonstrated, but we were also invested in their characters, including Becky who had recently undergone a bit of a face turn of her own.

Becky Lynch had been aligned with Sasha Banks in a heel alliance, but tensions began to rise between the two when they were both entered in a fatal 4-way for the NXT Women's Championship at NXT TakeOver: Rival. Naturally, they both wanted the championship and were more than willing to go through each other to get it.

While Sasha won the title at Rival, Becky quickly became the No. 1 contender after winning a triple threat against Charlotte and Bayley.

That's a rather heelish way to win a match, wouldn't ya say?

And then Unstoppable happened. As the buildup to the match went on, it was clear Becky Lynch would be playing babyface against the heel Sasha Banks.

But as the weeks went by, it certainly didn't feel like a sudden face turn for Becky like what we've become accustomed to on the main roster. We understood her desires, her goals, her feelings. Her motivations were very clear throughout the passing weeks. We empathized with her.

That's what made this moment in particular so very poignant. 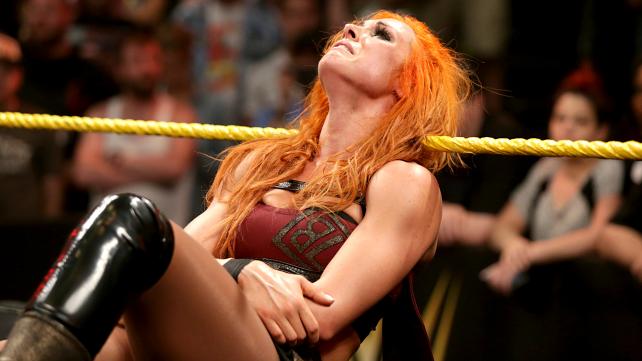 How is it that Becky Lynch could go from heel to face within just a few weeks in a way that actually enhances the audience's investment in her character, but every heel/face turn of the Bellas just confuses and complicates whatever their characters are supposed to be?

In NXT, we're given a reason to care about to care about nearly every female character in the division, heel or face. When they turn, we're along for the ride. We care.

Yet for women on the main roster, we don't know what to think. There's little logic or sense in their turns. And with so many is so little time, such turns contribute little to any actual character development, which means little audience investment or understanding as to what is going on.

Why should the audience care long term about the women of main roster WWE if there's little reason to invest in them? Will anyone outside the IWC really care if/when Nikki breaks AJ's record? They could if they were given a reason to. But turning these women willy-nilly, with little rhyme or reason, for a night or two is not going to give them a reason to.

Maybe I'm just preaching to the choir, but this last episode of Raw for me was yet another example of how as much as things change and improve in NXT, the more that stay the same on the main roster. One month since Sasha-Becky, three since Sasha-Charlotte in San Jose (which Vince McMahon reportedly loved), and we have little change to speak about for the women of main roster WWE.

What more do these women have to prove in order to be given a chance on the main roster?