When Jim Cornette was yearning for a champion who could go to the well and pull out that all-important seventh move...

We often complain in the IWC about the WWE's over-reliance on one John Felix Anthony Cena. And yes, it's true that the WWE seem to be somewhat at a loss to contemplate what life would be like After Cena. However, there have been times in the past where Vince and Co. did give the ball to a newcomer and let him run it to the end zone in a way that few since could ever envisage.

In 1994, WWE had a bit of a problem on its hands when it came to talent. Their main event player- Hulk Hogan- had left the year before for WCW. Not to worry, you may say, WWE had a ready-made replacement in the Macho Man.

Except he had essentially got so pissed off with the idea that Vince thought that he was only worth being an announcer that he upped sticks and left for WCW himself.

Essentially, this forced the WWE's hand a bit and led to the founding of what became known as the New Generation Era- where guys like Bret Hart, Shawn Michaels, Razor Ramon and the Undertaker were pushed as the future of the product.

Oh, and one more. 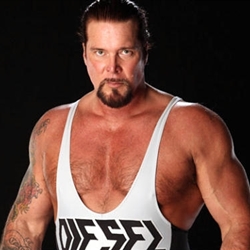 While Hogan and Savage saw more prosperous futures in WCW, it would be safe to say that Kevin Nash was sorely glad to get out of the place when he arrived at WWE. It seems bizarre that WCW couldn't think of something good for the 200+cm 300 pounder (well, maybe not that bizarre- this is early 90s WCW after all...). Instead they had him dressing up as the Wizard of Oz and a Vegas mobster.

Strangely, these gimmicks didn't see him get to the top...

So Nash came to WWE in 1993 and was imbued with the monicker Diesel and soon became associated with one of the hottest new names in the WWE- Shawn Michaels. What better way to slowly learn your craft and get yourself noticed that in association with one of the most talented performers on the roster.

So when Michaels eventually turned on Diesel in Survivor Series 1994, it seemed like a logical move to push Diesel onto the next Main Event stage by igniting a feud between the two that could go on for a few months.

Instead, the WWE had Nash defeat Bob Backland for the title in what I assume was the last non-televised World Title change ever.

It must be said that looking back now with main event talent including the Undertaker, Razor Ramon, HBK, Bret and Owen Hart it does seem a little odd to put the belt on Big Daddy Cool. However, as much as we today may say that the notion of Diesel as WWE Champion was clearly doomed from the start, it's easy to see how Kevin Nash would have appealed to someone like Vince McMahon.

For a start, Nash was big- giant in fact and at a time when Vince was dearly missing Hogan and having to rely on *gasp* average sized wrestlers the notion of placing the title around Diesel's waist must have been very tempting. Secondly, there was something...fresh about Diesel's character. During a time when Bret Hart was best known as being a really good Canadian wrestler and HBK was known for being a bit of a pretty boy, Nash stood out- as a bad-ass from the wrong side of the tracks. Female wrestling fans who found Micheals a bit too glitzy and prissy could see Nash as the alternative. Finally, by giving Nash the title, the WWE were able to emphasise that this was a company looking forward, rather than the stale old WCW.

So why didn't it work- or rather, to put it more accurately, why did it fail so spectacularly?

For a start it has to be stressed that the WWE were in a massive period of transition. Essentially after telling everyone for years that the guys that really mattered were Hulk Hogan and Randy Savage they had to do a total about face and say that they were old fogies that nobody cared about any more. The trouble was that Hogan and Savage never really put the new main event players over because Vince was worried about keeping Hogan and Savage onside (particularly Hogan). This meant essentially WWE had main event players who were in all kayfabe terms inferior to the ones WCW had poached from the WWE in the first place.

Add to that the way Nash got the championship- in a non-televised squash match- didn't help matters either. Rather than build him towards the championship and then give him a big PPV moment, Nash seemed to be handed the title as a an afterthought- something which today seems almost inconceivable.

The second problem is, well...Diesel is kinda big. Huge actually. And the problem with big champions is that you really have to earn the notion of them as a face champion. And, well, WWE did not help the situation with the way that they booked the guy. Instead of having him face a hated heel first off in order to cement himself as a cheered babyface, Diesel' first opponent was...Bret Hart.

And he didn't win. The WWE have Diesel face the Excellence of Execution at the Royal Rumble- arguably the second biggest show of the year and had to settle for a no contest. How does this help put Diesel over as a compelling champion?

In fact, the first heel he faced was...Shawn Michaels.

Now don't get me wrong- Michaels could play a great heel against bigger opponents- his legendary feud with Undertaker proved that. But, well, Michaels was chasing the title here. Against Undertaker the feud worked because you couldn't wait to see the Deadman get his hands around the prissy little man's throat. But against Diesel it was clear that he was the one who was driving the notion of a match. It was all a bit weird. As BIGPALE has pointed out, it was watching David and Goliath where Goliath is the face.

All this was made worse by the fact that VInce thought it would be more prudent for a footballer and a tag team wrestler to headline instead of the WWE Champion.

At least Nash is a hell of promo, you may claim, having seen him with the nWo.

The thing is, the nWo suited Kevin Nash's style of promo work down to the ground in that it allowed Nash's natural intelligence to shine through. Though he's not as nimble on the mic as someone like CM Punk, what he is good at as drawing heat from a crowd by being an insufferable jerk who thinks because he's big he can bully everyone on the roster.

As a face though, Nash really didn't get the time to develop his character. So instead of a compelling babyface champion who stood for something (Hulk Hogan, John Cena) or a face champion whose character/mystique and miles on the road earned him the respect of the fans (Undertaker) Nash was just sorta...there. The more time he wore the championship, the more it seemed like the rough and ready edges to his personality that made him seem so endearing had been smoothed over.

And while we're on the subject of blandness, there's his matches.

Nash went into wrestling because his first career in basketball was cut short after his knees were irreparably injured. There is no doubt that while Nash would go on to have a great career in pro wrestling, that knee injury really crippled the way that he could operate in the ring.

It is interesting to note that probably the most famous wrestler to come from a basketball background is the Undertaker. Because he was able to keep his knees sound until he came to wrestling it allowed him to become arguably the most mobile big man in the history of the business.

Y'see, a big man who can explode out of the corner is great to match up with a little guy- as the little guy start looking like he has the momentum when all of a sudden- BLAMMO! Little guys like HBK, Bret Hart, Daniel Bryan and more are geniuses at selling for this sort of thing. The trouble is that Nash never really had this. Hell, if someone could tell me a time when Nash ran during his time in the ring, I would appreciate it. And without that sort of explosive move or that iconic athletic move...it was difficult to see what exactly Nash could bring to the table that would make for a good match.

This would be all very well if he was a transitional champion but instead Nash was the champion for what was for all intents and purposes a motherfucking year. Essentially, it seemed that Vince thought that he could create a champion by using the belt and time, but what it did instead was suck credibility out of the title as people began to wonder why this guy was the new WWE champion. At a time when Diesel sorely needed something to latch onto as a reason for the fans to find him compelling, Vince played for time- something he never did when establishing Cena, the Rock or Stone Cold Steve Austin.

Mind you, look what he had to work with too...

And that's article 42. Next time we take a look at a red hot wrestler and the bucket of cold water poured over him.