This Saturday, I attended NXT in Albany, NY with my brother and my 5-year-old daughter, April. This would be April’s first time going to a live sporting event bigger than a high school football game. Before leaving, my wife warned me to "be extra careful and protect April from any dumb, drunk wrestling fans." Wrestling fans get a bum rap in general, but I was somewhat surprised to hear the stereotype in my own home. I let her know that I had absolute confidence that April would be perfectly safe.

My family used to have NY Giants season tickets and I have been to countless games. The Giants do not have a notoriously rowdy fan base, yet in nearly every game I attended I witnessed a fist fight or a heated argument in which security needed to intervene and remove one or more parties. I once saw a drunk asshole scream obscenities at a young boy wearing a Cowboys shirt. I was pretty confident that there would not be a Sasha Banks fan screaming at April because she wore her Bayley shirt.

April wore her shirt proudly and held up her hand-made "Bayley Hug Me" sign with the excitement that only a 5-year-old possesses. Our seats were along the entrance ramp, but on the opposite side of the barrier. During the match word got down to us through the grapevine that everyone in our row wanted to make sure that April got close enough to meet the Hugster. Sure enough, after Bayley and Alexa Bliss defeated Becky Lynch and Dana Brooke, April squeezed and crowd-surfed her way to the entranceway with me two steps behind. The man at the end of the row, a father with two young kids of his own, propped April up against the barrier where she could hold her sign up with all of her might. If that wasn’t enough, as Bayley and Bliss came down the ramp, everyone in the area began yelling and pointing at April to make sure that she could not be missed. Bayley came over and planted a bracelet and hug on April in an awesome moment that April and I will never forget. 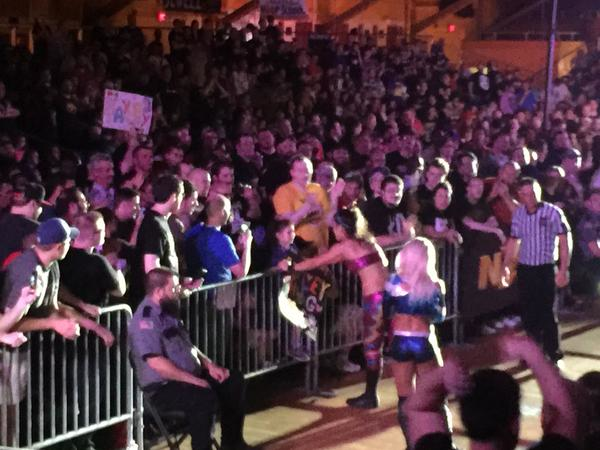 Next time I see some jackass snatch a foul ball out of the hand of a child or see a football fan spill his beer on the kid in front of him, I’ll take comfort in the fact that most wrestling fans are cut from a better cloth. Even if the rest of the country has no clue.

And special thanks to whichever fan captured the moment and put it up on YouTube...