Yes, today we delve into the archives of WCW and recall one of the most erm...captivating promos ever committed to wrestling television.

There is an old saying about television that it is often at its most interesting when everything goes wrong. That the most meticulously plotted and acted BBC period drama cannot match the sheer tension of a live TV show when the band has forgotten their cues, the guest is drunk and the host is irritated because he didn't get that sweet gig on the better network.

Well, in 1993 WCW had a moment like that where many a wrestling fan stood for about 5 minutes glued to something so tragic and yet so funny that it has been remembered throughout the ages.

Soon, at the upcoming War Games PPV, the Road Warrior Hawk had to be pulled from the eight man tag team match after an injury, leaving a mystery partner to accompany Sting, Davey Boy Smith and Dusty Rhodes as they faced off against the fiendish Harlem Heat, Vader and Sid Vicious.

At Clash of the Champions XXIV on August 18th 1993, the heels confronted the faces about who would be their fourth partner in a months time. At which point Sting said "All I have to say is, our partner is going to 'shock' the world, because he is none other than... The Shockmaster!"

And then this occurred.

Before we'd move onto the bleeding obvious problems with this particular clusterfuck (i.e. the Shockmaster himself and everything surrounding him), I'd just like to say that to be fair, the promo up to this point is not great. Someone really should have realised in WCW's time that giving Sid Vicious a microphone was not a great idea. He's one of those wrestlers that seems to scream everything at 10 000 decibels and yet come off as flat and monotonous.

And what's worse, because he shouts, everybody else has to try and shout over him which looks incredibly dumb. If today's WWE were constructing this promo they would allow for both guys to say their piece in order so you didn't get the sense it was just chaos. This seems like a bunch of 8 year old trying to put on a play.

Poor Davey Boy Smith comes off especially bad, as he is the one who has to try and shout over Vicious and calm him down while at the same time trying to segway to Sting so he can reveal the big surprise. If you watch the clip above, you can see him yelling three or four words ("STING!! TELL THE PEOPLE!!! WHO OUR SECRET PARTNER!!! IS GONNA BE!!!") at a time and having to take a big breath so he can shout more and not let the big stupid idiot who clearly doesn't know squat about cutting a multi-hander promo get a word in edgeways.

Oh, and whoever gave Sting that line introducing the Shockmaster needs a major kick up the arse. You have the chance to put a guy over here a little by getting a major WCW star to introduce him and that's the line you give him? Compare that to the way that Ted DiBiase introduces the Undertaker (incidentally, this article will have several 'Taker vs Shockmaster comparisons as they have a few commonalities. Both debuted at a multi-man tag match, both are colourful gimmicks, and both used a bit of smoke and mirrors) and there's an immediate difference.

But all of this pales, pales in comparison to the real problems with this whole segment. The Shockmaster himself.

To be fair to Fred Ottman he does recover quite quickly, but the thing is if you are wearing a mask/helmet and it falls off, you look like a schmuck- no matter how quickly you put said mask back on your face.

And while we're on the subject of attire... 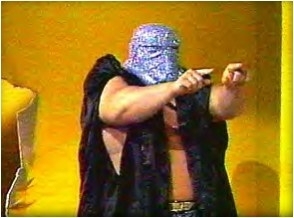 Look, I'm glad WCW had a Bring-Your-Child-To-Work Day but I don't think the tykes need to be so hands on with the costuming of its wrestlers...

In all seriousness, compare that with the imagery one gets when one sees the costume of the Undertaker, or Mankind. In those cases there is a method behind the garb that the wrestlers are wearing so that when they come to the ring, they don't have to act that ridiculous because the costume justifies their performance.

Let's start with the helmet. Who, by Odin's eye-patch, decided that dumping a Stormtrooper helmet in some glitter was really going to come off as 'cool'? There's an old saying in advertising that an ad gives you a window into the psychology of the company. Well, that helmet essentially told me that either a) WCW seemed to think that Star Wars wasn't really much of a pop culture phenomenon and so it would be all right to use it for the Shockmaster even though they clearly just went down to a toy store and got it which would infer that there was some merchandising clout behind it or b) WCW knew that Lucas Arts were a powerhouse company but didn't care because they believed themselves to be below Lucas Arts' notice.

There is no way, even in the horror days of the Monday Night Wars that Vince McMahon would ever, ever sell his company short by showing something that could be construed as looking 'bush league' but that's exactly what that friggin' helmet did for WCW.

And then there's the poncho and jeans combo. Look, I realise that when it comes to finding a concept for 'the Shockmaster' the world isn't exactly bursting with archetypes. But I've seen the concept art that went into the thought process for both the Undertaker and Mankind before they debuted. What possible work went into this?

And then he cut the promo.

Well, in reality Fred Ottman didn't cut the promo. That was Ole Anderson out back who sounded like he had eaten a whole bag of lemons. Ottman just attempted to make some hand gestures in some vague sync with what was being said. Apparently the 'creative team' did not trust Ottman to cut a menacing enough promo so they gave to Ole, who comes out with the following dialogue (I think- it is a bit hard to discern):

So you're the man who rules the world. They call me the Shockmaster. You've ruled the world long enough Sid Vicious. Get ready. C'Mon you wanna piece of me? You wanna piece of me? Come and get me. Come after me Sid. I'm ready along with Davey Boy, Sting and Dusty Rhodes. We'll see you at the Fall Brawl at the War Games. Until then...AHAHAHAHA!

Now imagine that in a stupidly growly voice while the body is doing body gestures that don't quite sync. Not to mention the fact that Ole seemed to be making some effort to keep his growl going, which meant that a couple of times the emphasis of words comes off as strange- like he's finishing a sentence when he's really just trying to suck in some air so he doesn't ruin his own throat. Furthermore, why bother having a mask if he's going to speak long promos like that? If you have a mask that covers you're entire face, you shouldn't speak much at all. Look at Kane in the early years and see how menacing he was because he let the mask do the work for him. Admittedly in this case, the mask isn't as good but that doesn't change the fact that you now have an idiot in a helmet giving a long promo.

But this was made all the more difficult by the way that they introduced the character onto our screens into some sort of weird pseudo talk show. Too much of the job of putting this guy over is in the hands of the guy himself. Compare that to the Undertaker, where on his debut came out to Gorilla Monsoon's amazing commentary and the Million Dollar Man's introduction and Jim Johnston's iconic funeral dirge and already Mark Calaway's job is made that much easier. Then all he has to do is concentrate on wrestling.

Let me put it another way. In 1989 Michael Keaton was cast in Tim Burton's classic Batman. Many questioned whether Keaton could actually pull off the presence of the Dark Knight, but Burton made it easier by putting Batman over as a legend before he even got on screen. By the time he does come on screen, he's already established as a bad-ass and the idea of a criminal sobbing as the Dark Knight has him by the lapels doesn't seem like a big jump to make.

In 1990 WWE managed to do a similar thing with the Undertaker. Granted, they were lucky that the guy they got for the gimmick was one of the most gifted big men in the history of professional wrestling, but they gave him a great platform to go on to bigger and better things. In 1993, WCW managed to shoot a new gimmick squarely in the foot and left the wrestler burdened with it.

And that's article 39. Next time we look at what happens when a wrestler is fed too much. See you then!