Wars are often ugly things. Too often innocents are hurt and the Monday Night Wars were no exception.

Extreme Championship Wrestling, was a wrestling territory ahead of its time. Founded and ran by mad genius Paul Heyman, it was one of the few wrestling franchises that managed to adapt to the increasingly massive conglomerates of WWE and WCW by attempting to make themselves different rather than attempting to rehash the past. To paraphrase Heyman himself, in a world where wrestling was still seemed like Hair Metal, ECW tried to be more like Nirvana.

I had wrestling games when I was younger, which is how I found out about wrestlers in the WWE. But my first wrestling Pay Per View that I ever saw was an ECW PPV (I think it was Living Dangerously 1999) on a VHS. Watching the brutality and the athleticism of some of the spots that these workers were willing to go to both shocked and fascinated me.

Many die-hard ECW fans would have you believe that the Monday Night Wars was between three franchises- a three-way dance if you will (thank you). In fact it would probably be safer to say that if WCW was Germany and WWE was the Soviet Union ECW was Poland- as both WWE and WCW ruthlessly pillaged as much as they could from the fledgling wrestling brand.

To be fair WWE was actually quite conciliatory at times with ECW, allowing some of its workers and managers like Jim Cornette and Jerry Lawler (who famously whacked Tommy Dreamer in the plums with a fucking Singapore cane) to turn up at ECW events while ECW stars would do the same on episodes of Raw. Vince also paid Heyman to help foster his company as WWE saw ECW as somewhat of a feeding company for some of their best superstars (after all, Mick Foley and Steve Austin both came from ECW to WWE).

WCW's attitude towards ECW and their brand on the other hand can be summed up in one concise picture. 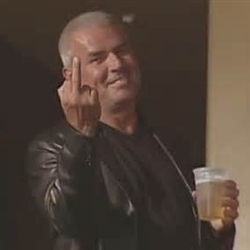 WCW seemed to regard ECW as beneath them- which it was- but the contempt that Bischoff and co. continued to pour on Heyman's promotion was not lost on the Philidelphia crowds of ECW. As Mick Foley said, the ECW fans may not have liked Vince McMahon but they respected him but they hated Eric Bischoff with a vengeance as they saw him as relying on old fogies like Hogan, Nash and Hall rather than pushing new interesting workers.

In early 2000, both WCW and ECW were in a pretty perilous state. Both companies were haemorrhaging cash- with Heyman's ECW looking particularly bad due to the fact that Heyman, for all of his booking genius was not a businessman with any sort of nous. WCW- at least for prospective wrestlers was operating under the umbrella of Turner Broadcasting which could recoup its losses.

It was in this frame of mind that Vince Russo and Eric Bischoff- attempting to re-do the success of 1996, began scouting outside WCW to bring in new talent. Since WWE had learned from WCW's talent grab, WCW had to go further afield and set their sights on Mike Awesome- ECW Champion.

Russo and Bischoff offered Awesome a massive deal to go to WCW- a deal that Awsome verbally agreed to. However, Heyman said that Awesome had 3 years left on his contract- a major obstacle to WCW's plans. In fairness, while Heyman did have a current contract with Awesome, Heyman had been overdue with Awesome's payments for some time.

After a good deal of negotiation, eventually a compromised was reached. Mike Awesome would come out on the Arpil 10th Nitro to aid the New Blood (a bunch of rising stars that Russo and Bischoff were *ahem* trying to push) by attacking World Heavyweight Champion Kevin Nash. In return, the announcers would put over the fact that Awesome had a title defence on ECW on the 13th April at Indianapolis and Awesome would NOT do a promo.

So how did this go?

It would be nice to think that WCW were simply incompetent in the way they fucked this up, but the way they have treated ECW in the past makes me think not. Sure, Mike Awesome came out and attacked Nash in a pretty good moment, but the only mention that the announcers made about the ECW title match was the following quote:

"Doesn't he have some kind of title defence?"

I don't know Mr WCW commentator, DOES HE?!?! Maybe it would be best if you, the announcer whose job it is to inform me of such things TOLD ME THE FUCKING DETAILS!!!!!!

But it gets better. Instead of Awesome keeping his mouth shut, Awesome got a mic and said the following:

When I heard Russo and Bischoff were back in the saddle here in WCW, I knew that this was just to suh-weet an opportunity to pass up.

No wonder Heyman was pissed. Not only did WCW fail to put over his ECW Championship match, the defending champion essentially said that WCW was the place to be- taking a massive dump on the notion that the ECW Championship was something to strive for. So it looked like WCW wasn't going to get Awesome at all.

It must be said that Paul Heyman was very generous with his talent. If there was a talent who felt that he could make it to the big two, Heyman was happy to let him leave. Having said that, why on Earth would Heyman merely roll over after what had happened on Nitro. And thus a new deal was reached where ECW were paid a six figured sum in order to get Awesome out of the company, as long as Awesome could drop the belt on April 18th.

However, what Heyman decided to do next would backfire significantly...

Heyman's idea for Awesome's last match was at least ambitious. He got one of his former workers- the now WWE wrestler Tazz to come back and face Awesome in a match for the ECW World Championship. In essence, Heyman was booking a WWE guy to face a WCW guy for the ECW Championship- a move Heyman hoped that would bring legitimacy to his brand.

The trouble was that the match went for approximately one and a half minutes and at the end of it Awesome simply got up and left, making it all seem like it wasn't much of a big deal to lose the ECW World Championship and thus harming the prestige of the title significantly. If it was a marquis match where Tazz and Awesome tore the place down for a good 15-20 minutes then perhaps Heyman could have used it to leverage more fans to tune in to ECW. As it was, all it did was seem to emphasise how far behind WCW and WWE Heyman's company was.

The irony of all this back and forth for Awesome was that he had suddenly become one of the hottest topics in wrestling. So...a worker that could go in the ring who was still relatively young (35- young for WCW standards anyway)- surely Russo and Bischoff would find a way to make him a main ev-

Instead, Mike Awesome found his time in WCW playing a guy stuck in the seventies, as well as "the Fat Chick Thrilla" (I am almost ashamed to quote that)- a wrestler who made *ahem* larger women swoon.

Did they give him a run in the main event? Nope.

Did he win any title during his time at WCW? Nope.

Was he shunted around a bloated midcard- held down by politics and bookers who were looking backwards to try and find the solution to the future? Yes.

And the really sad thing is for all of this, WCW were here before with this guy. 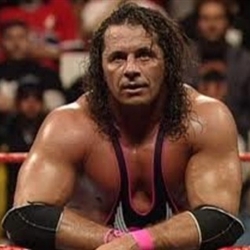 Mike Awesome is no Bret Hart. But like Hart he was a talented wrestler who was the talk of the wrestling world. Rather than capitalise on that momentum, however, WCW found themselves once again to run with the ball and take a risk that may have made WCW interesting, or god forbid, NEW.

As for ECW, it found that losing Awesome was another nail in its coffin. Soon the talent pool was drier than ever and the failed experiment on April 13th made them look increasingly like the third horse in a two horse race.

And that's article 49. Next time is a multi part article to celebrate the 50th edition of this series of rants and ravings. Be prepared though- it's going to be...Intellectual.