Welcome back to the regular series! Today we look at wrestling through impressionist dance...

Everyone who has been in the wrestling business knows the political machinations that occur behind closed doors. The locker room of a wrestling promotion has enough backstabbing and intrigue to make Machiavelli blush. While people such as Vincent Kennedy McMahon may protest that the best wrestlers will rise to the top and grab the brass ring, there is no doubt that those who can play the game better have an easier road to the top than those who cannot. Two of the best at the game were Hulk Hogan and Shawn Michaels.

In the mid 1990s both men preyed on the anxieties of the respective owners of their promotions to ensure that they got the best deal possible. Michaels and his Kliq was known in the WWE as constantly being in the boss' ear- persuading him to change results and booked matches in order to ensure that they looked better as a result. Hogan, on the other hand, as someone who had creative control in his contract, found all sorts of ways to prioritise himself ahead of the promotion and thus leave WCW having to accommodate his whims more and more.

Fast forward to mid-2005 and both men had moved through quite different paths. Michaels had gone through a hiatus from the wrestling business and had come back seemingly a changed man. He may have been 40 years old but there was no doubt in many minds that the matches he had with Kurt Angle earlier the same year had shown that he was as good as ever. Likewise, Michaels was now seemingly in a place where championships no longer mattered to him as much as great matches and angles. He stole the show with Chris Jericho at Wrestlemania 19 and helped Chris Benoit become a legitimate champion at Wrestlemania 20 by doing the job in what was possibly the best Triple Threat match in WWE history. For all intents and purposes, it looked like the Heartbreak Kid had entered a more mellow phase in his life.

Hogan, on the other hand was 52 and had returned to the WWE for what was at ostensibly a Hall of Fame Induction. However, there was no doubt that with John Cena and Batista still relatively young to be carrying the torches as Faces-of-the-Franchise, the notion of having a tentpole like Hogan returning for a match or two must have sounded like manna from heaven to McMahon. However, it had to be handled carefully. He couldn't face Cena or Batista for their championships as the two champions were too green in the ring and a bum match would damage their championship runs badly. Furthermore, if Hogan got a championship match again, would he make life difficult all around by politicking until he got the outcome he wanted? But Vince did need to put him in a high profile match- possibly a headliner against a wrestler who could carry him to a good performance.

Enter Shawn Michaels. Born Again Christian. Enhancer of talent. Surely the man behind the Kliq was just a thing of the past.

Well, in normal circumstances, yes. But when provoked Michaels showed that he was as adept at the chicanery as Hogan was. 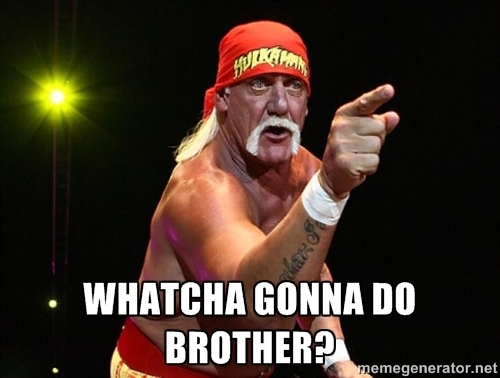 Y'see, Michaels had originally seen the feud as babyface vs babyface- much like say the Rock vs John Cena but Hogan nixed that idea and said that he wanted a traditional face vs heel feud with HBK as the heel.

And so it came to pass that on July 4th 2005, after defeating Carlito and Kurt Angle (there's a duo who have had contrasting fortunes in the business...) in a tag match, Michaels superkicked Hogan and left him laying in the ring. A week later Michaels demanded one more match from Hogan- challenging him to a match at Summerslam which Hogan subsequently accepted.

Now there is no doubt that Michaels was enjoying his face run and to throw it all away because Mr Hogan wouldn't play ball seemed to annoy him. He was such a great heel in 1997 because some of the obnoxiousness of the character was his own. Now he had moved past that but Hogan wanted him to revisit it.

So Michaels did a pre-taped promo that utterly changed the dynamic of the feud.

On the 1st August Michaels appeared in a Larry King parody dressed as Hulk Hogan and proceeded to eviscerate him in a fairly scathing way. Way before CM Punk was complaining about the backstage shenanigans that restricted his climb up the greasy pole, Michaels essentially accused Hogan of being a part time geriatric that wouldn't visit the small towns who would put himself over the good of the business. Couple that with some great comic timing from HBK and it made for a compelling segment that cut close to the bone. Too close, as we will soon discover.

Michaels did still play the heel despite this. One memorable segment was a promo in Montreal six days before Summerslam on the 15th August- anti-Michaels country at the best of times but when the guy comes out and starts with the line "Who's your daddy Montreal?" you know that Montreal will respond.

And did they ever. This may not be the best promo in the history of WWE but it certainly is one of the ballsiest. Essentially going back to the town where you stole the championship off the national hero and gleefully admitting as much before trolling the audience that he was going to confront you is pretty remarkable.

According to Michaels it seems the original plan for this angle was three matches, with Hogan (the part-timer remember) winning one and then returning the favour for Michaels before a rubber match. However Hogan's gotta Hogan it seems and just before Summerslam he told the WWE that he wouldn't do the job for HBK.

Essentially that meant that Michaels had just built up all this heat as a heel when he didn't want to for one match where he would lose cleanly.

So Michaels decided to let Hogan know how he felt in the ring. Not by working stiffly, which is how most would have done it but by overselling. Every second bump that Michaels seems to take in this match is accompanied by somersaults, cartwheels or barrel rolls as if he is afraid that Actors' Equity aren't sending him a big enough cheque.

Michaels' method of getting back at Hogan has caused debate to say the least. Some say that he should have been more professional and admitted that he was out played by a master politician. Others believe that Hogan's behaviour had gone unpunished for too long and it was somewhat galling of Hogan to jerk Michaels around like that when he would be the one that would carry Hogan to a half decent match years after his prime.

In this humble writer's opinion, the match would have suffered without Michaels overselling. Looking at Hogan through the match it is clear that he is far from fully fit and the hip and knee operations are catching up with him (whereas Michaels is bumping all over the place like a madman, Hogan, apart from the final sequence takes about 4 bumps that essentially entail him falling backwards onto his back in the ring ). When Michaels applies the Sharpshooter in a nod to Montreal '97, it looks pretty darn awful as poor HBK probably couldn't apply much pressure to Hogan's back or legs. Furthermore, as much as Michaels probably was acting unprofessionally, there is no doubt that Michaels' scenery chewing helped him to get through a match that was a good 5-8 mins too long for him at least.

In all honesty, the match is not a memorable one, more enjoyed for the promos it generated from Michaels rather than the wrestling itself. The pace is slow and while some matches tell a clever story with a slow pace this really isn't one of them. Far too often it just seems like Hogan needs to catch his breath rather than some clever selling or psychology (especially with the obvious two-knocked-out-refs overbooking). This is not helped by the announce team- I love JR to death but he is simply not right for calling the Hulkster as a babyface. While Gorilla Monsoon would come out with lines like "he's become impervious to pain!!!" without a hint of irony, JR just seems to be too focused on a factual approach to really get one to appreciate the larger-than-life personality of the Hulkster. Having King and Coach beside him doesn't help either, of course.

This match was historically significant because while Hogan may have won the match (and the original politicking game), the war seems to have been won by Michaels. Micheals continued to ply his trade with up and comers such as Randy Orton as well as having show stealing matches with other WWE luminaries such as Chris Jericho and the Undertaker. Hulk Hogan on the other hand went to TNA where he continued to dominate TV as well as political movements backstage- often to the detriment of the overall product. Even today at 61 years old he has claimed that he could have another match and even another title run in the WWE.

Many therefore look at this match today with the view that Michaels was one of the few to actually tell Hogan where to go and that his actions are at least partly justifiable. Despite the fact the match equates essentially with Michaels airing his dirty laundry in the main event of a major PPV, they point to the fact that Michaels' chicanery did little to harm the overall product and future of the business- which cannot be said for many of Hogan's actions.

It also must be remembered that the WWE was building a ready made modern Hogan in John Cena at the time. As Cena's popularity grew, the seeming need for Hogan began to wane- so much so that in the next year's Summerslam he was stuffed in the 3rd match of the card rather than the Main Event. Perhaps McMahon had seen that though Hogan was an attraction, he certainly wasn't attractive any more in the ring. It was time to look to the future.

And that concludes Episode 31! Join me next time as we take a look at WCW's obsession with celebrity. Oh, and make sure to check out the InVasion series as well!