While his wife was making millions of dollars on Friends, he was part of the real comedy...

Y'know sometimes I wonder if CM Punk looks back at his time in wrestling and counts his blessings. Yes, the WWE jerked him around and yes he was cut off at the knees just when he could have been the next big thing, but on the other hand he never had to deal with these guys. 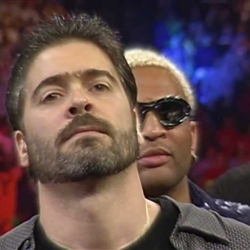 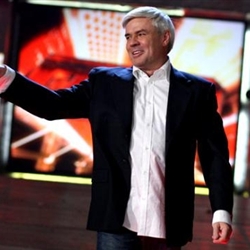 The year was 2000 and the Monday Night Wars were beginning to look bad for WCW, with WWE belting them in the ratings with its mix of interesting angles, hungry talent and good production. WCW on the other hand was a basket case with the locker room discontented with the politics that seemed to plague the promotion and prevented new ideas and wrestlers from ever getting a good look in.

So WCW decided to bring in a dream team of sorts- one that would lead the product back into the promised land.

It seems Bischoff was there mostly to work on the production side while Russo took over as head booker. Together, the WCW powers that be thought, their strengths would shine through.

Let's begin for a start for the genesis for this angle. Ready to Rumble was a movie that WCW produced that centred around two boneheads who were wrestling fans. The film opened to such rave reviews as "moronic and insulting" (Entertainment Weekly) to "the new worst movie of all time" (Orlando Sentinel). One of the stars of the film was David Arquette- comic actor and husband (at the time, at least) to Courtney Cox.

Now if this was the WWE, they would have promoted it through some lame angles- like they did with Larry the Cable Guy coming on Raw and hogging half the friggin' show with segments that were just horribly unfunny. But WCW thought they could do better.

David Arquette was allied with Diamond Dallas Page and with his help had defeated Eric Bischoff on the April 24 Nitro. Now in one of those wonderous moments of Russologic, Arquette was seen to have made an enemy on Thunder.

Jeff Jarrett- who claimed Arquette had cost him the title.

That's right- it wasn't Bischoff who was the primary antagonist to Arquette who Arquette had pinned two days earlier, but a wrestler who Arquette may as well have had a restraining order against for all the contact they had for each other up to that point.

And so in another episode of Russologic, Page and Arqutte took on Bischoff and Jarrett in a tag match, with the added stipulation that whoever got the pinfall would earn DDP's World Heavyweight Title.

Because Russo says so.

And so this occured.

And there was much wailing and gnashing of teeth...

The thing is, I think people actually get angry about Arquette winning the title and forget everything else that occurred subsequently. But there is so much more to get angry at!

Just suppose that you as a booker were given this steaming heap of a storyline the week after Mr Arquette had won the world title. You had a guy who had won the title by fluke, who wasn't a wrestler. What would you do?

You'd make him a heel. And not just any heel, but the ultimate chicken shit heel who continued to fluke victory after victory- and would parade like a peacock in promos and end up with egg on their face. Sort of like an uber-JBL.

Russo instead kept him a face. A fucking face. Not only that, but a face that got help defending the title against heels- essentially cheating to keep the title by the guy who had the title before Arquette did!!!!

But don't worry because he did turn heel the next week...

...In order to allow Jarrett to win the title by bashing DDP over the head with a guitar at Slamboree.

He explained himself to DDP the next night on Nitro by saying that his whole title run and friendship with DDP was a "swerve" and the only reason that he, Bischoff, Jarrett and the rest of the heels allowed DDP the title was that so that they could screw him later on.

It's a strange brand of maliciousness that makes heels give babyfaces a World Title, rather than just stop them from getting it in the first fucking place.

The sad thing about all this is the person who was the most reluctant in the whole of WCW that this angle should happen was Arquette himself. He was a massive wrestling fan who recongnised the heritage of the title and the people who had held it before him and the amount that the fans invested in it. Names like Flair, Sting, Hogan and Savage were all athletes and entertainers of the highest calibre and Arquette realised that he was not a person to belong in that list with them.

Unfortunately, Vince Russo was not of the same opinion and believed it would be great publicity for the company. To Arquette's eternal credit, he donated the money that he gained from this car wreck of an angle to the families of Darren Drozhov, Owen Hart and Brian Pillman- thus contributing more to the wrestling world than the idiot who booked him in the first place.

I could keep going on about the logical fallacies of this storyline and why it didn't work. Put simply though it was an angle whose historical significance was blindingly obvious. Not only did it essentially piss on a title that deserved better, it really symbolised everything that was wrong with Russo's brand of storytelling. He may have believed that Arquette winning the championship would have been great publicity, but how would you get any traction when his reign only lasted 2 weeks? Furthermore, why should we care about championships that don't seem to mean anything to the people holding them- let alone to the people chasing them and wanting them.

It would be wrong to say that this was the angle that spelt the end for WCW- it was on the way down before this. What this showed was the depths that people were willing to go to in order to attempt to grab that quick fix solution. Rather than examine the roster and attempt to find the next big thing, Russo was willing to play the short game and it bit him in the bum. And while this was happening nobody could arrest the direction that WCW was going in.

And that concludes article 32 in this series. Stay tuned for article 33 where it's another audience choice! Let me know what you'd like me to cover. And don't forget to check out the InVasion series!