Well, that happened, and let's unpack it.

WWE returned to pay-per-view (PPV) -- WWE Network for most of us -- last night (Sun., Sept. 21, 2014) with its Night of Champions event at the Bridgestone Arena in Nashville, Tennessee featuring a show that was fun for the wrestling in the ring but saw a main event finish that has fans up in arms.

Catch up on full results and the live blog by clicking here. Let's get right to reacting to all the night's events. 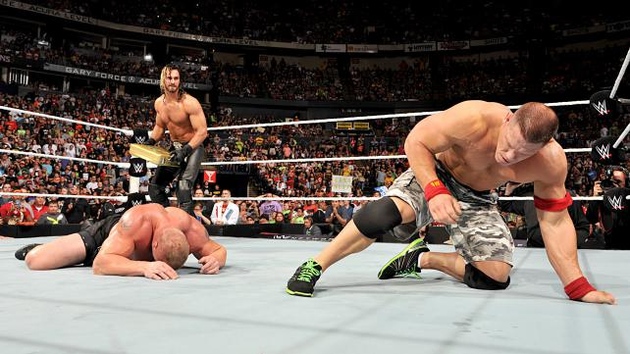 First, the bare bones: In the main event of Night of Champions, John Cena defeated Brock Lesnar by disqualification because Seth Rollins ran in and attacked Cena. This means that while Cena was victorious, Lesnar remains the WWE world heavyweight champion. Rollins attempted to cash in his Money in the Bank briefcase on Lesnar after his attack but was thwarted by Cena, who ran him off before taking an F-5 as the show went off the air with Lesnar's music playing, the belt still in his (death) clutch.

There's so much to unpack here.

The story going into this match, as told on the go-home show, was that Cena was going to have a chance in the rematch -- something he didn't have in their encounter at SummerSlam -- as long as he could exploit the openings, however small they may be. And, once he took advantage of as much, he couldn't let up. He needed to get the upper hand and once he did, he had to finish the job at all costs.

That's more or less how the match played out. He took another beating, sure, but when he found his opening, he mashed the gas pedal and didn't stop until he ran into a brick wall in the form of a Money in the Bank briefcase.

Lesnar, for his part, took a beating of his own. He got to give one last month and now it was his turn to take one. And he took it. He kicked out of every AA -- and there were four -- except for the last one, and even then you could argue he was getting his shoulder up.

Upon replay, it appears at least possible that Lesnar is rolling to get his shoulder up before the referee would have hypothetically counted to three. It's entirely possible this wasn't on purpose but if it was -- and that's a big if -- it was brilliant. This is a man who had taken four AA's and sat in the STF submission for an extended period on more than one occasion, and he still managed to roll to get his shoulder up.

He was, quite literally, unstoppable.

But Cena can always argue, or at least believe in his mind and, by extension, all his fans can believe in their minds, that he was going to win the match before Rollins came in and ruined it. Because we can't know for sure either way and that's undoubtedly the ambiguity WWE was hoping for.

As for Rollins, his appearance was somewhat more problematic. We have to question why he would run in here, and on the surface it's simple: He wanted to take advantage of Cena's hard work. Lesnar was vulnerable, so he ran in to capitalize on that.

The problem is he didn't act that way. What he did was run out, attack Cena, and once Cena was disposed of, he turned slowly to Brock and you could almost see the light bulb going off over his head.

That doesn't make any sense in any way here, at least not with the information we currently have available to us. He had remarked weeks ago on Raw that he wanted Cena in this match so he could take advantage of an opportunity that may present itself. That's what this was but, again, he didn't act that way from the outset. He presented himself like he wanted to attack Cena and the cash-in attempt was secondary after he realized he might actually be able to pull it off.

(Editor's note: I wanted to put a comment from the comments section below here because it does a great job of explaining Rollins running in from a viewpoint I hadn't considered or outright forgot about: "Remember why Brock was placed in the championship match in the first place. The Authority didn't want Cena to win the belt, so naturally, they would have a plan B if it looked like Brock was in trouble. Rollins was following orders, and it was only then, that he realized that he had a chance to cash in the brief case to make Daddy (Triple H) proud." Props to Cagesider Hollywood Rock for that. Great observation. This could very well mean that Lesnar's shoulder going up was on purpose and this can start a rift with The Authority over not having enough confidence in him and sending Rollins out. Or any other number of possibilities for the story. Again, great observation that I overlooked.)

Back to Lesnar: He then took a Curb Stomp -- better than anyone in the history of the Curb Stomp, I might add -- and was quite clearly all but finished. At this point, can we blame him? He's a beast, yeah, but consider the damage he incurred here. The reaction on Twitter I was exposed to the most revolved around disappointment that Brock didn't look strong enough but are we really asking that he eat that many finishers from Cena, and one from Rollins, and just no sell it?

That's not "he beat the streak, he should be untouchable", folks. That's the kind of thing that would kill the business. It's unrealistic to the point of downright blasphemy.

Let's also not forget that Cena is, without question, whether you want to cop to it or not, a legend in the industry. He is one of the greatest of all time. Lesnar took his best shot, something like six times over, and he still didn't lose. He may have come incredibly close, but he didn't.

And Cena, that legend he is, came that close to winning a match he was never going to win.

I won't argue that the finish was disappointing. Any finish that isn't clean will always leave you feeling like you invested in a story that didn't get a proper payoff. But I will at least attempt to see the forest through the trees and realize that WWE was quite obviously attempting to serve many, many masters here.

All told, when considering everything they had to consider, this may have been the best they could come up with. It didn't have anywhere near the impact the SummerSlam match did, but it set up the future quite well.

And, hey, Brock Lesnar is still the WWE world heavyweight champion. We'll forget this finish soon enough and he'll still have the title while Cena is chasing Rollins around before moving on to some dumb feud with Rusev.

Let's just take this as a win and move on, shall we? 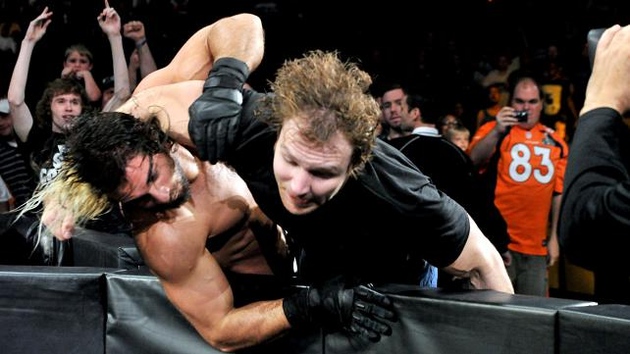 This show featured a lot of good wrestling that suffered for not having good stories attached to the matches. If the finish in the main event didn't infuriate you -- like it didn't for me -- this was a fine show.

That's it from me, Cagesiders. Now it's your turn to sound off in the comments section below with all your thoughts on last night's show. How did you like it, if you liked it at all?