Better known as the Scorched Earth approach to bowing out.

At the end of the day, when it all boils down to brass tacks (excuse the mixed metaphor) wrestling promotions live and die with the talent that is in the ring. They are the ones who are putting their bodies on the line night after night in order to try and make the crowd pay their hard earned cash so it makes sense that they should be appeased.

In the old days of the territories this was easier to a certain degree. When crowds got sick of a certain wrestler the bookers could just wind him up on his run and move him on to another promotion that said booker was on good terms with. On the way out, the superstar in question could also put over all of the guys in his original promotion so that they would be in a better position going forward. It was simple, but more often than not it worked perfectly fine.

As time went on though, the territories got fewer and so the notion of going just from one company to the next became more and more difficult. Add to that the fact that in the old days territories were actually more or less territorial unlike the global reach of the WWE and there is no doubt that superstars want to be more careful of looking after their reputations both in and out of the ring.

When this is coupled with companies attempting to get big name talent in order to compete with the WWE, soon two words will be raised that will give every booker nightmares.

In the latter half of 2013 there were rumours coming out of TNA that Hulk Hogan was becoming increasingly unhappy with TNA- particularly after his daughter Brooke departed from the company. His role as General Manager of TNA took up a lot of TV time but actually did not really put over angles that well.

At the same time as this was happening, TNA was in cost-cutting mode. This was a dramatic contrast from four years ago when they spent big to get Eric Bischoff and Hulk Hogan over to their side to the fence to a policy which could be pretty much summed up as thus: 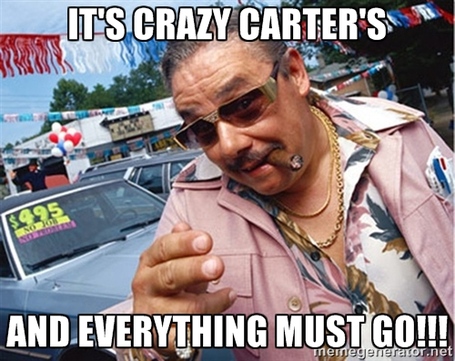 Along with this was ever-present spectre of a WWE that was going to celebrate the 30th Anniversary of Wrestlemania- an event that Hogan was instrumental in helping to get off the ground and TNA must have been a little worried when they went to the negotiating table.

When Hogan was in WCW, he was incredibly adept at telling the company that the WWE was fishing for him to come back in order to get a bigger paycheck from WCW. This was a great tactic during the Monday Night Wars because WCW and Bischoff in particular believed that the nWo was the central pillar in why WCW was winning the Monday Night War. Lose Hogan and that would have all gone down the toilet. Secondly, with the two companies neck and neck, it must have seemed folly to WCW to give WWE their golden goose back.

But TNA was not a company backed by a multi-billion dollar corporation. Nor was it a a true competitor for WWE- who was the undisputed #1 wrestling promotion. Finally, Hulk Hogan in 1996 was a guy who could still wrestle (a bit at least) but fast forward to almost 20 years later and there was no way that WWE was going to entrust them with the no. 1 spot.

Still, Hogan was going to TNA wanting a raise for his next contract.

This time TNA wouldn't budge though and so Hogan needed to be written off TNA TV somehow tastefully and cleverly so to not tarnish TNA and perhaps even get them more over.

But then that pesky Creative Control clause was raised. 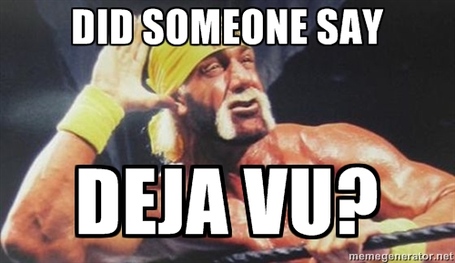 So what we got instead was got another tacked on layer to a pretty awful angle already.

In 2013 AJ Styles was revamped once again. Since the chivalrous John Cena-like face of TNA did not work, TNA decided to reposition Styles as a bearded, rebellious babyface that raged against the machine. Kinda like this guy:

Well, if you removed the mic work and charisma of a rebellious babyface that is...

Dixie Carter took a dim view to this and tried to make AJ Styles' life a living hell but fortunately Styles had a friend in Hulk Hogan- friend of the working man. This infuriated Carter who tore up Styles' contract in yet another example of why too many GMs spoil the broth and gave Hogan an ultimatum- turn up next week on Impact! and join Team Dixie or face the consequences (which weren't exactly clear...).

So the next week on Impact! Carter came out and cut a fairly average promo before introducing Hulk Hogan and complimenting on the watch that he was wearing (a gift from Carter, apparently). She then asked him if he was ready to "take a ride on the Dixie Train" (I'll leave you all to take from that what you will) and then said, with her help his career could reach a whole new level.

Hogan took all this in and then in an apparent great moment of principle said that he quit the company- leaving Dixie pleading with him to stay, including hugging his leg in order to try and stop him walk up the ramp.

So, rather than extol the virtues of Styles to Carter, Hogan decided to just walk out?! How does that help put Styles over. Stone Cold did more to put Punk over when Punk wore a Stone Cold t-shirt when he dropped his Pipe Bomb. Likewise, how does this help TNA to put their angles over now that Hogan was gone? In fact, if you were going to put forward that grand total of what was accomplished by this it would simply be that Hogan left. It would be like the Undertaker losing the Streak by forfeit.

And that's the crux of the problem with creative control: Dixie Carter's baby was TNA whereas Hulk Hogan's was his character and his reputation. When TNA was flying both were easy to manage- as was Hogan and WCW when they worked together. But when push came to shove and Hogan's views on what was right for his character differed from TNA's view of the right way to utilise his talents this is what occurred. Nobody benefited (except from the departing Hogan who promptly became the host of the best Wrestlemania in 10 years) and there was no real reason to tune in the next week.

Even in leaving the company therefore Hogan managed to dominate the angles of TNA- so much so that he was tacked on to an angle that wasn't even written for him in the first place. While he wasn't the sole reason why it failed, the fact that he walked out of a company without giving them anything to work with did nothing for Styles, Carter or the rest of the locker room.

That's Article 30! Next time I shall embark on the beginning on a multi-part saga. What's it about? Put it this way, it was one of the greatest missed opportunities in the history of the business.