If only Hank Aaron could have understood this Southern gentleman. I mean poor Bill's made a real effort to reach across the divide...

If you ever listen to the Ross Report (if you don't, I highly recommend that you do- makes for good listening) you will know that good ol' JR has some concerns about the way that heels are supposed to work in a world where little is 'illegal' now. His opinion is not a lone one either. Jim Cornette- one of this writer's favourite minds about the business has lamented about the lack of restraint in wrestling now as more and more bookers attempt to throw in so much brutality as possible instead of letting angles breathe- giving the audience a chance to empathise more with the superstars.

In 1992, WCW turned to a man who was of the same old school to try and turn their business around. Unfortunately what he tried did so much to upset the locker room, the fans, the board room and anyone else (just in case someone has been left out) that he probably did more to actually advance the notion of 'Extreme' wrestling than dial it back.

Bill Watts was not a newbie to the wrestling business like Vince Russo. Nor was he a whiz-kid who tried to turn the business on its head like Eric Bischoff when he came to World Championship Wrestling. Watts instead was a veteran booker who had run the very successful United Wrestling Federation in the 1980s. The idea of getting him to 'fix' WCW after the the steaming pile that Jim Herd had laid on the company may have well seemed like a no-brainer. 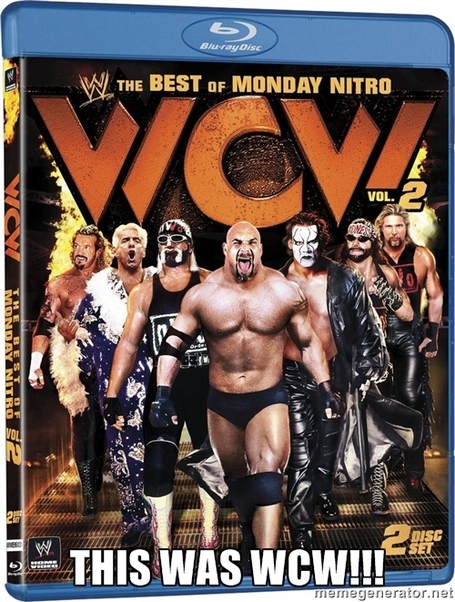 But what needs to be separated here is the difference between intention and outcome. There is no doubt Watts intended to get WCW back onto a path of profit and legitmacy after a whole lot of questionable decisions (frankly, anyone who thought that the Ding Dongs was a bad idea would have probably got on board with that).

To be fair some of his ideas were not actually terrible, in that they were ways to attempt to get legitimate heat onto heels that were struggling to get traction in feuds. Brawling outside the ring and weapons were banned in order to accentuate the fact that only the bad guys would resort to such tactics. The same could be said for keeping the barricade off-limits- implying obviously if a person was thrown into it, the person doing it would be a pretty nasty customer under the circumstances.

Then Watts brought in some other rules that were...decidedly...less successful.

The first big thing he did was to ban top rope wrestling- making it an automatic DQ. Watts justified this curiously in the Rise and Fall of WCW by saying that "all it did was you had to do something...psychologically, that was against the rules".

All very well, but if we were to continue on Bill's goal of getting heat for heels, who is actually at more risk during a high flying manoeuvre? The guy doing the manoeuvre or the guy on the mat lying down? When a guy hits another guy with a chair its a heel manoeuvre because it's not fair but when a guy does a moonsault from the top rope and then lands on his opponent how has he acted unjustly? The fans didn't swallow Watts' Bizarro logic and roundly booed when a guy was DQed for doing a manoeuvre from the top rope. As far as they were concerned, that was the sort of thing they wanted to see more of but Watts and WCW were taking it away from them. Furthermore, this lack of top rope shenanigans basically killed the light heavyweight division stone dead (some would say that Watts didn't give a shit about this being from the old-school) and made wrestling infinitely more dull for the fans.

But as pissed off as the fans were about these new implementations the locker soon got a massive cold bucket of water tossed over them as they found themselves become subject to the wrath of Bill Watts.

Firstly, in order to prove that WCW was the toughest wrestling caper around, Watts removed all the protective mats around the ring. So when a wrestler hit the floor outside the ring they would be hitting concrete rather than something softer (and safer). Watts took a liking to wrestlers he saw were willing to put their body on the line because they were passionate for the business- such as Steve Williams and Mick Foley, who was then wrestling as Cactus Jack. 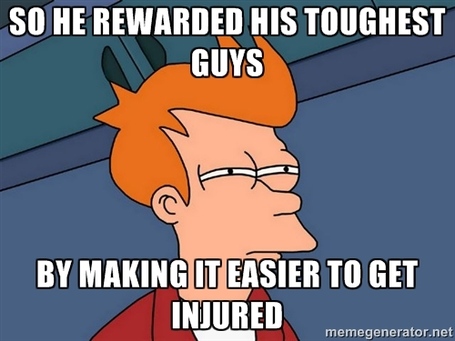 Furthermore, Watts was of the mind that kayfabe should be religiously adhered to. To this end, heels and faces could not eat in the same restaurants, nor could they stay in the same hotels or ride in the same cars. This wreaked havoc with wrestling schedules as well basically giving the middle finger to the idea the maybe wrestlers would like to hang out with their friends who were on the other side of the heel/face fence during their down time. Furthermore, wrestlers could not bring their family to TV tapings, as the notion of a heel being a doting father was one that needed to be avoided at all costs.

However it was the notion that the wrestlers had to stay until the final bell of the final match that really annoyed wrestlers. Put this together with the fact that wrestlers couldn't even play cards while they waited for the rest of the matches to play out after they had done their bit for the evening and you could imagine that there was a little bit of concern from the back.

All of this wouldn't have mattered as much if the locker room felt that they were being compensated for these changes but Watts instead slashed contracts left and right to attempt and stem what he saw was a company haemorrhaging cash. This would be compunded by the fact that he gave his son Eric Watts a major push despite the fact that he wasn't ready- a fact that wasn't lost on the crowd or the locker room. The locker room booed Eric Watts because they saw him getting a upper card position that could have gone to a familiar and/or more talented hand while the locker was simply pissed at the seeming hypocrisy of Watts instilling order on one hand and rampant nepotism on the other.

The great irony of all this is that despite all these changes it was actually something he did before he got to WCW which really put the nail in his coffin. I won't quote what Watts had said because they are easy enough to find and they are fairly offensive, but essentially he said that if he owned a fast food business he should have the right not to serve African Americans as it is his business. Nor should he have to hire a homosexual if he does not want to (though Watts used far more colourful language to describe 'homosexual'). Said interview managed to make its way into the notice of Turner Executive and Baseball champ Hank Aaron who took a rather dim view to what seemed like a head of one of the big programs on the Turner network advocating the reasoning behind segregation and profiling. What occured next was not clear- either Watts was fired or jumped before he was pushed but suffice to say he was out.

Bill Watts is correct when he says that he managed to start to turn the ratings around during his tenure in WCW, but this was not due to any of his new 'rules'. Instead it was due to Ric Flair. Even when Flair was over in WWE tearing the house down he was WCW's biggest asset in late 1992. So much so that Watts began airing classic Flair matches with the likes of Terry Funk and Ricky Steamboat. In essence the most popular matches each week on TV were old matches starring a guy who was now working for the competition!

Watts' reign at the top of the WCW tree did immense damage to the way people viewed wrestling. Instead of trying to make it seem cutting edge, Watts innovations made it seem antiquated and out of date. One of the people that would get on Watts' wrong side would be Paul E. Dangerously- better known as Paul Heyman who would soon book and run a business known as ECW, In essence, it was the Newtonian reaction to Watts' action- pushing stories and violence further than had been experience before by the wrestling industry because Watts and similar bookers in Heyman's mind were simply losing that emotional connection to the audience.

ECW may have been symptomatic of many of the ills in today's wrestling world but think about this- did Cactus Jack really take off with great promos and a compelling character in Watts' WCW or Heyman's ECW? What about Steve Austin? Watts was a stubborn old dinosaur- and his way of thinking was becoming extinct.

And that's article 26. Next time I'd like to do something a little different. We've all heard about the recent ups and downs about TNA and I've only done 2 editions throughout this series regarding Ms Carter's little franchise so I invite you, the reader to post me of the next disaster I should do. The only condition is that it has to do with TNA! Let me know!