Ok, this is going to be a little controversial. Anyway, I've warned you.

In the middle of 2013, CM Punk was the WWE Champion and as far as many were concerned was flying high. He had just come off a brilliant feud with Daniel Bryan and many were looking forward to see what would happen next.

And then the Rock came along on the 1000th episode of Raw.

Now, this was to be expected- the Rock was a massive star and the 1000th episode of Raw was something to be celebrated. So many were looking forward to exactly what the Rock would say- keeping in mind that the Rock had said the day after Wrestlemania that he wanted to be WWE Champion.

So the Rock marched into the rind and announced on the 1000th episode of Raw that he was getting a title shot at the Royal Rumble. While many were excited with the prospect of a CM Punk/Rock match, there was a nagging feeling that we all knew that it was heading towards a Rock/Cena feud at Wrestlemania 29.

Still, with all the pressure building up to it...I am going to stick my neck out and say I actually enjoyed the Punk/Rock Royal Rumble match. As far as a pure wrestling match it isn't amazing. But it does tell a pretty smart story. Rock sells his stomach injuries like a champ and Punk targets them in a smart fashion before Punk tweaks a knee and Rock begins to target that. It sounds simple but it makes for a more intriguing contest that just a Superman hitting one AA and then covering. There's also some quite nice counter spots during the match (there's one that goes from a Rock Bottom to a GTS to a Sharpshooter to a Roll-up transitioned into an Anaconda Vice- not perfectly done but it's pretty cool none the less). Oh, and I think Rock's DDT is still really cool.

This is helped by some surprisingly good commentary- particularly from JBL who is on really good form here- being more like a expert commentator than a heel commentator and adding a real big fight feel to proceedings. If I was Vince, this is what I would want more out of JBL- particularly in the big matches as it is something that he can pull off really well as a former WWE Champion. It's better than this... 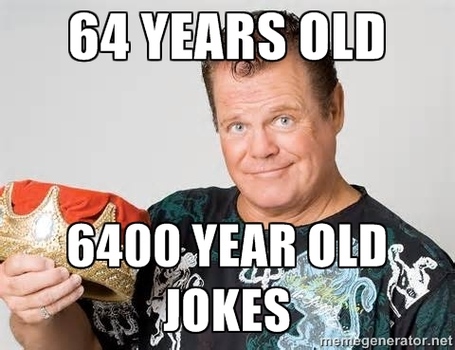 So, yes the Rock gets gassed near the end (though I think some of it is actually acting on his part) and yes the ending is a totally overbooked clusterfuck that should never have taken place but overall when watching this match again recently I really did enjoy it.

Oh, wait- we're talking about their Elimination Chamber Match? Oh what a pisser that was...

My esteemed colleague GrecoRomanGuy has talked about how CM Punk was a fantastic heel, but that he has a penchant for cutting close to the bone with the truth. This feud was no different. CM Punk was the guy who had busted his butt for 434 days as champion, had come back from a torn meniscus early to fufil his duties as champion to work with one of the stiffer and greener workers in Ryback on the roster in a TLC match. He then moved on to a part-time worker who was more known for his acting than his wrestling at 2013 and lost because apparently the Shield turned up when the lights were all blacked out and there was no evidence of it occurring (at least to most people watching on TV).

If I was him I'd feel pretty damned peeved too.

Now, in the Royal Rumble it didn't really matter that Punk was the heel- the announcers, the wrestlers and the production were more interested as promoting the match as a big fight feel rather than a conventional heel vs face feud. The Elimination Chamber match? Not so much...

Paul Heyman has somehow got Vince McMahon to agree on the stipulation that if Rock was DQed he would lose the title (why would remain one of those great mysteries of the WWE, but anyway...). Now when Chris Jericho did this against CM Punk at Wrestlemania 28, he subjected CM Punk to weeks of psychological abuse. Christian during the 2011 Money In the Bank match against Randy Orton spat in Orton's face in the heat of the moment- causing Orton to react instinctively.

How does Punk do it? He slaps Rock in the face and waits until Rock suffers from Babyface Stupidity Syndrome, where he wails on him non stop-despite hearing only minutes earlier that he cannot get DQ'ed!!!

So then we have Rock apparently going through a phase where, according to JBL "the title means so much to him that he doesn't want to do anything to risk losing the title (i.e. get DQ'ed). But by not trying to not lose it you can lose it".

It must be said that the announcing is nowhere near as good on this match as they were during the RR match...

The trouble with all of this is that it is so obvious as storytelling and makes for very dull wrestling. I guess they were concerned about the Rock's cardio but the RR match was cool! It had two guys giving their all. This match had few counters and a LOT of headlocks to slow the pace down (where JBL and Lawler can argue about Paul Heyman rather than call the friggin' match!!! Sorry, breathe...).

It was like the way the agents thought the best way to get around the issue of the Rock's cardio would be to make it bleeding obvious to everyone that he needed plenty of rest holds to get through the match.

And if you are talking about overbooked finishes...at least the RR match had one overbooked finish rather than two or three. There's referees being knocked out. An 18 count pin for Punk with no official (seriously, why is there not a reserve official around in matches? It seems pretty obvious). The reserve referee hilariously rolling his ankle (he obviously had been watching the Italian Soccer Team for pointers) and the title belt being involved before finally a Rock Bottom and a 1, 2, 3 later.

Which begs the question- how is any of this supposed to make Rock look like a strong champion? Or indeed a legit champion? Particularly when he was off during weeks of the Road to Wrestlemania. What it did was make Rock look like a guy who was too over the hill to wrestle any more and who won because of luck rather than guts and determination.

Ironically, at Wrestlemania 29 CM Punk would tear the house down with someone who was almost a decade older in the Undertaker. Why? Because, unlike in this match, the WWE trusted both competitors to tell a story, their ring work was really good and they didn't try to tell the bleeding obvious. Instead, they wrestled a great match and let the audience cheer who they wanted to- the IWC darling or the locker room leader. You couldn't lose.

I actually think therefore that this match is more Creative's fault that Rock's or Punk's. After the fun, big fight feel of their RR encounter it seems such a bizarre change of pace that seems to be brought on by a group of people that seems afraid that Punk is not coming across as a bad guy. The way they then go about it so ham-fisted that it only seems to re-emphasise that CM Punk's hand was being forced to be the third wheel in an equation that led merely to Rock and Cena. This in turn of course hurt the Rock as it became perfectly obvious to much of the audience that he was being wrapped in cotton wool- both in terms of his ring work as well as his positioning as a character which made the audience resist him. They wanted the Attitude Era Rock, who didn't need awful Rock concerts or sycophantic Jerry Lawlers to get over. The WWE wouldn't let him breathe and just be the Rock. Instead they had to fawn over him because they thought if Jerry Lawler did, then the crowd would too.

Some may think that it's a bit harsh to put this on a list alongside the Fingerpoke of Doom and other such fiascos and they'd be right. However, this was the feud that a lot in the IWC were looking forward to. We didn't really want to see Cena vs Rock (particularly again) and since we couldn't see Stone Cold vs Punk, Punk vs Rock seemed like a pretty good alternative- the Voice of the Voiceless vs the People's Champion. However much you make Punk the heel, the Pipe Bomb of less than two years ago will always ensure he has a place in people's hearts- particularly since the other guy is him 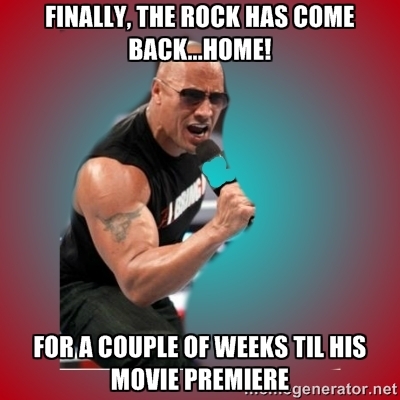 Seriously, some people will always be a bit peeved.

That was something that the WWE could never understand- much to their own detriment.

That's article 25 people. Feel free to debate this one with me- I won't be surprised if it causes some controversy. Next time we look at a booker who wanted to take the late 1980s WCW product into the future...by taking it back to the 1950s. See you then!