Where Mr Hogan does his level best to kick the ladder over that he's still standing on top of...

Many complain of John Cena in the WWE- myself included. They complain that his character is too stale, that he doesn't sell as well as he should, that his promos are often lame, etc., etc. However, I wonder if Vince has always been stood by John Cena for the most part mainly because John Cena it seems is an incredibly dependable performer. Sure, he's not the most talented performer on the roster- but let's face it, the faces of the company they had before either left abruptly (Brock Lesnar) or were injury prone ('Stone Cold' Steve Austin). Cena, until a couple of years ago was hardly the latter and he's never been the former.

And then there's this guy. 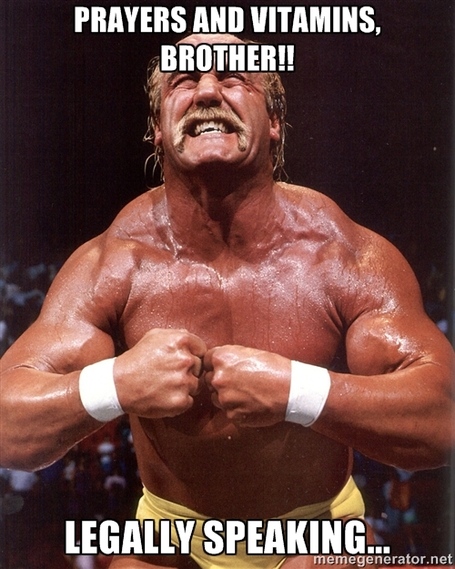 In 1994, Hulk Hogan moved from the hallowed halls of the WWE, which he helped to build to a national empire to WCW, While Vince McMcMahon may have been aggrieved to know that the former face of his company was now over helping Eric Bischoff making WCW viable competition, I wonder if a small part of him would have been thankful that he no longer had to deal with trying to placate Hogan at the expense of some of the best rising talent in the wrestling world.

As every wrestling fan knows, in 1996 Hogan managed to re-invent himself as a badass heel as the head of the New World Order- a move that manage to help WCW conquer the ratings as well as keep Hogan on top of the food chain for a little while longer.

By 1999, however, Hogan was in a similar situation in WCW to what he was in in WWE in 1993. He could feel that rising superstars were getting over and his position at the top was becoming less and less tenable. Now, when Hogan was in the WWE, McMahon could keep a lid on his...egotistical tendencies because whatever Vince's faults it has to be said that he runs a tight ship. Furthermore, though Hogan may have been irritated by the way Vince's mind may have been working about putting over guys like Bret Hart and Shawn Michaels in 1993, he would have known that WWE was the undisputed leader of American wrestling.

Unfortunately, in 1999, neither was really the case. The ratings bump that WCW had got from the nWo had all but subsided and they were now flagging behind the WWE in the ratings war.

Add to that the fact WCW at this point seemed to believe in this point in the following business model: 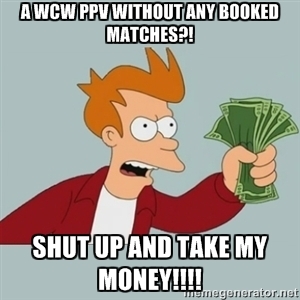 Cause y'see, WCW was a basket case in the terms of an organisation- changing plans at the last minute all the time and making it incredibly difficult for the crowd to invest in angles- when they didn't really invest in many of the angles themselves.

At this time, Hogan was out rehabbing a knee in time for the Road Wild PPV (which I talked about a couple of articles ago) and had an interview on the Mancow Morning Show at Tampa. Now faced with the prospect with being a tired face of a company that was free falling Hogan decided that he needed to distance himself from all the mistakes that he saw WCW were making, portraying himself as the saviour once again.

And so came one of the best notions of a 'scorched earth' interview in the history of pro wrestling.

Firstly Hogan addressed the notion that perhaps there were stars in the midcard that weren't getting their proper due- a common gripe about where WCW went wrong today. Hogan, as tactful as always claimed that he was sick and tired of "Malenko and the rest of the midgets"- a charming term given to the smaller MORE ABLE wrestlers of the midcard by such technical wizards like 6-move Kevin Nash (thanks Jim Cornette)- complaining about their roles. Their roles according to Hogan was to make guys like Hogan look good and to not get over under any circumstance, because should they do so then they were soon buried quicker than a mob hit.

This in itself would be enough one would think to antagonise much of the locker room. After all, it's not often that the face of the company goes out in public and just pisses on what many would consider that future of the franchise, but Hogan clearly thought that people like Dean Malenko, Chris Jericho, Chris Benoit and others simply did not have what it took to be superstars.

Somewhat breathtakingly, in the same interview then, Hogan took a huge dump on the one WCW superstar that the company had truly made into a main event player over the past few years in Bill Goldberg, claiming that anyone could win 20 000 matches in a row and therefore become a hit.

1) Hulk Hogan got to be a main event player by being wrapped in cotton wool and smashed over in the WWE just like...hmmm...now don't tell me... Bill Goldberg. To turn around and say that Goldberg got over in large part because he won would probably have made many in the WCW locker room cock an eyebrow.

2) Claiming that Malenko and them should not complain about their roles when they get buried with losses when they're getting popular and then say that it's actually not that hard to make new talent really is another slap in the face to a lot of guys who busted their guts out a hell of a lot more than some guys in black and white shirts coming out to porno music. Hogan got popular with the help of the establishment. These cruiserweights had to become popular in spite of 'help' from the establishment. What was the point of looking forward to the future when Hogan seemed intent that they would not have one?

Ironically, around the same time as this, WCW was frantically trying to hold onto one of the cruiserweights. Perhaps you've heard of him, he's called Chris Jericho.

Now it's unknown whether Jericho would have stayed in any case (he has said in interviews that he more or less made up his mind about a year out that he was leaving) but this eloquent passage from Hogan surely would not have helped things.

The Mancow interview therefore showed the difference between the WCW locker room and the WWE locker rooms. The WWE locker rooms in 1999, perhaps because all of them were not big stars before 1995 (you could make a case for the Undertaker, but he was never the guy) was a collective group of wrestlers who the Monday Night Wars had helped to galvanise into a group fighting for the one cause. WCW on the other hand had a whole bunch of guys seemingly eating each other alive.

It also showed people about the danger of investing so much power in one superstar and allowing him creative control. John Cena may have some creative control, as does Triple H and I would imagine Undertaker, but no superstar in the WWE I would wager had the same amount of leverage as Hogan did in WCW. Had they made new stars out of the 'midgets' maybe this would have changed, but Hogan's interview showed just how much the company regarded its best technical wrestlers.

That's article 24! Next time we look at a second match in a feud that tries to compensate for one flaw in the previous PPV by throwing a whole bunch of other ones! See you then.