Remember the way the crowd always liked the Fonz coming into the scenes and bashing the jukebox? And giving advice to the naive Richie Cunningham?

What if the Fonz stole Richie's girl, then verbally humiliated her in front of thousands of people, then basically left Richie to the tender mercies of the school bully after the Fonz had riled him up without so much as an apology or some comforting words to help pick him back up? What would you get then?

You'd get the WWE,

It's hard to believe if you listened to Michael Cole now that couple of years now Vince's attitude to YouTube was a little retrogressive at best. Now it seems the WWE cannot go five minutes without hurling some app, hashtag or whatever down our throats but in 2011 the WWE were still a little behind when it came to such things.

At the same time as this was occurring, Zack Ryder was in the middle of a lull in his career. Stuck with next to nothing to do on television, Zack Ryder decided to appeal straight to the audience and cut out the middle man of the creative team by launching a You Tube show Z! True Long Island Story in February 2011. The fans began following the series and more and more Ryder chants were heard on television- compelling the WWE to push the superstar. In fact, at TLC Ryder managed to win the Untied States Championship off Dolph Ziggler- a fitting prize for someone who took his destiny into his own hands when the company would not.

You will notice, however, that the title of this feud does not have Zack Ryder in it. That is because he was merely sucked into the shit vortex that was this feud in order to give John Cena something to do before he faced the Rock at Wrestlemania 28.

But what about what the crowd getting behind Zack? 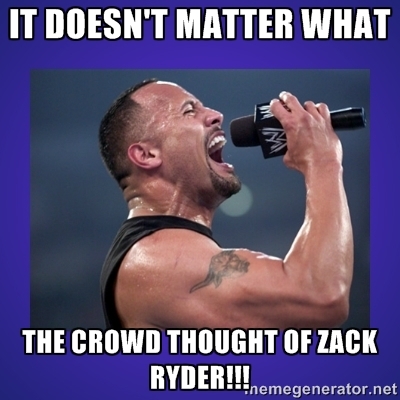 So anyway, in early 2012, Zack Ryder had the WWE United States Championship and seemed to be settling into a nice midcard role for the company. At the same time, Kane had just returned from a lengthy hiatus- masked once again and targeting John Cena in order to try and make him 'Embrace the Hate' rather than 'Rise Above Hate' like his T-Shirt claimed (not many feuds have ever taken place because a superstar is disgusted with another's threads but the WWE didn't let that deter them).

So where does Zack Ryder fit in you may ask? Well, the creative team decided that for Cena to feel that this feud was devastatingly terrifying that someone had to get the tar beaten out of them by Kane. Again and again.

And that person was Ryder.

So soon Ryder was finding his push coming to a screeching halt. He was defeated for the United States Championship after Kane injured his ribs just before his match with Jack Swagger in mid January on Raw. That's right, not even on PPV but on Raw. Following this, Kane chokeslammed him through the stage the next week resulting in Ryder being put in a wheelchair.

And then we got to the first match- Cena vs Kane at the Royal Rumble.

The match isn't horrible. It's just very...dull. It's your typical Cena vs Monster Heel match, where Cena tries to mount offense every now and then only to be stopped by a massive right hand/ boot/ clothesline/ side slam/ something else by the heel. In between is a lot of Cena slumped on the floor looking out of it. Looking at this match it becomes immediately apparent why a lot of people are more bereaved of Cena matches with big guys. There's no real areas being worked over by Cena- no real plan of how he might beat the big guy.

Mind you, the announce team don't help. JR, Joey Styles or Tazz may have talked about wrestling technique. Michael Cole seems to be more willing to talk about John Laurinitis, Jerry Lawler is making bad jokes about how Johnny Ace is horrible (apparently Johnny Ace is bad because he gave him a cup of coffee even though he knows Lawler hates coffee. Most would say that this was a mistake rather than a Machiavellian plot on Laurinitis' part and therefore gains no heat and only serves to make Lawler a paranoid egomaniac).

And that's not even going into the beautiful cliches of Booker T which, while hilarious, are not exactly, conducive to smart announcing.

But the end of the first match was essentially a double count out, with Kane walking out having Tombstoned Ryder (yes, he got him again) and chokeslamming Cena. So it seemed that a rematch was on the cards at Elimination Chamber. Well, maybe now they could at least keep Ryder out of it. Surely he had been through enough.

See, Ryder had a girlfriend known as Eve Torres. It was quite a nice way to get her on TV and it was a nice odd relationship between the glamorous girl and the slightly trying too hard superstar. But when Kane continued to wail on Ryder, Eve was always there, pleading with Kane to stop and putting herself in harm's way.

Which made the next part of this feud all the more weird.

On Valentine's Day (naturally, because the WWE are nothing if not a subtle bunch) Cena rescued Eve from being abducted in an Ambulance (cause the next PPV match between Cena and Kane was in an Ambulance y'see?). Eve, being somewhat overly gracious kissed John Cena on the lips in which Cena clearly kisses back. Unfortunately Ryder stumbles in on both of them and feels betrayed naturally.

There will be more on this later in the article, but suffice to say Ryder was subsequently written off TV soon after when Kane pushed his wheelchair off the stage.

This led into the second match and final match of the card- where Kane promised (hilarously) that he would keep Cena out of a wrestling ring "until Wrestlemania". Such is the problems with announcing your Wrstlemania main event a year beforehand- your February PPV match loses all meaning shiuld it contain.

So why the fuck would you make it the main event?!

Michael Cole said early in the match that this was only the second Ambulance Match in history because it was so dangerous. Uh huh. There had been 20-odd Hell in a Cell matches up to 2011 where guys have been tossed off the top of the cage. Don't get me wrong, an ambulance match can have some pretty big bumps, but everyone knows why there's not many.

Firstly, a lot of the match is going to be up one tiny part of the arena rather than the centre, which is after all where the seating is sorta suited to. This means the wrestlers have to keep going up and down, back and forth from the Ambulance back to the ring so that people can see what the hell is going on. However, this also makes for poor storytelling as wrestlers have to take a lot of time essentially walking up and down the entrance ramp- not to mention the fact that one questions why you would move away from the ambulance you are trying to stuff your opponent into.

The parts in between these treks to ring and back are actually not that bad with some nice little spots. The problem is that the pace of the match is just really broken up by the fact that they keep on having to actually move around and separate from each other in order to try and get back to the ring or to the ambulance.

Oh and once again the commentary is awful- though if I'm honest it's really just Lawler's fault on this occasion, who seems to have become John Cena's version of Chris Crocker, claiming at one point that he'd like to see all the people that shout "Cena Sucks" lifting the sort of weights that John Cena does (I'd personally like to see Jerry Lawler stop ogling on live TV, but it seems that ain't gonna happen either).

And that would be the end of the feud, really...except it wasn't.

See apparently, someone in the creative side of things (I'm guessing his name rhymed with Bevan Rum) decided that John Cena needed to be absolved for what he did with Eve- after all, he did actually kiss his friend's girlfriend. So Eve suddenly became a heel character the Raw after Elimination Chamber- you know, the same Eve that had always been pleading with the 7 foot psychopath to leave Ryder alone at great risk to her own safety?

She claimed that she had used Ryder to get TV time (one could argue that this may have been a sly dig at Ryder, who used his You Tube channel to get TV time rather than the orthodox methods). Likewise Eve claimed that she was using John Cena in order to gain more prominence in the company. Unfortunately Cena stumbled on her planning and found out her schemes.

Which led to one of the most uncomfortable promos in all of the last 5 years of WWE.

The sad thing is that when Ryder came back, Eve seduced him once again, before turning on him at Wrestlemania, showing that the whole 'hoeski' promo was just to allow Cena to wash his hands of the whole Ryder thing before moving onto the Rock. Ryder? He never got near the dizzying heights of being Cena's buddy again.

This feud showed the WWE the pitfalls of having a year long build up to the main event. Everybody knew who the two contestants would be and so whatever Cena did in January or Febraury was always going to be a little dead. Unfortunately the way that they spiced it up would massively hurt one talent's career who could have been a great asset in the midcard.

And that's article 22! Next time a Mr Bollea is on the air to complain about midgets and a guy called Bill. Hope to see you there!