Where we strap onto our metal steeds and ride to a WCW PPV! If we can read the map of course...

To be fair, Goldberg thought it was "brilliant"...

But then, Goldberg was a big fan of motorcycles. So was Bischoff, who ran the show back when he coined the idea of twinning a WCW PPV with the Sturgis Motorcycle Rally. To many who were familiar with the basics of the wrestling business there was an glaringly obvious flaw that Bischoff had decided to overlook: 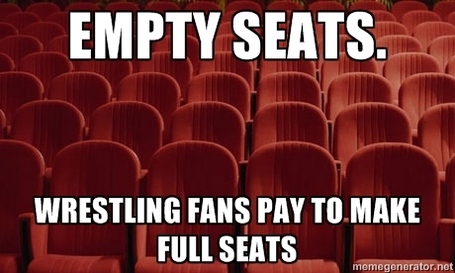 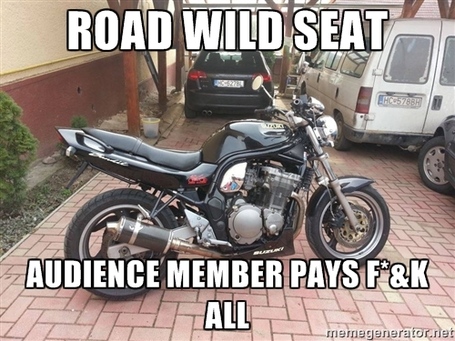 But while WCW was running hot, Road Wild was an expense the company could afford. Nobody really questioned the ludicrousness of the notion because when WCW was running hot, nobody really questioned anything. However, Road Wild 1999 showed how much money WCW was flushing down the toilet at a time when it couldn't be affording to flush any down. And for what?

A clusterfuck of immense proportions.

For once, it wasn't a big thing, just a lot of little things that altogether made for a horrible PPV both in front of the cameras and behind.

Firstly, the WCW PPV was preceded by the motorcycle run to Sturgis- an event that WCW superstars were involved in and subsequently therefore proceeded to make trouble.

Jason Hervey and Dustin Runnels both crashed their bikes, but fortunately neither was needed for the upcoming PPV. Two who were needed however were Bill Goldberg and Rick Steiner who were actually taking on each other in the midcard of the PPV.

Did they crash their bikes? Nope. They just got lost.

It would seem like a joke in any other company. Two of the biggest stars (ok, that may be a little generous for Steiner) of the company almost do not turn up to a PPV because they got lost in the middle of an annual motorcycle ride. In fact, they got so lost that apparently there was concern at one point that the two were killed in a motor accident.

It only got worse at the PPV itself, with Buff Bagwell and Ernest Miller getting into a fight about how the match between the two of them would end. Such tension between locker room comrades would at one time have been easily swept aside during WCW's run as the top dog of the wrestling world. Now it was anything but and every problem like this added more tension to locker room morale and to Bischoff's stress levels as WCW became a worse place to work for.

This was borne out by another bust-up that was had during that night. To examine this, though we need to go back a bit.

Throughout wrestling history, people have talked about a wrestler being '#1a'. What this means, essentially is that they could be the most popular, the best wrestler, the best talker, but as far as the company is concerned, they are below #1. CM Punk is a perfect example of this- spending a good deal of his later career being #1a to John Cena.

Around the late 80s in the WWE, that man was 'Macho Man' Randy Savage.

There was no doubt in many people's mind that between him and Hogan, Savage was the better wrestler, the better talker, the better technician. Had it come down to those elements CM Punk would have usurped Cena too.

Thus when Hogan upped ship to WCW it would seem like the perfect time to let Savage move the brand forward...if he wasn't stuck on the announcing table.

By 1999, Randy Savage had been caught up in the byplay and politics of the WCW locker room that Hogan had done his level best to foster. Combined with the, erm, supplements that Savage was obviously taking to enhance his physique to massive proportions and he wasn't the concilitory guy that helped Hogan with one of his most compelling storylines in WWE history. Whereas in 1989 he was a stickler for details, in 1999 he was a paranoid superstar- with suspicions fuelled by years of politics and backstabbing chicanery.

At Road Wild then Savage went nuts at Hogan, accusing him of politicking to keep Savage in the midcard while guys like Sid Vicious got the more juicy upper card spots. Admittedly there was some credit to this- with Savage having won the title at the last PPV- only for Hogan to come the next night on Nitro and win it back straight away. Furthermore, while Hogan faced Kevin Nash for the title (in a match that was slow and dull) and Sid Vicious got over Sting (ditto), Savage would face Dennis Rodman in a match that (and I'm not kidding) he got thrown in a porta potty.

The aftermath of Road Wild saw Savage walk out on WCW and no-show several shows. Eventually he came back later on during the year. However the stress of such a fiasco behind the scenes had taken its toll on Bischoff who went on a rampage. He was out for blood and screamed at Raven, Rey Mysterio and others- claiming that they had set a bad example for the company (Raven had said some disparaging remarks about WCW in public and Mysterio had made gay references on TV).

Was Savage reprimanded for being unprofessional enough to not turn up? Nope. It was this rank hypocrisy of Bischoff that led Raven to take him up on his offer to walk out the door if he didn't like the place. Mysterio also was heading out the door, but Bischoff enforced his contractual obligations. All of a sudden some of the people in the mid card weren't caring about the money anymore. They were caring about the fact that they were not being respected as wrestlers and performers.

Historically, this would also be the last Road Wild. An event that had many cock-ups (more in later articles!), this finally proved to the WCW brass that it was logistically too much for the company to organise and perform. While Bischoff and Goldberg may have thought the idea was great, in an age where they were trying to make wrestling more mainstream, was it really that smart to be seen with a lot of bikers in a small Dakotan town? One thing the WWE have always been clever to do is to try and encompass as many demographics as possible. Road WIld seem to be doing the opposite.

Finally, Road Wild also was a big chapter in one of the biggest love/hate relationships in all of pro wrestling. Whether a more united Savage/Hogan team would have saved WCW is unlikely, but the bitterness between the two men was sad legacy of this PPV.

That's article 22. Next time we get a certain superstar to Embrace the Lower Midcard. See you then!