Those who are a regular follower of these series of articles may believe that I have a pretty dim view of Eric Bischoff's booking a lot of the time. A good summary out of all of my articles about Bischoff and his disasters so far can be summed up thus: 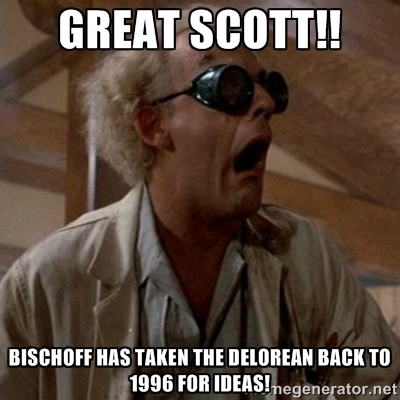 And many of you will put the Fingerpoke of Doom or Immortal as worse mistakes for Bischoff than this- which, at least on a surface level seemed to be more an issue of Jeff Hardy's issues with substance abuse rather than bad booking. However, this article will not delve into the various issues about Hardy's demons- as a man who has lost a close relative far too soon to drugs it is far from my place to judge about the temptations that it can bring. Likewise were that in particular the issue, I doubt I would have considered it for this list.

The reason it makes the list is for the way that Bischoff handled the situation, and how his decisions cost the company money, embarrassed one performer who should not have been out in the ring, put another at risk while killing his push stone dead and making the crowd feel like they had been duped.

So why don't we take it from the beginning...

In a cryptic promo that landed the week before put up a cryptic 3.3.11 promo that had a somewhat similar feel to a certain Undertaker return promo that the WWE had shot a year earlier to usher the return of Sting (why this wouldn't be a gradual build over a few weeks is unknown, but anyway) who immediately got a shot at Jeff Hardy's title at Impact on the 3rd of March (geddit?!) and won. Hardy immediately complained- claiming he 'wasn't ready' for a title defence and so got a rematch at Victory Road on the 13th March (in WWE this would be known as a 'rematch clause' but hey- why make things simple?).

And so 10 days after Sting held the TNA World Heavyweight Championship aloft Jeff Hardy would face him in order to wrest the title back not only for him but also for his stable Immortal- which also contained Eric Bischoff and Hulk Hogan.

According to many sources, Hardy was concerning a lot of the backstage crew before the PPV before disappearing completely for a couple of hours. Not long before his match with Sting, he was discovered in a bathroom in no condition to perform- a dreaded line for any booker to hear.

There's not much to actually say about the match because well...there's not much of a match actually. Hardy comes out first walking fairly unsteadily to the ring before Sting comes out cheering to the crowd and holding his belt aloft (he looks a lot more animated than he does when he faced Hogan at Starrcade '97, though his happy features soon take a mighty quick turn for the worse).

After the ring announcer starts the pleasantries Eric Bischoff enters the ring and shakes Hardy's hand, whispering something in his ear before claiming that because Hardy was not prepared for Sting's return, Immortal, who controlled the company had added the stipulation that this would be a No DQ Match for the title, after which he got bopped by Sting.

Then, after the bell rang, Hardy spent a good minute gesturing to throw his entrance shirt to the audience, leaving Sting to just wait while he carries on like a idiot. Then Sting kicks him once, elbows him a couple of times, hits the Scorpion Death Drop and lays on top of Hardy for the three count so that Hardy can't kick out.

Tazz's commentary is hilarious, claiming that Sting "must have re-invented himself" and "he's never seen anything like this" while Jeff Hardy, having got up from the Scorpion Death Drop and therefore completely no-selling it has a tantrum in the ring, while Sting simply says "I agree" to crowd chants of "bullshit".

Ok, so you may think I am being too easy on Mr Hardy here. To be honest I actually really am not that keen on Hardy as a wrestler in the first place. As far as I am concerned he was a great daredevil superstar, but as far as storytelling, selling and ringcraft goes, he is far from excellent. Whether he deserves another chance after all his missteps is not really something that this article will delve into either. Fact is, he screwed up royally that night and let everyone in TNA down. For that he should be accountable.

In such a situation as this, when one half of your main event is in no condition to perform a couple of hours before kickoff, I believe that there are really two options on the table for a booker.

1) Tell the truth: Not the whole truth, obviously but perhaps something which is excusable as well as keeps the fans satisfied. i.e. "We regret to inform viewers that tonight's TNA main event has had to be changed due to internal discipline issues revolving around Jeff Hardy. We apologise for any inconvenience and instead give you..."

2) Set up a last minute angle: Have Hardy being beaten up and injured by the other members of Immortal, or by a mystery assailant. Have him (kayfabe) arrested. Do something. Then announce a new main event.

The object of these two options above is to get a main event that the fans would want to watch instead. Get a good up and coming wrestler to fight Sting and put him over. Not win, but give Sting a heck of a fight (I know the idea of booking for the future would seem like sacrilege to Bischoff but go with me here...). If they were a babyface, Sting would then shake his hand and TNA would have a new star.

Bischoff instead went for option 3. Essentially let the drugged out superstar into the ring and then make the match No DQ.

The first part of that is bad enough. Hardy was in no condition to perform and so letting him out there did no one any favours. But the second part is even worse. Why trust a wrestler who is in no condition to perform with chairs, tables and every other piece of equipment that's now suddenly ok in a No DQ match?! Some say it was just a way for Bischoff to eat through some time, but if that's the case then he made the crowd a hell of a lot hotter for a match that became a hell of lot more disappointing. A squash match for a title is bad enough, but a squash match for a title when chairs, tables and canes are legal and none are used?! That's horrible.

And if anyone thought that Sting deserved better, it ought to have been Bischoff, who was helped so much by the Stinger's unwavering loyalty throughout the days of WCW. Instead, Bischoff essentially passed this steaming heap of trouble to Sting in front of thousands of fans and said "you deal with it", fully knowing that it would damage him.

Victory Road 2011 was an amazingly costly disaster for TNA. In particular the 88 second main event match cost TNA tens of thousands of dollars as they offered TNAondemand for 6 months free for anyone who bought the Victory Road PPV. Crowd's felt like they had been jerked around and the whole thing screamed of a WCW fuck up- after all, the WWE would have a contingency plan for this. Furthermore, questions were asked about the way that TNA allowed such a superstar to get to the ring, let alone perform. In a time where the WWE were ruling the roost with a family orientated PG-13 show, it seemed TNA having one of its main event stars stoned out of their mind may not have sent the right message PR wise.

That's article 21 people! Next time we get lost (literally!) on the open road with fights, crashes and terrible matches thrown in for good measure. See you then!