WWE Extreme Rules results, recap, reactions from last night (May 4, 2014): In his hands

Share All sharing options for: WWE Extreme Rules results, recap, reactions from last night (May 4, 2014): In his hands

WWE returned to pay-per-view (PPV) -- WWE Network for most of us -- last night (Sun., May 4, 2014) with its Extreme Rules event at the IZOD Center in East Rutherford, New Jersey, featuring what was billed as a triple main event doubling up on disappointment.

Catch up on full results and the live blog by clicking here. Let's get right to reacting to all the night's events. 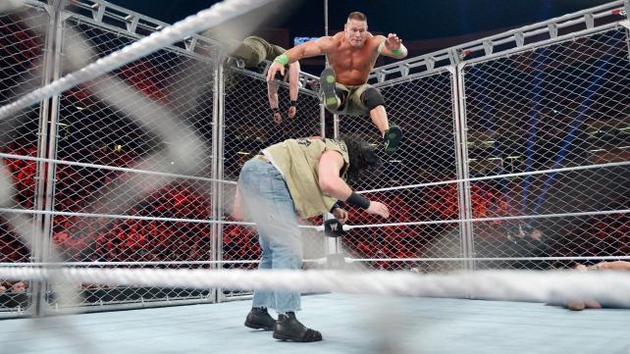 LOLCENAWINS (even when he loses)

WWE badly wants to convince you John Cena has suffered on his path to the top, that he has overcome many obstacles to achieve his great success. But this is a lie. Oh, sure, he's been placed in unfavorable positions -- like 3-on-1 handicap matches inside a steel cage (hey, it might as well have been) -- but he doesn't lose, even when he does.

Why? Because he's never really vulnerable.

At no point in his match with Bray Wyatt last night did Cena appear to be in trouble. Not once. Even when that creepy kid showed up and scared him out of his socks. Even when Sister Abigail delivered her fatal kiss. Even when they announced Wyatt the winner.

Because all of that came after Cena had all but won the match on eight different occasions. He handled three monsters with ease. He stood up at the gates of hell and not only did he not back down, he beat the ever loving shit out of the devil, cast him aside, and surveyed the destruction on his way out.

Surprise stopped him. Only that and nothing more.

He's infallible. Every time he's tested, he passes with flying colors. He's never beaten, or broken. He's hardly bruised. When all we ever needed was to see him suffer, he turned his trip into an STFU.

That's straight to your ears from his chiseled, outstretched arms.

St. Pierre won the UFC welterweight title and was on top of the world as the next great mixed martial artist. As they like to say, if you were going to build a perfect fighter, he would look like the ripped French-Canadian who tore ass through the 170-pound division and achieved his dream.

But then, in a flash, it was taken from him. An old underdog named Matt Serra came along and knocked him out. Not only did he best him physically, destroying his equilibrium, he crushed him mentally, embarrassing him in front of the world.

It was a humiliating defeat, so much so that "GSP" visited a sports psychologist after. He now had two opponents to overcome by the time they got to the rematch: the man who made him look silly in front of the world, and the demons lurking inside his own head.

Ultimately, he triumphed, winning the title back in his backyard in Montreal, Quebec, Canada. He had everything taken from him and through hard work, perseverance, and an unending belief in himself -- one he gained with some outside help -- he overcame.

WWE will try to tell you time and again that this is the story of John Cena. But he'll never be allowed to go as low as St. Pierre. It's a real shame, too, because it means he'll never get as high either.

All my heroes are broken. 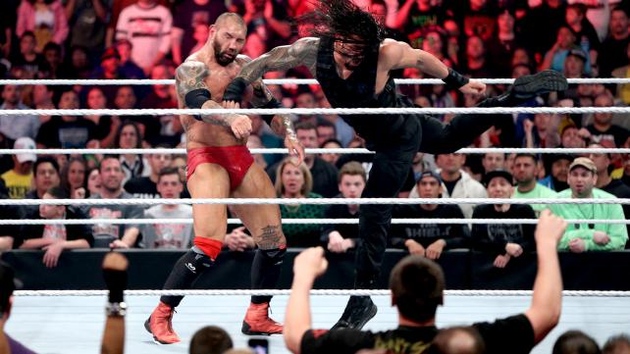 When all else fails, BELIEVE IN THE SHIELD

When Batista left WWE, he was a top heel who once went over on John Cena. Hard to believe, I know. But he was a legitimately big draw for the company, and was treated as such.

Fast forward four years and his second run with the promotion must feel like a disaster. Sure, he won the Royal Rumble, but it was about as well received as a blood transfusion with an AIDS patient. He was forced to turn heel, which means he would start doing jobs.

It wasn't supposed to be this way.

Forgetting that brief program with Alberto Del Rio, he's been made to look about as weak as possible in clean losses to Daniel Bryan and now Roman Reigns. It's no wonder the rumors are so hot and heavy that he's thinking of tucking tail and heading back to Hollywood sooner than expected.

The problem, of course, is that spot is occupied and the future is here. Like Undertaker learned last month, time catches up to us all and it's usually a ghastly monster with far more physical tools. For "The Phenom", that monster was Brock Lesnar. For "The Animal", that monster, at least last night, was Reigns, who speaks softly and carries a big stick.

And a Superman punch. And a spear. 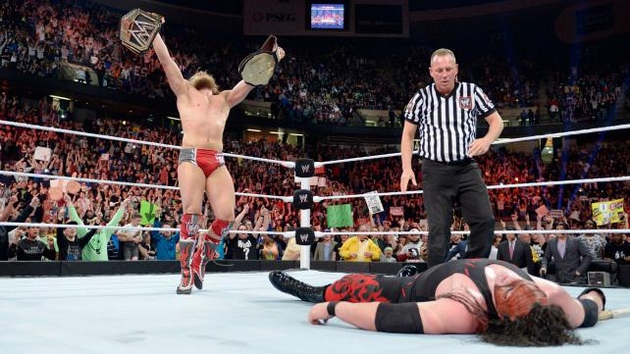 Psychology will take you a long way in professional wrestling. Hell, it's arguably the most important single aspect of the business, for seemingly obvious reasons. It's also the facet of the game Daniel Bryan may be most underrated in.

With that said, it doesn't matter how smartly you've laid out a match, if the execution is poor, and the timing even worse, it's not going to get over.

Perhaps we've been spoiled. Those old spotfests in the late 1990s and early 2000s were balls to the wall, foot on the accelerator car crashes with test dummies willing to cripple themselves to entertain. They never let up, from start to finish.

This match had that feel at various times, but the emphasis on safety while certainly not a bad thing, took away from the proceedings. If you want to see the proper way to put a guy through a flaming table, go watch Edge spear Mick Foley through one at WrestleMania 22.

Perhaps that bar is too high.

Or perhaps the Ambien level pace of the parking lot brawling and forklift driving was the real culprit. This match had no flow and was dependent on the high spots to get over. The problem was the crowd had its energy sucked out by missing most of the action.

All told, this could have been worse, but the hope was Bryan would tear the house down in his first main event as WWE world heavyweight champion. Put simply, he didn't.

All the best to all the rest:

That's it from me, Cagesiders. Now it's your turn to sound off in the comments section below with all your thoughts on last night's show. How did you like it, if you liked it at all?