The following rant is inspired by the frustrating ending of Extreme Rules 2014: Wyatt vs. Cena, and the culmination of a bubbling undercurrent of anger.

If it weren't for that finish, that creepy-as-hell ending, I would not have written this. Instead, I would have sat at my Xbox (where I watched Extreme Rules), stared at the screen, and then silently fumed over the fact that John Cena still managed to make Bray Wyatt look like a buffoon even in defeat. Or victory, perhaps. In fact, victory. Because let us be honest here: that match, as wonderful as it was in terms of surrealism, was representative of everything that is wrong with John Cena in the post-modern world of wrestling.

John Cena is a fiction, an archetype that no longer exists. Perhaps it never existed in the first place, now that I think about it.

He is supposedly the flawless, nice-guy hero a la Superman. Except unlike Cena, Superman has managed to adjust his message ever so slightly over the years to fit in with the modern world, while at the same time not compromising his ways. The reason the Man of Steel can do what the Man of Kick-Out-At-Two seemingly cannot is a matter of conviction. Everything that Superman says, hokey or old-fashioned or boy scout-ish rings true because you know that deep down, he believes every fucking word he says. And he believes that you too can follow him on his quest to bring about happiness, because that's how much he cares about people. Everything that Cena says, if you listen to it closely and as a human being with the ability to think for yourself (and not parrot what your parents think) comes off as tinny and tired and most decidedly hollow.

Because the character of John Cena only cares about himself.

This promo pisses me off to no end, because every word Cena says SCREAMS smug superiority. He thinks that he is the greatest thing in existence, because he's the man who was able to lift Edge and the Big Show on his shoulders. Who made Triple H tap out like a bitch to the STF. Who has beaten EVERYONE in his path. Hell, look at the thumbnail photo presented to us before you hit play! He is leaning forward, belittling the existence of his opponent.

Oh, and before I forget: No hero, no man who plays himself up as a role model for kids, frigging slaps his opponent so as to goad him into throwing a punch. That's. Not. A. Hero. That's a fucking bully.

The internet wrestling community loves to joke about "SUPERCENA LOLZ" because, well, at first glance Cena looks the part. He is fucking incredibly strong. Seriously, that cannot be emphasized enough. He can take an enormous amount of punishment. (Seriously, before WWE went PG, Cena's speciality was the bloody I Quit match. He bled like Ric Flair.) Kids are supposed to look up to him.

But would Superman really do any of these things? Was he the guy who lorded over humanity? Who loved the limelight because it gave him a sense of self-worth? Who boasted about his strength because it made him the greatest thing in existence? If you're still waffling, here's a visual aid.

THAT'S Superman. He knows he is incredibly strong, incredibly talented, but he doesn't flaunt it. He doesn't dare to abuse that power, because he knows the fragility of the people who support him, and just how important it is that they do not fear and hate him. They matter to him, and he loves and cherishes and respects that sign of trust they give him.

Now let's look back on that promo. You know who Superman really is in this situation?

He started out misunderstood, if not derided as a freak. Slowly but surely, he gained the respect of the masses through genuine acts of talent and respect. Everything he did, we cheered. Others tried to use him for their own benefit, like Lex Luthor. (See: Orton, Randy. H, Triple. Tista, Boo.) But he refused to stoop to their level, the way Superman never compromised his morals to work for Luthor. Bryan wasn't just fighting for himself, he was fighting for US. Because he recognized that the people needed a role model we can actually live up to.

I will never be John Cena, a genetic freak who is incredibly strong and durable. But I bet you you or I could learn to be a Daniel Bryan, a man (or woman) who knows the importance of practice and hard work and who has honed technical skills to the point of razor-sharp perfection, and who understand the precarious balance of what is and isn't socially acceptable when placed in a position of public importance.

Obviously, I am ignoring the heel runs he has done, but in a way they actually emphasize my point. Everything that Daniel Bryan has done, he has done with conviction.

And if nothing else, us regular folks appreciate (and even adore) a man of conviction. 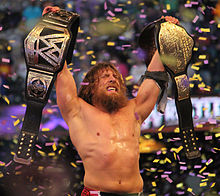 So, where does Bray Wyatt fit into all of this?

Other than, you know, scaring the hell out of us, I suppose.

Bray Wyatt is the evolutionary Jake Roberts. He ain't gonna be siccing a snake on John Cena any time soon, but he will be spending his time on the roster creeping the hell out of everyone - and that has made him memorable. He could retire tomorrow, and people would still remember his name and the crazy stuff he did.

But therein lies the rub. Because, contrary to what the WWE might think, us fans do not want to see Bray Wyatt disappear after a few years (really a few months, because that's how long he's been owning his gimmick). We want to see him hang around, and we want to see him be a dangerous foe for years. I want him to be a lurking, unpredictable fiend who is like a modern-day boogeyman.

But we want it to be believably creepy. And we don't want Windham Rotunda, the man behind the fedora, to waste all of his excellent promo-writing skills on John Cena because Mr. Face-of-the-WWE won't sell a slow burn feud without screwing it up.

The children's choir was great. The kid at the end of Extreme Rules was bizarre. But that's the kind of thing that you make for once in a lifetime. You use up all of that within two weeks of each other??? Then you create a desire in the fans that is not easy to satiate. It's the problem of extreme wrestling, as Jim Cornette put it so eloquently.

As wonderfully insane as ECW was, one could argue that it created in the fans the disease of more. It wasn't enough for Tommy Dreamer to take a piledriver through a flaming table from Raven after having Rhyno gore him through a refrigerator. Eventually, the fans would want to see something really crazy, like everything I listed in the above situation…except on fire. With the Sandman casually drinking in the corner and spraying the crowd in Miller.

How does that relate to Cena and Wyatt? Because Cena refuses to sell anything that isn't titanic in nature, that isn't mind-numbingly insane because he thinks that it will damage his credibility, Bray Wyatt is forced to come up with exceedingly over-the-top antics to keep the crowd interested. Words can't describe just how many times Bray has resurrected this feud after a nonchalant Cena makes a stupid fat joke and tries to bury it. It's the gimmick equivalent of the Undertaker sitting back up…again…and again…and again…and... 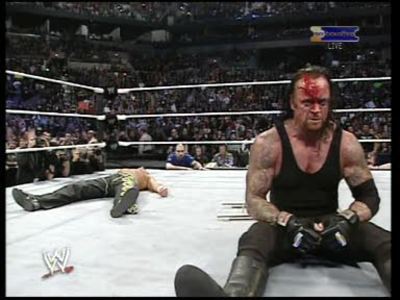 It doesn't matter that Bray won this match. Cena spent the entire fight taking on all three of the Wyatts and holding his own. Just like at Wrestlemania 30. Seriously, I don't care how strong you are. Could ANYONE hang in there with Erick Rowan for that amount of time? Or Luke Harper? Or all fucking three of them? You got no chance in hell.

And while the WWE thinks that they've satiated the fans because Wyatt beat Cena this time, they're wrong. You and I both know that there's gonna be a rubber match between these two, and that Cena is gonna win. Because Cena always wins. And that screwy ending, to me, rang awfully similar to the screwy ending to Starrcade 1997, when Hogan wouldn't take the clean pin from Sting so he had to do it again after…that crap with Macho Man…after a whole 'nother bunch of crap was flying around that almost made it invisible. It just didn't flow right. And then of course Hogan went right back to the top of the rock pile, because he was in love with the spotlight.

Doesn't sound very Superman-like, does it? Almost sounds like... 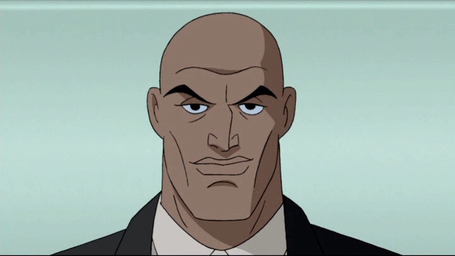 I'll end it on this note. Maybe the reason that Bray Wyatt even got this match in the first place is because of the completely-derided Royal Rumble 2014. Well, it was alllllmost completely derided. There was one starry spot to the affair, something that made people think "Hey, there's the future right there!" A singles match between Bray Wyatt…and Daniel Bryan. And Bryan took the pin cleanly.

Because, setting aside Kayfabe for just a moment, Superman was willing to do whatever was necessary for the greater good. And if that calls for him to lose for the sake of the company? Then he'll do it.

Because he's the hero we really admire.

Oh, and before I forget…there was a time that Superman had a beard, too. Not that one. This one. 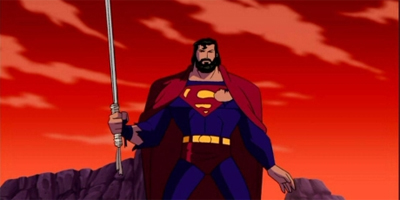