That's a big, big number but not nearly as big as many expected. In fact, most expected that the combination of free trials offered, WrestleMania 30, and the low price point would draw 1 million subscribers. After all, if WrestleMania costs upwards of $70 to order via traditional PPV and fans could simply subscribe to the Network to get six months of PPV shows for that price, why not order?

There will be growth, of course, but the announcement of the first wave of subscribers led to a big drop in stock. After an incredibly successful first quarter thanks to hype for the Network and the pending television rights deal, the price dropped some 19-percent today.

As of this writing (via Google Finance): 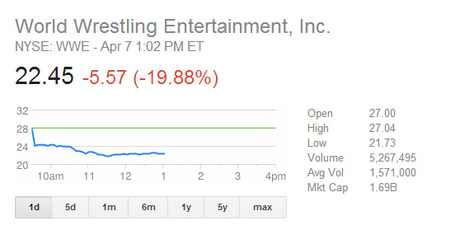 Your thoughts on this, Cagesiders?