Ranking each of the 29 WrestleMania main events from worst to best. Up next is the main event that no one saw coming...and no one wanted to...

(THE ONE WITH THE WORLDS LARGEST TOGA PARTY HOSEJOB)

Oh, Bret. You tried so hard.

The year was 1992. Ric Flair had jumped ship to WWF and helped Undertaker beat Hulk Hogan for the WWF Championship (making him instantly a babyface in my book). The title would later be vacated due to shenanigans, and Flair would win the strap himself at the 1992 Royal Rumble. Randy Savage was named number one contender and beat the "Nature Boy" for the title at WrestleMania VIII.

The two would feud throughout the summer where Flair won the title back after SummerSlam in Wembly. At that same show Bret Hart carried an -- allegedly -- coked out of his mind British Bulldog to a classic Intercontinental title match in the main event. As a result, and for a number of additional reasons -- such as his many years of loyalty, technical acumen in the ring, rapport with fans, and Vince McMahon needing someone to be his company's face with government pressure mounting (mostly that one) -- "The Hitman" was given the WWF championship in October when he beat Flair in his "hometown" of Saskatoon.

Except if you weren't there you wouldn't know that. If you weren't at the house show you might wonder why the guy last seen losing the Intercontinental title on pay-per-view (PPV) was winning the WWF title in an untelevised match.

Hart's championship run was doomed. He faced Shawn Michaels, Razor Ramon and Papa Shango -- glorified mid-carders at the time -- before heading to WrestleMania to defend against Yokozuna. This was essentially CM Punk winning the World Heavyweight Championship (which had just main-evented WrestleMania 24) and defending it against Snitsky in the Raw mid-card. When a mid-carder moves up to the top, he needs to feud with guys who are established as main event acts. If he doesn't, everything gets knocked down a peg.

I do not subscribe to the idea that "the man makes the belt." If you book a belt well enough, you can slide anyone credible into the main event picture, provided he gets clean wins over credible opponents. Once you start wrestling Snitsky or Papa Shango, don't blame the champion when the belt suddenly looks like a mid-card title.

Hart's first run as champion wasn't exactly a dud, but it certainly started that way, and ended that way too (come to think of it, the middle of it wasn't so hot either...okay, it was a dud).

What's so crazy about the state of the champion going into WrestleMania IX was that he was over. Despite the inauspicious start and the feuds with mid-carders (which, again, only makes a former mid-carder/first time champ look like...a mid-card champ) Hart was winning over the people. They were used to him. They liked him. They were paying to see him. They were rooting for him as champion.

Hart wrestles Yokozuna for the title and gets a decent enough match out of the big guy. Yoko was positioned to be the company's top heel and this would be his showcase. Hogan, meanwhile, was wrestling with his sometimes partner (no jokes please) Brutus Beefcake in the mid-card of the PPV. Clearly the era of Hulkamania was giving way to the era of Bret Hhhhhhuh? 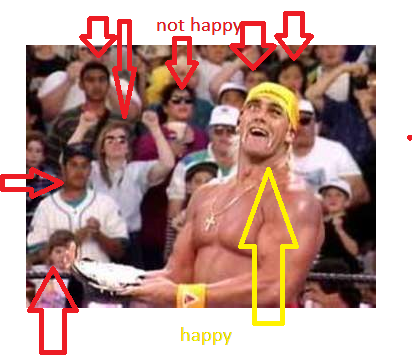 The story goes that Hogan was to drop the belt to Hart on his way to WCW (something Flair apparently didn't want to do, thus the untelevised match), as a passing of the torch match. But Hogan's gonna Hogan and he decided it would be better to drop it to Yokozuna instead. The rest is history.*

The whole PPV was poorly received and would still have been called "disappointing" even if Hart had retained and that had been that. It was headed toward being "horrible" with Yokozuna winning. And then it just became "outright disastrous" with Hogan emerging victorious in the impromptu main event. The only reason this is considered one slot higher than the previous entry is because at least this one featured actual wrestlers.

*You can argue Hogan's logic was sound until you think about it: Yoko beats Bret and then beats Hogan which puts him over as a mega heel and makes it all the more meaningful when he loses. Except Yoko already lost to Hogan...and Yoko beat Bret so how does that make the next face of the company look good? It's Hogan logic, folks, and was driven entirely by pride and an unwillingness for the "once big thing" to put over the "next big thing". You know, the way Andre had done Hogan...brother.

So sound off, Cagesiders. Is this among the worst or did it not get a fair shake? Is it not the horrible, fan-gut punch climax to a lackluster show that it seems to be? There's really no other match worthy of the main event, and no other match was a highlight. The whole show was just kind of there, which is sad considering the uniqueness of the setting. With a show this bland it needed a main event to send the folks home happy. It failed to deliver in such a spectacularly horrible way that it deserves the honor of being deemed one of the worst main events in WrestleMania history.

At least this is the last time we have to read about Hogan being front and center when most people didn't care anymore.