Ranking each of the 29 WrestleMania main events from worst to best. Up next is the the first match in one of WrestleMania's greatest rivalries.

THIS AUSTIN VS. ROCK THING...I THINK WE MAY HAVE SOMETHING HERE

(THE ONE WHERE AUSTIN & ROCK STEAL A SHOW THAT, UP TO THAT POINT, HAD PRETTY MUCH SUCKED)

Now a heel, the fans naturally jumped at the chance to start cheering him. Because that's how smarks roll.

By Survivor Series 1998, The Rock was among the hottest young superstars to come along in years. Forgoing the standard Survivor Series formula, the November event consisted of a tournament to crown the vacant WWF Championship. Why was the title vacant you ask? Well the answer is simple enough. *deeeeeeep inhale...*

Stone Cold Steve Austin, Undertaker, and Kane were in a triple threat match where neither brother of destruction was allowed to pin the other. Instead, they both pinned Austin ... at the same time. Naturally, the title was held up and a match between the sons of Paul Bearer was booked to determine the champion. What about Austin you ask? He was made special referee of the match and ordered to do his job fairly or be "farr'd!" Austin, of course, beat up both men and awarded himself the belt (man, he was great). McMahon then fired Austin, declared the title vacant, and booked a tournament to determine the next champ. What about Austin, you ask? He put a gun to Vince's head and made the boss reinstate him, sign him to a five year deal (coincidentally, five years later Austin would retire), and added him to the tournament. Austin then pulled the trigger, revealing the pistol to be loaded with an "Austin 3:16" flag, like something the Joker would have done to Commissioner Gordon. McMahon was revealed to have...soiled himself during the encounter.

Seriously, I can't wait for all of this to be on the network.

Mick Foley had been Vince's go-to guy to get the title off Austin. As Dude Love, Foley and Austin feuded over the title in the spring but Stone Cold kept walking away with the belt. McMahon appointed Foley (now back to wrestling as Mankind) his "chosen one" for the tournament. Mankind would defeat Austin in the semi-finals thanks to some help from Shane McMahon, Gerald Brisco, and Pat Patterson. Mankind then headed into the finals of the tournament with a head full of steam and seemingly the support of the "Corporation" behind him.

On the other side of the tournament was Rock. The self-appointed "People's Champion" had a fairly easy path to the finals of the event. He defeated Big Bossman in three seconds, rolling him up as soon as he entered the ring, and then defeated Ken Shamrock after the Big Bossman tried to interfere and ending up accidentally helping Rock knock Shamrock out.

Rock's semi-final match was the Undertaker, but just when it looked like Taker had Rock beat, that dastardly Bossman interfered again. In the ensuing chaos Kane shows up and chokeslams Rock, giving him a win via DQ. The crowd didn't care, however. With Austin out, the Rock seemed like the next best hope to crown a babyface champion. It would be like Randy Savage winning the gold back at WrestleMaaaaacMahon just screwed Mankind.

Everything about this was so great. Rock very gradually and subtly turned from Nation of Domination heel to "People's Champion" face. With the fans naturally invested in him, turning him heel was brilliant booking.

Every major piece of the WrestleMania XV main event pie was assembled right there as Survivor Series drew to a close. Mankind asked for an explanation from Vince, and got his answer in the form of a Rock sucker punch and beat down. Shane declared Rock the new "corporate" champion and the trio celebrated to boos and trash raining from the stands.

Then Austin showed up. We're still four months away from WrestleMania but as Austin and Rock brawled in the ring, it was obvious what the end game of this story would be.

Rock and Mankind would trade the belt between Survivor Series and WrestleMania, teasing a possible triple threat match for WrestleMania. Instead, Mankind won the right to referee the contest.

Austin, meanwhile, punched his ticket to the main event on Valentines Eve. McMahon had won the Royal Rumble, denying Stone Cold his third straight victory in the event. The two met in a steel cage at the February PPV with Austin needing to win in order to secure a spot in the title match. Thanks to a debuting Paul Wight (soon to be dubbed Big Show), Austin won the match. Poor stupid Big Show threw Austin into the cage, which gave way, allowing Austin to hit the floor and secure a second WrestleMania main event opportunity. It was the first in what would be a long career of doing silly things that made no sense (if you're wondering, yes, Big Show would change from heel to face within a month...then he'd go back to heel...then face again).

The build up to the main event was marvelous. The beer bath on the go home RAW is probably a top five WWF/E moment and one of the times where the good guy pulls one over on the bad guy before going on to win the title. Usually, the heel stands tall on the RAW before WrestleMania, but sometimes it's okay to wink at the fans who all know the good guy's gonna win anyway (props to the guy in the WrestleMania crowd with the "I bet Austin wins" sign).

Its unfortunate that the WrestleMania show, by and large, stunk to high heaven. The top feud was money but everything under was lacking. This was still the era where, despite a lot of very popular acts on the roster, Monday Night Raw was still "The Stone Cold Stunner Show." It would be another year, incidentally without Austin, before the flagship program would be supported on the shoulders of many top level guys.

That's not to say Rock didn't carry his weight in the feud or as champion. He certainly did, and he would only continue to improve as a character over the next year. Nevertheless, at this point, Austin was MVP of the whole promotion.

The match between them here, the first of three WrestleMania encounters, is perhaps the most underrated of the trio. I think having to compare it to the others, especially the WrestleMania 17 match, causes it to be unfairly regarded. It lacks an "epic" feel to it, mostly because Rock was so young and new to the main event stage, but makes up for it by having a tremendous amount of intensity and a hot crowd. It probably helped that the crowd had so little to cheer for during the first two and a half hours of the show. They had stored up all their energy for the final half hour.

Watching this back for the first time in a long time I forgot just how much FUN this match was. Everything was sold so well with Jerry Lawler heeling it up on commentary and Jim Ross just having verbal orgasms with every flurry of Austin offense. The ending sequence, with Mankind laying out Vince, Rock taking a Stunner (which he sells like he just received a Mortal Kombat finisher) and Austin getting the win all happens amidst a constant ovation from the crowd. They were just having a blast through the whole thing.

Austin too, as his post-match celebration was maybe the longest in history. I think he downed eight cans of beer, even sharing a few with Earl Hebner (who jumped to the second rope to celebrate like HE was the champion). Every time you think Austin is done, he gets all giddy again and calls for more drinks and more celebration. Again, it's just so much darn fun to watch. Of course it ends with McMahon taking a stunner and Austin posing with his boot literally on Vince's throat (photo via WWE.com): 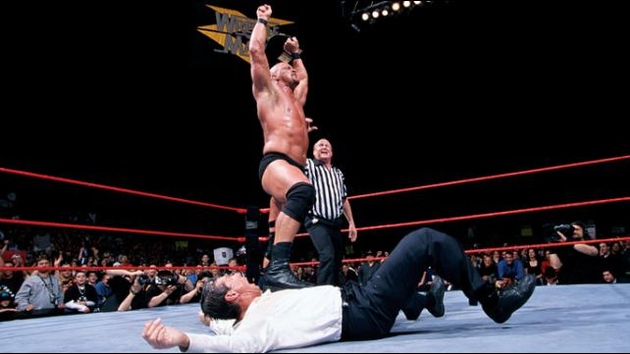 What a great ending.

I'll be honest, when I first sketched out this list, I had this main event flipped with the WrestleMania 14 main event. I thought the historical significance gave it the edge over this one, but after watching both I realized I was having way more fun watching this than I was watching the one from the year prior. Isn't the point of watching this silly pseudo-sport to be entertained? You won't find many more entertaining main events than this one. For that reason, more than any other, I consider it the ninth best main event in WrestleMania history.

Sound off, Cagesiders. Agree with the placement or no? Who out there has been watching long enough to remember seeing this live? Do you remember when the product may not have been as good in-ring, but was certainly two hours of "insanity" every week? Don't give me "the Attitude Era sucked" because it didn't. It was different than today, and in fact it was so different it's almost incomparable.

I'm not going to lament the loss of the Attitude Era; I love "wrestling" and the in-ring product is as good now as it has ever been. And I'm actually glad there's a product on now that I can watch with my seven-year-old (who is nuts for Hulk Hogan thanks to the WWE network), but I think there was a sense of spontaneity and fun that is lacking on a weekly basis today. It was certainly there in this main event.

Tune in tomorrow as the next main event match on the list features wrestling's strangest dress up party. And we've already done WrestleMania IX, so...