Ranking each of the 29 WrestleMania main events from worst to best. Up next is the the match that climaxed a "once in a lifetime" year-long feud...before doing it again the next year.

(THE ONE YOU CAN'T SEE BECAUSE OF THE GIANT PALM TREES)

The year was 2011. On Valentines Day, The Rock returned to WWE and was announced as the host for WrestleMania 27. He came out with a pearly white smile on his face and looking as big as a house.

That was pretty much the high point of his mic work.

Cena and Rock traded verbal jabs in the run up to WrestleMania 27, while The Miz kind of stood in the background like the third wheel he was. The tension between challenger and host reached a boiling point on the go home episode of RAW when Cena hit an Attitude Adjustment on The People's Champion. The actual champion, meanwhile, smirked (in the background).

Boy this is hard to write about. It all sucks.

You know what happens next. It's one of the worst WrestleMania main events of all time. Even more so when, on the RAW after WrestleMania, The Rock challenged Cena to a match ... at next year's WrestleMania.

The crowd (90% of whom had paid top dollar to watch the previous night's (not so) supershow) just LOVED that.

For the first time ever, the main event match was set a year in advance. Rock made sporadic appearances for the rest of 2011 (most notably in the Survivor Series tag match) but mostly appeared "via satellite."

If you were watching back then, you're probably familiar with the meme: 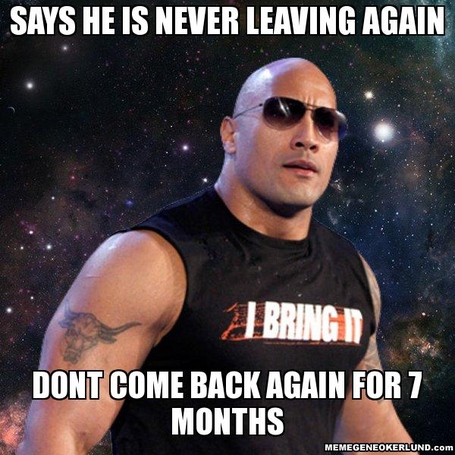 It was the predecessor to this one that popped up the next year. 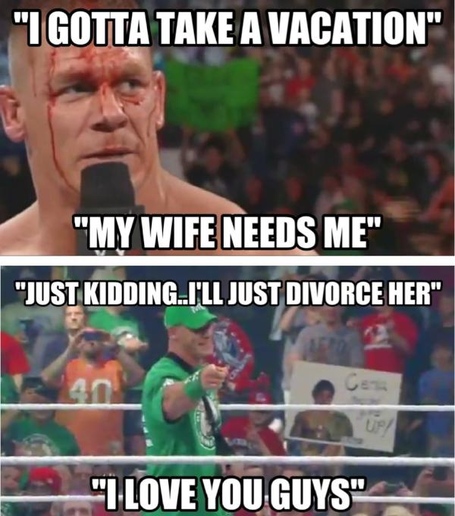 Rock played the heel, beloved by fans, who cut down Cena's character and his "8-year-old fanbase." Cena played the face, booed more often than not, who basically begged for cheers in every city from sea to shinning sea.

The feud consisted of "I love the WWE, this is home" vs. "I'm here every week, don't love him, love me!"

In the week to week build up it got old and promised "appearances" of the Rock tended to elicit less and less excitement with each pre-recorded promo.

And yet, for all its faults, I think the feud worked. I mean, sure, Rock wasn't the same as he was in 2001, but the product was TV14 back then; everything was toned down and his promos reflected that. Cena was still in his "most insufferable" stage that ran from 2010 to SummerSlam 2013. The characters in the feud weren't the best, but they were the undisputed top dogs in the promotion (sorry, CM Punk).

Seeing two titans slowly running toward each other gets a little boring if you are watching them step for step, but as they get closer and closer you can't help but inch up to the edge of your seat.

The WWE production team were the real MVPs of the feud, as the video packages sold this as a true generational affair. Going back to WrestleMania 18, the video hype package focused on the particulars of the feud between Hulk Hogan and Rock. It didn't really sell the significance of the match itself. But Rock vs. Cena was sold entirely on it being a "dream match." By the time Rock started showing up on Monday night's, the build to the match took off like a rocket and didn't stop until they got to Miami.

I love the set design for this WrestleMania.

Because I watched it on TV.

Had I been there, I probably wouldn't have liked it so much, what with the GIGANTIC palm trees and all. Still, the sight of a tricked out Sun Life Stadium, with the little ring at the 50 yard line surrounded by a sea of wrestling fans is a spectacular sight.

The aforementioned production team pulled out all the stops; each guy had his own designated color used in the promotional material (Cena with blue, Rock with yellow), signs hyping "Cenation" or "Team Bring It" that littered RAW arenas dotted the WrestleMania crowd. Both guys had their own (stupid) musical act playing them out.

On the other hand, the "We are young" musical accompaniment to the match is not only a great song for the feud, it's a great song for any WrestleMania. Whether you like the song or not, look at the lyrics:

Tell me that's not everything they hype WrestleMania to be.

The match was billed as "once in a lifetime" (no jokes, please). The venue was huge. The crowd was hyped (and undeterred by MGK's moronic "ego vs. underdog" rant). The combatants were iconic. The stage was set.

And the match was good enough.

I know a lot of people were hard on it but I thought it was a solid main event bout considering the wrestlers working it. Both of these guys have big, epic and classic matches on their resume but they both tend to rise to the level of their challenger. For comparisons sake, both of them have had crappy matches with Big Show and great matches with CM Punk. Against each other, this match was in between. It wasn't great but it didn't suck. The sequel sucked but I think that was more because Rock was injured early into the contest and the ending was poorly scripted.

This match was good enough. Yes, Rock and Cena lay down in the middle of the ring and take a nap about 10 minutes in, but even with that, the hot crowd, epic feeling, and great ending (Cena going for a People's Elbow when he could have won the match, and then losing because of his arrogance, is among the best "endings" to a main event match) lift this main event to a place worthy to be called the 11th best main event in WrestleMania history.

Sound off, Cagesiders. Is this main event ranked too high? It certainly isn't the 11th best "match" on the list, but you can't deny how epic the encounter was. Let us know your thoughts on the main event in the comments below.

Tomorrow's main event takes us back to a time when the top two wrestlers wrestled for the top wrestling belt in the wrestling promotion.