One man won the Royal Rumble match. The other was World Heavyweight Champion at WrestleMania last year. But does anyone care? We're not sure we do, but it's our journalistic responsibility to bring you this preview.

"Don't turn a work into a shoot" Twitter Grudge Match

The evil Batista continues his reign of terror in WWE at Elimination Chamber tonight (Sun., Feb. 23, 2014) at the Target Center in Minneapolis, Minnesota, as the hero of the masses, Alberto Del Rio, seeks to save us all.

Tale of the Tape

Notable Accomplishments: Got rejected by WCW in it's dying days, Belly Button Tattoo Quarterly: Tattoo of the Year 2008, fashion inspiration for Euro trash, Only returning star to get heat upon arrival

How he got here: dating a Marvel executive (I mean that's the only reasonable explanation for getting the role of Drax, right?) and steroids (allegedly)

Hails from: The legendary seed of Dos Caras 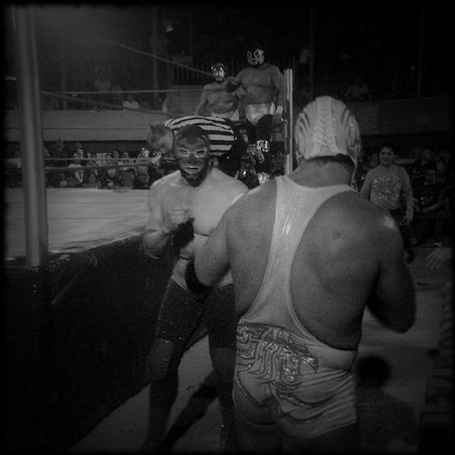 Notable Accomplishments: Survived Mistico's entourage pulling a gun on him, longest sustained push without getting over in WWE history, Snoopy Award for Excellence in Scarf Wearing, Former-BFF with Ricardo Rodriguez

How he got here: Ask Zeb Colter

I've got nothing. We all know that this match means nothing and is just a way to keep Batista busy. The only thing of interest is how bad they have Batista beat ADR.

Will ADR get significant offense?

Will it go more than 5 minutes?

You know where you'll find the answers to those and all of your Elimination Chamber-related questions, right?