Where the WWE Raw Main Event is a WCW Match. No I don't understand it either.

So where were we?

Well, we had a purchased WCW franchise with no show, no stars and an angle that has more to do with the McMahon family than the Monday Night Wars.

And so Vince McMahon had opted for a slow burn angle with WCW wrestlers coming interrupting matches in the WWE shows and beating the tar out of midcarders.

But for all this what you still had was a bunch of wrestlers that really couldn't get established. The Shield were bad-asses because the beat the tar out of opponents but then had the chance to put a big 'W' in their column on a big PPV against Ryback, Kane and Daniel Bryan soon after. Furthermore, the opponents they were kicking the crap out of were headliners- John Cena, Ryback and Daniel Bryan to name a few. WCW stars were getting lost in the mire of the midcard and there was little way for them to get a push.

The thing is that for all intents and purposes in the kayfabe side of things, WWE and WCW were still rivals. Shane had one company and Vince had another. But in the real world Vince had obviously not given up hope on the idea of WCW having some sort of show. To do that, he would have to prove that there was a market for these WCW superstars.

An so kayfabe logic and business logic collided in the most spectacular way.

On the aforementioned date, Jim Ross and Paul Heyman stood up from the Raw commentator's desk and simply said that it was time to hand over the show to WCW. That's right, the WWE staff were going to just walk away from their ring and their equipment and their stage so that the rivals could put on a show. 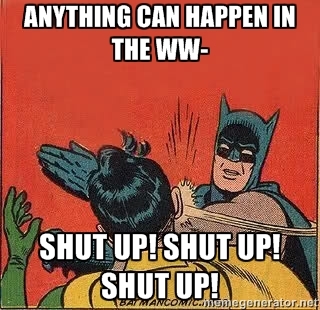 Naturally the fans were a little...confused by this. I imagine their reaction would have been something like this.

Fan 2: Hey, apparently it's going to be a WCW main event.

Fan 1: What, with two WCW wrestlers?

Fan 1: Who am I supposed to cheer for then? Aren't they bashing the crap out of our wrestlers?

Fact of the matter is, Vince really screwed up. He had one eye on the kayfabe story with Shane O'Mac as president of the new, revitalised (or as revitalised as a franchise can get without any TV show) WCW but on the other was trying to promote these guys as able to stand up on their own two feet- despite the fact that all of their actions before this had been to try and usurp the WWE performers.

While this was all happening of course, because he's Vince, he wanted to make ABSOLUTELY CLEAR that WWE was the superior product.

So it came to pass that despite all these worries, Booker T would defend his WCW World Heavyweight Championship on Raw against...Buff Bagwell.

Look, Booker is a tremendous athlete and deserves every plaudit he receives, but Bagwell?! No way. There have been several tales told about Bagwell's behaviour and demeanour in the final days of WCW- so much so that Vince had vowed not to hire him. Now he had a World Title Shot?! Why not give it to someone like DDP (actually they would do this on Smack Down) or Lance Storm- consummate professionals.

But anyway onto the match itself.

First thing that has to be acknowledged is the commentary which is beyond irritating. Essentially it is the WWE version of Year Zero, with WCW's heritage shamefully ripped from them. What made it more shameful was that many of the lines were delivered by WCW great Arn Anderson. Some of these included saying Booker T has "done it all...he has achieved the pinnacle of success, but even Booker T didn't think he would be headlining Raw" they also claimed that "they owed all this [the match] to the beautiful...and intelligent Linda McMahon" (it was McMahon in kayfabe that decreed this main event had to happen). If they are not sucking up to the WWE bigwigs then they are talking about why Mr McMahon hasn't allowed them a share of the pie. Between all this discussion, there's very little actual calling of the match- which to be frank- could use all the help it could get.

This is because said match is bizarre in that it seems like it like it can't decide whether it's a PPV match or a run of the mill TV match. There's a point about five minutes in where both performers lie motionless on the ground writhing in pain like in many long PPV matches- urging themselve to get up. But 5 minutes in it just looks silly. In fact, the whole match is paced like the last 8 minutes of a 30 min PPV match rather than a high octane 10 min main event TV match- giving the crowd plenty of time to let their feelings be known.

And boy do they give it to them.

Look, can you really blame them? I imagine many had paid good money waiting to see the likes of the Rock or Stone Cold in the Main Even and instead they got Buff Bagwell (Buff Bagwell?!?!- I'm sorry, but geez, Vince really). Furthermore, this wasn't a championship that had been built up over a number of weeks through cleverly mastered stroytelling (the unkind might theorise this was because Vince was trying to create as authentic a WCW product as possible) but rather a hastily cobbled together match for a title that for all intents and purposes was an unknown on WWE TV.

There is a interesting notion that the running in of Austin and Angle at the end was actually an audible by McMahon after he saw the clusterfuck that was being enacting in front of his eyes and he wanted to change the dynamics of the situation. Whether it was true or not, it certainly got a cheer from the crowd in an otherwise hostile match. The problem was that it also essentially showed that while WCW guys wouldn't touch Austin, Austin could stomp a mudhole in the WCW Champion.

So essentially Vince had to go back to the drawing board again. Without a separate show and with a rabid WWE audience that was in no way prepared to accept upper midcard WCW stars as main event on the WWE programming, Vince decided to take the whole WCW roster and turn it heel.

And he had one ace up his sleeve to help. Paul Heyman's Extreme Championship Wrestling faction was about to join the fray. With Heyman's skills on the mic as a compelling promo worker and storyteller, there was every chance that a new more purposeful InVasion angle could now- 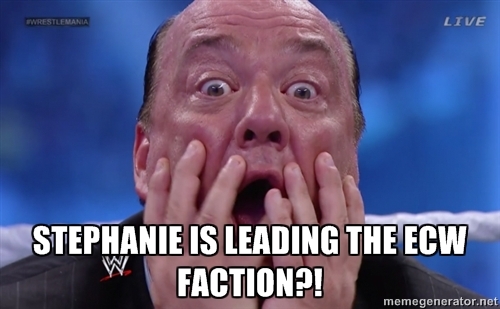 I really wish that was a joke. But instead it's the subject of article 3. See you then!