Where Vince started as he meant to go on. Badly.

When it comes to missed opportunities they do not come any bigger than the Invasion Angle. What many in the greater wrestling community were salivating over what they thought would be their fantasy matches given life, what they got instead was a massive disappointment that even the WWE tends to gloss over now. Over the next few annals I will go through all of the Invasion angles right up until Wrestlemania 18, which saw the end of the two belted Undisputed Championship as well as Hogan breaking up with the nWo.

So where did it all begin?

Well, let's take it from March 26th 2001- the very last episode of Nitro- what should have been a truly touching moment for all concerned who had given their blood, sweat and tears to WCW. And to be fair, in some ways it was.

But throughout the show, hovering in the background like a bad smell, was this guy. 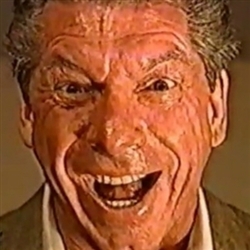 Vincent Kennedy McMahon had bought the once $500 million WCW franchise for a paltry $3 million. That was $3 million dollars for the rights, the sets, the rings, the TV video library (which in itself to some wrestling fans would be considered priceless). Everyone was gearing for the big angle.

Much has been made about what happened down the line, but right from the start McMahon had made 2 fatal errors: 1) He underestimated how much the WWE audience actually cared about the notion of a real WCW vs WWE card and 2) He actually overestimated the amount the network cared.

Point one was made immediately apparent during the last episode of Nitro when in a locker room full of big names to be the figure head of the WCW invasion, the WWE decided upon... 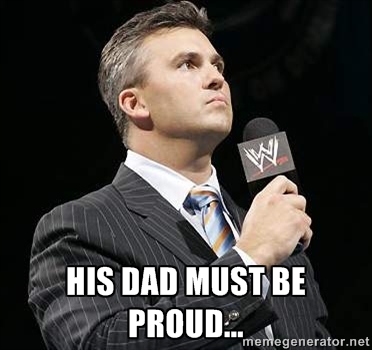 Yes, Shane McMahon. Ric Flair, Sting and others were all available during that last show but instead the WWE decides to go for SHANE?!

What's worse is that if you had Ric Flair leading the charge, the whole angle would have got a jolt. People know Flair and to have him come out and fire the first shot across the bows would have been dynamite. Instead you got a guy who is best known for being the son of the guy who was the owner of the other company!!! His heritage with the WCW brand? Bubcus. But apparently a upper midcard heel on the rival brand was a better fit that RICK FUCKING FLAIR!!!

Look at them grandstanding...

While this problem would be exacerbated in time, it's point 2 that was probably more important during the time of the inception of the show for the simple reason it no doubt totally transformed the intended shape of the angle and how it would play out.

In early 2001 Vince had 4 hours of Prime Time TV on Mondays and Thursdays with Raw and Smackdown thanks to Viacom's TNN. Vince's idea was to add a Saturday Night TV show for WCW as well as new PPVs for the 'brand'. Then, when both became established, the real WWE/WCW war could start in earnest.

From a wrestling perspective, this made some sense. It allowed the WWE audience to acquaint themselves with the WCW superstars in such a way that would not put the superstars under too much scrutiny. Furthermore, the WWE audience could help McMahon decide which way to go forward once they got to the crossover part of the angle.

Unfortunately Viacom did not quite see things in the same light.

Viacom believed that 4 hours of wrestling was plenty and that another prime time show would oversaturate the market. Furthermore, the company was no doubt concerned with the idea of launching such a toxic franchise on their network. After all, McMahon had done trouncing those basket cases in Atlanta and now he was trying to tell them that it would be a great idea if they actually brought it over to their network?!

So the question was what exactly could Vince do? He couldn't narrow down all the angles to one show- there was too many superstars and he risked alienating his WWE audience that he done so much to build and maintain during the Monday Night Wars. Likewise if the network were none too pleased about dumping WCW onto Saturday night, imagine how much they would hate WCW going up against the NFL on Mondays? Or Friends on Thursdays?

This was the major problem that McMahon faced early during the InVasion angle. He knew he had to rehabilitate the WCW brand, but the obvious solution was not going to work.

This of course wasn't helped by the fact that out of all the big names that WCW had, the WWE did not sign up Sting, Ric Flair, Hulk Hogan, Goldberg, Kevin Nash and Scott Hall. Now, to be fair McMahon rightly claimed that his company would have to pay out their ludicrously inflated contracts- a fact that would cause some friction with his own locker room who were getting a fraction of the wage. So instead McMahon purchased the midcard wrestlers who had essentially provided good wrestling, but had no chance to blossom under the political tyranny of the WCW locker room.

Vince therefore decided to have the WCW wrestlers attack the WWE wrestlers in matches the way the Shield did in late 2012 and early 2013. The trouble was while the Shield immediately went after the big guns in a big moment, the first wrestler WCW attacked was none other than...Bradshaw on May 28 2001.

And this isn't Bradshaw when he was JBL and on his long World Title reign. This is Bradshaw during his APA time. And it wasn't like it had an amazing impact or it put Bradshaw in traction. Nor did it give the superstar in question (Lance Storm- for all those playing the home game) a massive push. All the WWE audience saw was a wrestler that they were...vaguely familiar with at best attacking one of their midcarders. Compare that to when the Shield came out of nowhere on a PPV and powerbombed Ryback through a table and you can see the difference. Indeed, the only time a top card WWE talent got attacked in the early weeks, the perpetrator was Shane McMahon, a statement that essentially said it all to the 24 WCW guys.

King of the Ring saw the first real confrontation between Diamond Dallas Page and the Undertaker which became a feud so bad that it deserves its own spinoff artcile in this series. I will therefore consign myself to say that their face off at KOTR did nothing to convince anyone that this was a level playing field.

All this would perhaps have been fixable though, had it not been for the massive clusterfuck that was to follow on July 2 2001 at Tacoma Washington, where Raw had a WCW main event.

Stay tuned next to hear about the carnage which followed.