Off the Top Rope: A Cagesider Podcast (Episode 47): WCW Starrcade 1993

"Off The Top Rope": Is a Cagesider Podcast made for you, by fans like you -- all about Pro Wrestling, of course! This week's episode with Mike & Rex features talk about WCW Starrcade 1993 and more!

Share All sharing options for: Off the Top Rope: A Cagesider Podcast (Episode 47): WCW Starrcade 1993

The latest episode of Off The Top Rope is here!

The Cagesider's Pro Wrestling Podcast - made for you - by fans like you, has been made available for your listening pleasure as of today (January 31, 2014), by none-other-than your fellow Cagesiders, Mike (vfn) & Rex Ivanovic(the author formerly known as Buckeye Brawler).

Each episode features the guys discussing the latest news and goings-on of note in the pro wrestling world. Plus, they review a classic professional wrestling event.

In this episode...or should I say, supersized episode, Mike and Rex are joined by Mike of Basically a Sports Show as they talk the Royal Rumble, Daniel Bryan and hijacking, Vince Russo returning to TNA, Bray Wyatt finally getting a chance to put on a good match, Raw, Elimination Chamber, SmackDown spoilers, and Genesis Part 2.

Then, after the break, time to jump right back to news with breaking CM Punk stuff and hypotheticals. Then the theory that if one match could save a show, that show is Starrcade 93. Disappointing pairings, dated feeling tag matches, and 30 minutes with the Nasty Boys.

Rex bails, but the show finishes with Mike and Mike's MVPs and LVPs. Next week, although not mentioned on air, they'll be reviewing SummerSlam 1989! 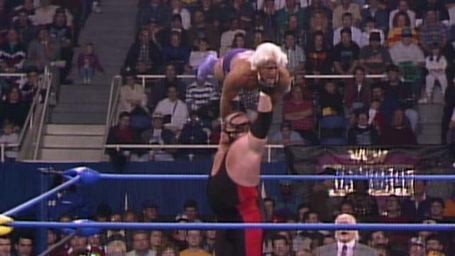 FOLLOW OFF THE TOP ROPE: A PRO WRESTLING PODCAST --

SUBSCRIBE VIA RSS or VIA ITUNES | LISTEN ON STITCHER

"Don't forget to let us know what you thought of this episode, your thoughts on 'Starrcade' 1993, or just flat out what you think about our show in general, via any of the ways to get in touch with us...

"Feel free to email us your thoughts and we might read them on the air! Be sure to follow us on social media:@Mike & @Rex on Twitter, Mike on Tumblr, and subscribe to Rex right here on SBNation.

Editorial Note: This Fan-Podcast has been promoted to the front page and various sections within Cageside Seats for your enjoyment, Cagesiders! It is however, solely a production created by Fans for Fans, please remember, the opinions expressed herein are solely the subjective opinions of "Mike & Rex" and do not necessarily reflect the views of Cageside Seats Management, Editors or Staff.