His name is Roddy Piper and Cageside Seats readers have reported back on what they love and loathe about the "Hot Rod". Here's the full evaluation.

Today we are looking at Roddy Piper, let's see what you guys thought.

LoneStranger - "I bought the special ticket that let me get autographs from all the big guys there. My wife went with me, but didn’t have a ticket for the autographs, so she just kinda lurked a couple arms’ lengths away from me as we went down the line. The guys smiled, shook hands, signed autographs, but it seemed like they were doing a job and they’d rather be somewhere else. When we got to Piper though, he was extremely friendly. He didn’t stay sitting behind his table, but rather stood up the whole time and walked up to me to give me his full attention. He went out of his way to pull my wife over and talk to her as much as he talked to me. I can’t remember the conversation, but I do remember he made it seem like he was a friend, he cared about us, and he really appreciated that we were there." 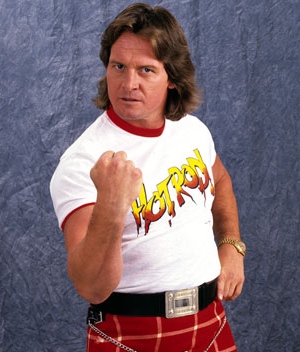 My favorite comment goes to *Asterisk* - "Those 90s WCW matches suuuuucked. I know Piper drew a ton of money with those horrible Hogan matches, so I give them at least a little leeway: but Piper debuted in 1968, and should’ve retired after the hip replacement. It’s a miracle he can still walk unassisted. Those matches were completely irresponsible to Piper’s health, an insult to the talent on the undercard, and dangerous to the health of the eyes and the brains of people watching."

Thanks for commenting! Tomorrow's pick is red hot!