If you're still wondering why the powers that be within WWE treat Daniel Bryan the way they do, this handy-dandy little chart might help.

As mentioned earlier on the site today, WWE has a big problem with Daniel Bryan on its hands. That's because fans feel strongly enough about him at live venues to hijack shows -- like last night's (Sun., Jan. 26, 2014) Royal Rumble pay-per-view (PPV) in Pittsburgh -- with chants and boisterous booing, but that attitude has translated to other areas top executives deem important for business.

But how do we know this? Well, Christopher Harrington of IndeedWrestling.com has compiled statistics showcasing the average viewer change by segment on Monday Night Raw throughout 2013 and, well, it's not kind to Bryan. 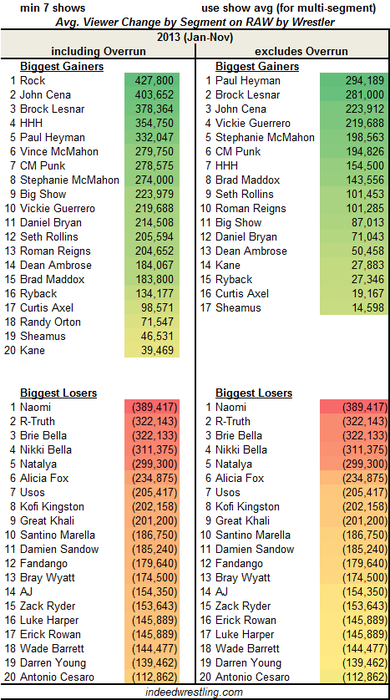 There are a lot of variables at play here, such as creative direction for each character, who else was in each segment, the storyline at any given time, accounting for matches vs. angles, and so on and so forth, but this is, at the very least, one indicator of who is pulling in viewers and who is not.

He's not losing viewers, mind you, but he's nowhere near the top. By these metrics, pushing Big Show in his spot was the right decision. Then again, look how far down that list WWE World Heavyweight Champion Randy Orton is sitting.

And you'll note John Cena, even after all these years, is still right there at the top with the best of them.

Your thoughts on this, Cagesiders?

Again, go give some love to Chris Harrington for his hard work here. This is great stuff.