Her name is Mickie James and Cageside Seats readers have reported back on what they love and loathe about The Former's Women's Champ. Here's the full evaluation.

Whew, getting to this one a little late, that's my bad! Okay, right to the good stuff!

Favorite comment goes to Hollywood J Blaq -  "It’s MICKIE FRICKIN’ JAMES!!! Last of a dying breed of women who actually progressed women’s wrestling. After Trish and Lita retired, you didn’t sweat it because Mickie was queen of the mountain at the time. She can cut promos better than most. Her in-ring skill was top notch. Excellent as either a face or a heel. And my god she is a beauty. And her freaky deaky photoshoot from back in the day." 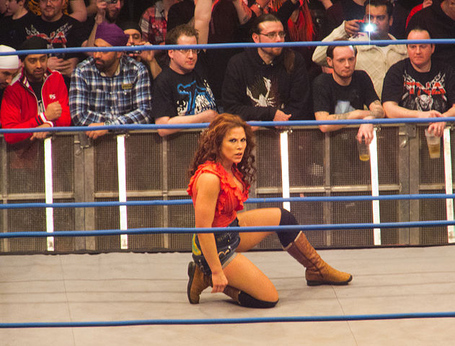 Favorite comment will go to Hand Young - "That John Cena railroaded her career. That she’s not WWE TV and so many untalented Divas are." I partly had to give it to them because of their great name!

Lastly, the poll! With 128 votes, Ms. James' average score is 4.1. Not bad, overall a fair score, believe it's the second highest of all the women we've done so far.

That's it for me Cagesiders, tomorrow will be a King of the Ring winner!