The fallout from last night's (Aug. 18, 2013) "SummerSlam" pay-per-view (PPV) in Los Angeles is being felt already and WWE is exploiting it as quickly as possible by working a conspiracy angle following Triple H's big heel turn at the show.

Last night's (Sun., Aug. 18, 2013) WWE SummerSlam pay-per-view (PPV) extravaganza at the Staples Center in Los Angeles, California, concluded with an angle for the ages. Daniel Bryan, at the hottest he's ever been and after having been pushed to the moon for the past few months, defeated John Cena clean via pinfall to win the WWE championship. His reign lasted all of five minutes.

That's because when Randy Orton came down to tease cashing in his Money in the Bank briefcase, Triple H turned heel by hitting Bryan with a Pedigree out of nowhere to the shock of everyone in the arena. Orton then took advantage, not even executing one single move on his fallen foe, and pinned him to win the title as "The Game" counted it down with three slaps of the mat.

Already, WWE.com is out in front of this playing up a conspiracy angle with a poll asking who was aware of the plan beforehand: 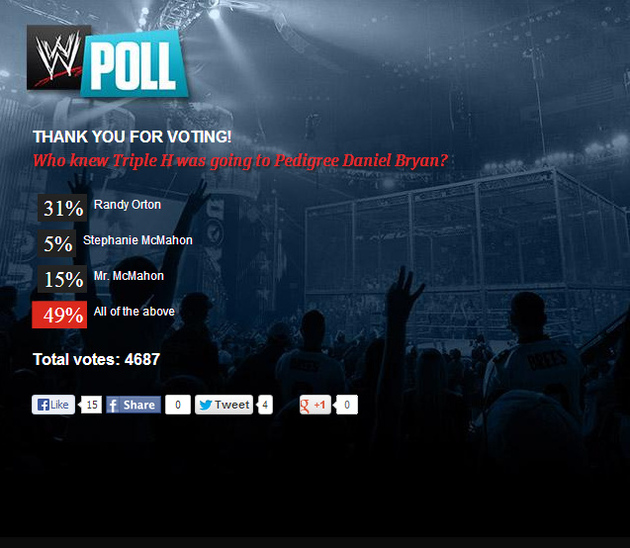 You can click here to go vote in the poll yourself, and we encourage you to do so. Just come back here and tell us why you think what you do.

The question is whether or not that's still the plan and if it is, how long will it take before Vince turns.

To my eyes, this sets up wonderfully for the entire McMahon family to be against Bryan in his continued pursuit of the WWE title. The storyline as of right now seems to be heading in the direction that Triple H agreed with his father-in-law that Bryan isn't cut out to be champion and decided to make sure Orton, whom they do believe in, would walk out of SummerSlam with the title.

Now it's Bryan against the world.

We'll get our answers, or at least some of them, later on tonight on Monday Night Raw. Stay tuned!