WWE NXT results and reactions from July 31: We're only dancing

We say goodbye to one faction and welcome another back to the developmental show. There's lots of dancing, talking about dancing, a male model and a crushtastic interviewer on our way to a big tag team main event. Catch up on all the latest moves with our NXT recap.

Share All sharing options for: WWE NXT results and reactions from July 31: We're only dancing

Bada-Boom...realest guys in the room!

Enzo Amore, who shaved off his tickler for this appearance, and Big Cas stroll down the ramp to kick us off this week. Without too much lead in, Colin Cassady gets the microphone to do his version of the NY/NJ schtick. He does okay, but isn't as smooth or natural as the Certified G.

Things get awkward when Cas sings while Enzo sort of dances. That's when Tons of Funk show up, and I check to make sure I'm watching the right HuluPlus WWE show.

Amore and Colin try to bail, but William Regal and Tony Dawson insist that Sweet T and Brodus Clay are here for a dance party. The heels' feud-mate Mason Ryan shows up and shepherds them back to the ring, where Big Cas gets a tandem Call My Momma splash and his partner runs into an unimpressive-looking suplex facebuster thing from the Welshman.

Ryan dances (poorly) with the Funkasaurus and his teammate.

In what counts as a long time without a match for a NXT open, our next segment takes us backstage where Commissioner Dusty Rhodes is heaping praise on new Women's champion Paige and her fallen foe Emma for their performance last week. They're interrupted by the First Lady of NXT, Summer Rae, who says that Paige wouldn't even be champ if the Australian runner-up hadn't stolen their semi-final tournament match.

This breaks down to our second dance-based non-match of the show, as next week will feature Emma vs. Summer Rae in a "dance battle". The champ says what I was thinking when she screams "SHUT UP" at everyone else in the scene.

in approximately three and a half minutes via pinfall

A bit of a comedown after last week's title bout, but both women show promise.

Now, my favorite female working for the 'E is set to interview Tyler Breeze. If there were any doubts that Breeze is just channeling Ben Stiller from Zoolander, this puts them to rest. His cadence is note-perfect and he does everything except refer to his "looks" by name. Renee Young is great with her reactions to the Gorgeous one: 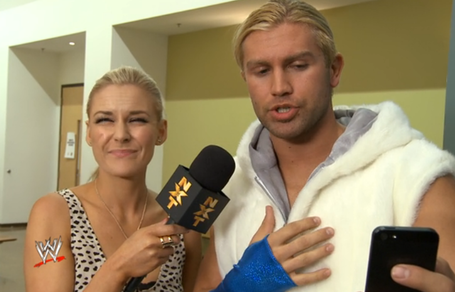 The interview is video-bombed by CJ Parker. The live crowd seemed to enjoy that, or somebody in the truck broke out the laugh track.

Bray picks him up for a Sister Abigail before grabbing the mic. The crowd chants for another finisher, which seems to cause Wyatt to break into a legit smile. He then cuts what was almost a face promo; it was definitely still cult-ish, but more in a motivational way, saying that he was an example that outcasts can change the world.

This is their goodbye to NXT, as they're off to "bring down the machine". If we need him, we can always look to the sky and follow the buzzards. A "Thank You, Bray" chant from the faithful is cut off with abrupt static.

(Sniff) It's like your favorite local band being signed to a major label...so bittersweet.

Tag champs Adrian Neville and Corey Graves converse backstage. This, (1) serves to show that both guys can deliver lines but have a ways to go to seem natural speaking on camera and (2) is weirdly misplaced because they talk about needing to team-up to show the Wyatt Family what it means to go through hell. They were just in the ring saying they're leaving, fellas, I think you're safe.

in approximately two minutes via submission

Bai Gawd! It's The Shield! Now, I don't think Ambrose lost out on the blue briefcase to teach the trio a lesson...but, "you're gonna go work a program in developmental when the Wyatts get called up" is a pretty good way to humble some young guys.

Seth Rollins starts with the stick, and, man, do I continue to be impressed with his skill as an interview. He puts over the WWE tag titles as being superior to the NXT tag titles. Dean Ambrose is his usual brilliant self, calling Neville a thief who only has a belt because he stole Kassius Ohno's spot.

The Jumpin' Geordie immediately challenges Ambrose to a match for his United States championship. The Hound of Justice agrees - for next week. Adrian promises to take the trio apart "brick by brick" as Rollins and Roman Reigns laugh at him.

in approximately twelve minutes via pinfall when Kruger pins Dallas

Which, unfortunately probably means that Dallas will retain in their title match next week. Shoot.

This was a real mixed bag of a show. We're back to a lot of squashes in order to advance stories, and while the main event was good, I doubt it's something I'll return to often, if at all. More Tyler Breeze and Renee Young, though, and I'll take The Shield as a means to ween us off The Wyatt Family.

What'd you like? Dislike? Not give a crap about? Let's hear about it in the comments!