Check out the official poster for the TNA Slammiversary 2013 pay-per-view (PPV) event, featuring Sting vs. Bully Ray for the heavyweight title.

Share All sharing options for: TNA Slammiversary 2013 poster: Sting vs. Bully Ray for the heavyweight title

Just last night (May 2, 2013) on Impact, the main event to the TNA Slammiversary pay-per-view (PPV) on Sun., June 2, 2013, in Boston, Massachusetts, was made, as Bully Ray defends the heavyweight championship against the old guard once again when he takes on Sting, who defeated Matt Morgan to earn his shot.

Here's the official poster, which was just released by inDemand: 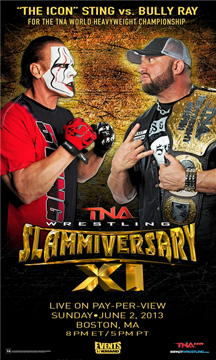 Nothing fancy, just showcasing the featured match-up that no one is clamoring to see. Make no mistake, Ray is doing some of the best work of his career as the heel leader of Aces and 8s who masterfully manipulated his way to a title shot and then defeated the company's top babyface to begin his first run with a major singles title but Sting is not a compelling opponent to challenge him.

Sure, Sting has had his issues with Aces and 8s but he's working past his expiration date. Ray can get heat but was never the strongest wrestler and the fear is the match will be overbooked because it can't get over on its own merits.

Still, that's the main event for the show, Cagesiders. Dig it?