After a long, grueling tournament to crown the greatest tag team of all time, the Road Warriors have once again proven themselves better than all the rest, defeating the Dudley Boyz in the final.

When the Greatest Tag Team Tournament was introduced, the obvious number one seed overall went to the Road Warriors, or the Legion of Doom (LOD) if you've always been a World Wrestling Federation/Entertainment mark. Hawk and Animal, with their face paint, spiked shoulder pads, and mass appeal, simply stood out as the best choice for that slot.

Early favorites, the Warriors didn't face a significant challenge until reaching the Final Four, blasting past such teams as Switchblade Conspiracy (90-8), Doom (52-3), the Rockers (68-11), and the Fabulous Freebirds (66-14). Even in the Final Four round, LOD was never truly threatened, taking a clean 59-42 victory over the Hart Foundation, another one seed.

That led them to the final, where the Dudley Boyz awaited.

The Dudleys strength of schedule matched up with any team in the tourney. After thrashing the Headbangers (61-4) and disposing of Los Guerreros (61-6), they ran into trouble against Harlem Heat (52-31) and were very nearly bounced by the British Bulldogs (43-41). Ultimately, they benefited from the Brainbusters upsetting Edge & Christian in their region, and made their way to the final with a 49-35 victory over Arn Anderson and Tully Blanchard.

It became clear quickly, however, that the Dudleys simply couldn't match up with the Warriors and the thought at the start of the tournament, that this was all just a drawn out process to crown the obvious number one team, rang true.

The Road Warriors are the Greatest Tag Team of All Time.

Up next will be the Greatest Finisher tournament. We'll hold a period of voting much like we did for the Greatest Match tournament so you Cagesiders decide the field, as well as its seeding. That process will happen throughout this weekend and the tournament will begin not long after.

Never any time to rest! 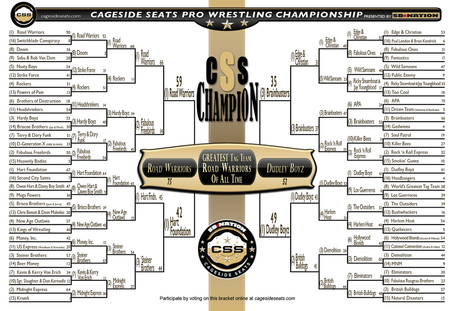