Editor's Note: This FanPost has been mildly edited for promotion to the front page and various sections within Cageside Seats for your enjoyment, Cagesiders!

"If I could do it over again, I would end the match exactly like we did, with Vince giving me the chair and me using it to beat the Rock. The only thing I'd change is after shaking Vince's hand, I would give him a stunner too and walk out."

--Steve Austin, reminiscing about the famed ending to WrestleMania X-Seven.

One year after regaining the spotlight at WrestleMania

A frustrated Austin marched down the long Toronto ramp to face Scott Hall in a mid-card sub-ten-minuteWrestleMania squash. Later that year, disgruntled by his place on the card relative to his starpower and appeal, he quit the company, only to return in time for one final hurrah and a career-ending match with The Rock atWrestleMania XIX.

How did Steve Austin flame out so quickly?

The man who was THE main-eventer of 1998 and 1999; THE reason why WrestleMania X-Seven was held in the Houston Astrodome, and not some basketball arena, ends up quitting -- but for a retirement run -- all in the space of only five years. To hear him tell it, he both agrees he needed to turn heel at WM17, and admits that doing so cost him a good two years at or around the top of the WWF/E food chain.

The fact is, turning heel is not what killed Austin's post-injury momentum (which led to the mid-card spot at WMX8, and his "creative has nothing for you" run of mid 2002). But, let's begin with some context:

The lead up to the WrestleMania X-Seven match

was probably the most intense in WrestleMania history. The two unquestioned kings of Pro Wrestling, Steve Austin and The Rock, met in front of the largest pay-per-view (PPV) crowd since WrestleMania III. Austin had just returned from a year-long hiatus, won the Rumble and was on a crash course to the 'Mania main event, the spotlight of spotlights that he had been forced to vacate a year earlier due to nagging neck problems.

He had left as the undisputed face of the company.

Upon returning, the spotlight he had once occupied solely, now was shared with Triple H in the prime of his career (and doing Hall of Fame level work as a heel), and The Rock, who, in Austin's absence had not just served as a fill-in but had more than adequately replaced him as the (baby)face of the company.

Austin felt his character had grown stale and that a change was needed. It was decided in the weeks leading up to'Mania that Austin should turn heel and return to the villain role he once occupied as an upper-mid carder, but had never tried since he became Wrestling's biggest superstar.

Unfortunately, a series of events occurred which hampered the heel turn from being a success. These circumstances, almost all out of his control, gave his career its first slump since he truly broke out at WrestleMania 13. It turned out to be a slump from which his career would not recover.

What were these circumstances?

For starters, the change from face to heel happened in Austin's back yard; the Houston crowd simply refused to turn on him, stunting the heel turn in its infancy.

Despite that, things looked promising early on, when he aligned himself with Triple H, who pre-injury, was the biggest heat-magnet in the industry. Austin held the WWF title, Triple H the I-C title, and together they were Tag Team champs, soaking in the boos as arguably the best heel tandem since Hall & Nash in WCW. 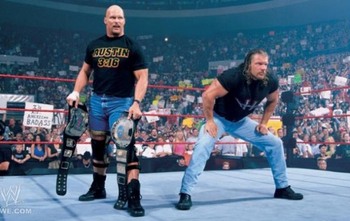 And then came the match. Probably one of the top five RAW matches of all time. The Two Man Power Trip put their tag titles on the line against the Chris' Jericho & Benoit.

Austin was back to playing the heel solo, but whether or not he could have found a groove as a heel champ, we'll never know.

A month after Triple H was injured, Booker T and Shane launched the WCW invasion, which became the summer angle of summer angles. Austin's heel character went into limbo. Unable to play the straight heel in the face of the WCW invaders (played almost exclusively as a heel group), Austin devolved into a sensitive, guitar playing, Vince-hugging stooge.

Personally, this writer thinks Austin was doing his best creative work since he won his first WWF title. But the fans at the time wanted the old Stone Cold back. Austin teased a face turn, but ended up siding with WCW in order to keep his heel heat.

Though he turned back to a babyface at the end of the year,

his character seemed to be doing a parody of his Stone Cold persona, circa 1999

Newer characters and nostalgia acts were coming back and capturing fans attention; Austin was getting lost in the crowd. The face of the company was starting to become just another performer. His match with Scott Hall only underscored that reality.

Yes, it's true that Austin's neck was on borrowed time

and regardless of his career between 2001-2003, WrestleMania XIX was still likely to have been his last show. But the heel turn -- which stumbled out of the gate, was thrown for a loop in the loss of Triple H and went into limbo due to the Invasion of WCW--robbed him of two more years where he belonged:

In the spotlight as the top dog in the company.

Before we get to John Cena

Let's consider what likely was the plan for Triple H and Stone Cold following WrestleMania X-Seven.

Since Vince likes to think out his WrestleMania main events a year or so in advance, it's likely that he was thinking about his main event for WMX8 before he bought WCW. Even if he hadn't, the original plan was always for WCW to be it's own brand, so his purchase of his rival company would have had little impact on his overall plan for the WWF.

I think the plan was for a Triple H vs Stone Cold main event, and I think it's pretty obvious how one would get to such a match too: Triple H teams with Austin on and off throughout 2001, and at some point late in the year Austin turns on him, Triple H wins the Rumble (the turn could even come AFTER the Rumble win, a la Triple H/Batista), and Triple H (now a face) gets his revenge and the title at WMX8.

With the InVasion winding down, and the reality that a separate WCW brand was not feasible (though it could have been if done right... but that's a whole different article), Vince changed the plans to a unification of both world titles.

Deciding that it was the perfect opportunity to "make" one of the guys who hadn't held the top belt yet, he made Jericho the first unified world champ. Triple H still got his main event babyface win, while Austin, fresh off a disappointing 2001, got the shaft.

John Cena is the most sure-handed company face

Vince has had since Austin

Despite a character change being needed, Vince is (in this writer's opinion) gun shy to go through with it, despite the fact that heel turns have been the tried and true way to revive a tired babyface. It worked for Andre, it worked for Hogan, it worked for the Rock, it worked just recently for CM Punk mid-title reign.

So, why won't Vince pull the trigger on Cena?

One could argue that it's because there's not a babyface on the roster who could replace Cena as the top good guy in the company. But that certainly didn't stop Vince in 2001, when Rock was about to shoot a movie and Triple H was staying a heel. The lack of a babyface replacement wasn't the reason Austin's heel turn struggled. Benoit, Jericho, and Angle all manged to rise to the occasion as babyface challengers (which is all you need when a heel is playing the dominate champ).

The fact is, the reasons Austin's turn failed are simply not present here to derail a Cena turn:

1. At least half the crowd is actively clamoring for a heel turn, unlike with Austin where the fans at first refused to accept it.

2. Cena's character is far more stale than Austin's was; a heel turn could give him so much more to work with. His turn could be as big as Hogan (who was arguably equally as stale when he turned).

3. There's no earth-shattering event on the horizon like the WCW purchase/invasion that could possibly derail the heel turn. Austin was forced, as the WWF champion to continue being a heel while the fans wanted to cheer him against the heel-WCW invaders. His character had to become "silly" in order to earn their boos. And though, again, I thought it was great work, it wasn't doing his credibility any good.

So why not pull the trigger at WrestleMania 29?

Cena has already indicated he's desperate to win, due to his "horrible" year that started with a loss to the Rock atWM28. Align him with Punk, form a new 2-man Power Trip, and play out the story that was originally to be played with Triple H and Austin.

Only this time, there'll be no InVasion derailing it, and (hopefully) no crippling injury.

CM Punk & John Cena vs Hell No at Extreme Rules for example. A singles match with Daniel Bryan. Feuds with Randy Orton, Sheamus, Ryback. The Rock at SummerSlam. A survivor series match alongside Punk. A tag match with Punk vs Rock -- and who else of course -- Brock Lesnar, at Elimination Chamber.

The point is, there's more than enough potential feuds to keep a heel Cena busy in 2013-14. If nothing else, it will give his character a shot in the arm.

is considered a failure, doesn't mean Cena's would be.

It's time to pull the trigger on it, and do WrestleMania 17 right this time.