Wrestling With The Past: The Bizarre Origins of the Battle Royal - Part Two

"No matter how cleverly a man might be holding his own, he was always in danger of having someone come at him from behind with a none-too-well padded fist. Scientific boxing was not in evidence. The contest was one of brutal physical endurance. When a man could keep it up no longer he left the ring and the winner was the man who stayed in longest -- As announced, the winner was to receive $4.00 the second place man $2.00 and the third $1.00."

Share All sharing options for: Wrestling With The Past: The Bizarre Origins of the Battle Royal - Part Two

This article is an exclusive Cageside Features Guest Column by: John S. Nash

"Professional wrestling... has no history, only a past."

- The Phantom of the Ring

"When the legend becomes fact, print the legend."

Author's Note: Some contemporary sources contain terms in reference to various ethnic groups, which some may find derogatory and/or offensive. While neither I, nor this site, condone the viewpoints expressed with their use, we also do not condone pretending such sentiments did not exist. For that reason, they have been left in. Hopefully, they will not detract from your reading experience.

For the earlier history of battle royals see "Wrestling with the Past: The Bizarre Origins of the Battle Royal - Part One." 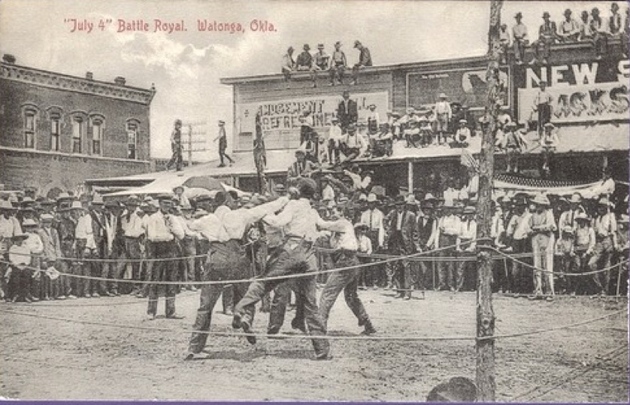 It was complete anarchy. Everybody fought everybody else. No group fought together for long. Two, three, four, fought one, and then turned to fight each other, were themselves attacked..."

As we saw in

"Wrestling with the Past: The Bizarre Origins of the Battle Royal - Part One", battle royals first appeared in England in the early 18th century, having been spawned directly from pugilism. They quickly became a popular attraction, but just as quickly, died out on the boxing stage -- only surviving as a competition practiced by slaves in the United States.

Fortunately, or perhaps unfortunately, battle royals would see a resurgence following the American Civil War and the post-war Reconstruction, starting in the Southern States but eventually spreading across the country.[EN5] But it was always below the Mason-Dixon line that they proved most popular.

of the Marquis of Queensbury rules, they were now fought wearing gloves, although other niceties, such as rounds and weight classes, were ignored. Sometimes the participants were also blindfolded, had one arm tied behind their back, or sometimes both. In almost all cases, the participants in the battle royals were black.[EN6]

"It was announced in the newspapers as an "Athletic Show" and it began with a "battle royal" boxing bout among five Negroes.

"Five burly men, stripped to the waist, entered a roped arena on a platform. At the stroke of the bell two couples immediately began sparring. The fifth man then pitched into one of the boxers who seemed to be having the best of it, thus breaking up the pair. The released man turned to the other group and picking out one of the men began without warning to punch him.

"And so the fight proceeded.

"No matter how cleverly a man might be holding his own, he was always in danger of having someone come at him from behind with a none-too-well padded fist. Scientific boxing was not in evidence. The contest was one of brutal physical endurance. When a man could keep it up no longer he left the ring and the winner was the man who stayed in longest.

taken part in battle royals while in bondage, they were usually held for the entertainment of their own community. Now, the primary audience was white, attending shows that made sure to announce that the combatants would be "five 'duskies'" or that "special seats will be reserved for white patrons."

It is not a coincidence that it gained popularity during a time known as the "nadir of American race relations," nor that they were most common in the former slave states where racial tensions were at their worst. The inherent message of these battle royals, according to Andrew Kay, author of The Pussycat of Prizefighting, was easy to discern.

Manufactured disunity amongst blacks was the barely concealed plot redolent of the old days on the plantation. 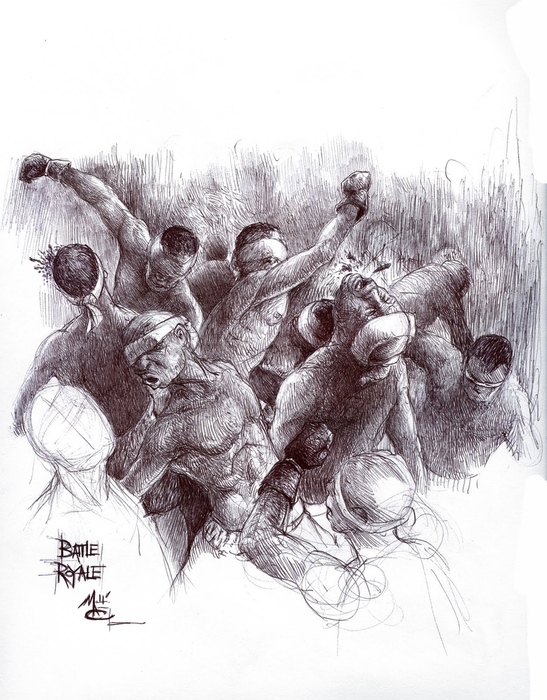 of this obvious symbolism that Ralph Ellison chose to open his novel, Invisible Man, with a "blind battle royal". The contest presented by him would serve as a metaphor for America's treatment of its black citizens, sadly with very little embellishment.

Ironically, as much as these battle royals were obvious racist theater, they also provided opportunities to many aspiring black fighters. Entry and victory in a battle royal could provide an opening into the world of professional boxing; a route taken by some of the most legendary of "colored" champions.

Joe Gans, the World's Lightweight Champion and first black champion in boxing, famously got his start in 1890, when, at the age of 16, he entered a Baltimore battle royal against "seven sons of Ham", for the chance at a $5 first prize.

Another lightweight champion, Beau Jack, also made his mark in battle royals, knocking out his own brother in one such contest. He was so impressive in a battle royal victory at the Augustus National Golf Club - the same place he had previously shined shoes - that golfer Bobby Jones helped bankroll his entry into the professional ranks. Heavyweight champion Jack Johnson had an even more impressive showing, according to George Silar:

"I went down to Springfield, Ill. about seven years ago to referee a series of glove contests, and the management, for a humorous opener, staged a battle royal in which six colored men, among them Johnson, took part. Jack was the last to enter the ring, and directly he did he landed one of his every-man-for-himself opponents a wallop on the jaw, dropping him as if shot.

"Two big blacks then sailed in after Johnson, who danced out of distance, and, before his opponents knew what had happened, they were on the floor, because they foolishly permitted their respective jaws to come in contact with Jack's right mitt. The other blacks thought of the old adage of: "He who fights and runs away will live to fight another day" and crawled out of the ring."

Another surprising battle royalist was singer James Brown, who describes in his 1997 autobiography, The Godfather of Soul, how thanks to his reputation he would be chosen by "the white men who came around to recruit scrappy black boys to be in the battle royals..." once at the auditorium, he recalled:

"...they blindfold you, tie one hand behind your back, put a boxing glove on your free hand, and shove you into a ring with five other kids in the same condition. You swing at anything that moves, and whoever is left standing at the end is the winner."

the battle royal would be an almost mandatory opening act for any boxing card, and plenty of wrestling cards as well. Eventually, their popularity would wane, first in the Northern States, starting with New York where the State Athletic Commission ruled to ban them in 1911.

In barring them; they referred to such affairs as "revolting spectacles" and declared that their action struck at a "real evil of the sport." Other, mostly Northern States, would soon follow, until battle royals, at least of the pugilist versions, were again only found in the southern states. There they would remain and last at least into the 60s, but eventually even these too would die out following the release of Ralph Ellison's Invisible Man, and the progress brought about by the civil rights movement. 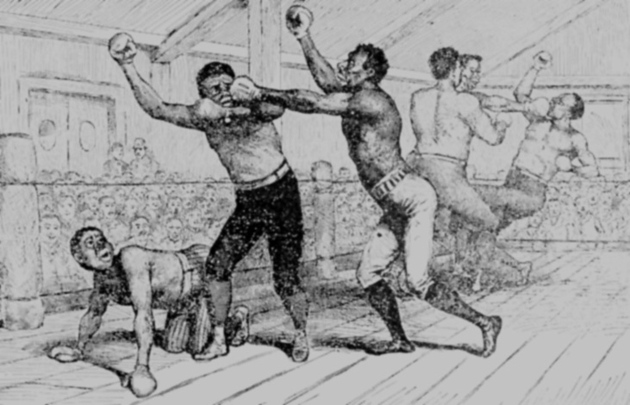 this did not spell the end of battle royals, only those of the boxing kind. Starting sometime in the 30s, promoters introduced the idea of a battle royal based not on pugilism, but on the antics of professional wrestling.

Two of the earliest promoters to hold such a battle royal were Johnny McGee, whose territory was based in Maine and the Northeast, and Herb Owen, who operated out of Oregon and the Northwest. The rules for Herb Owen's contests were as follows:

"...the six matmen and the referee entering the ring at the same time, battling until only two remained standing without shoulders pinned to the mat, and the finalists meeting in a 30-minute one-fall tilt for the attractive purse."

They were soon joined by a wrestling promotion that held events at the American Legion in Lake Worth, Florida. This group proved to be both the most famous and most influential promoters of these early wrestling battle royals.

of a battle royal held in Lake Worth, FL demonstrates just how similar they were to contemporary matches. But, these were not the only sort, as numerous types of battle royals, of the most ludicrous and ingenious sort, were unveiled in Fort Worth.

Examples of their inspired insanity include: 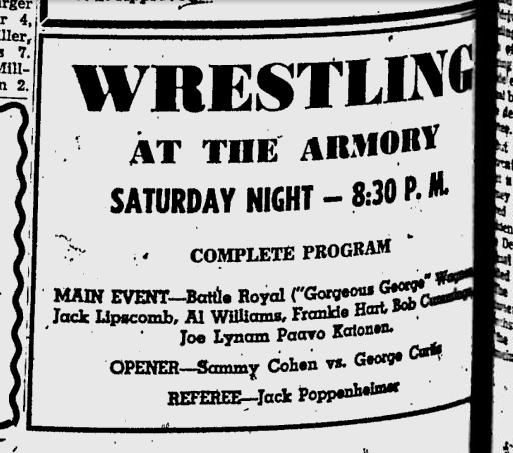 has since completely eclipsed that of the boxers'. And so, the popular image for the event is, thankfully, no longer a group of black boxers fighting in front of a white crowd, but instead, this: [EN7

EN5: "Battle Royals would also briefly make an appearance in the Tientsin area of China, where sailors of the British, American, Italian, and French Navies would organize boxing "smokers."

"One rollicking, distinctly Chinese feature of any boxing card In China, this matched 7 or 8 "huskie coolies from various companies" who mixed it up in a no-holds-barred free-for-all which included kickboxing. The solitary coolie left standing was awarded a purse that might amount to as much as 1,800 coppers for winning his performance."

EN6: There were the rare exceptions. Some battle royals, including a pair of the very few every filmed, one in 1934 and another involving blindfolded children from 1939, used only white contestants. The rarest battle royals were those that had both black and white boxers taking part.

EN7: This might also be the very first battle royal I have ever witnessed. My memories from when I was a 10-year-old are sketchy, but I vaguely remember this contest.

In addition to delving into wrestling's past exclusively for Cageside Seats, our CSS Features Guest Columnist, Mr. John S. Nashhas regularly chronicled the forgotten history of mixed martial arts exclusively for our fellow SBNation Blog: BloodyElbow.com, where original drafts of articles cross-posted on this site also appear. Cageside Seats is proud to present his entire archive of articles in this exclusive guest columnist section for your enjoyment. To read more fascinating articles from Mr. Nash, simplybookmark this link and remember to check back frequently for new content. Thank you for reading! - CSS Assistant General Managing Editor: June M. Williams

Wrestling With the Past