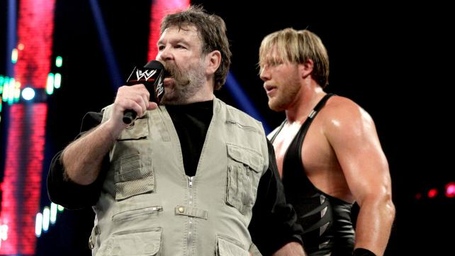 Not surprisingly, many eyebrows were raised during Monday Night Raw when Zeb Colter, Jack Swagger’s new mouthpiece, went on a tirade of wanting to take "his country back" and seeing "faces not like mine" in America. The xenophobia sent Twitter ablaze with many people claiming WWE went too far with this character. Due to the current political environment and landscape in America, some argue, a significant portion of the fans may actually share (and support) these jingoistic views. Thus, the heel shtick may not go over quite as planned. Obviously, having WWE fans cheer a tandem spouting not-so-veiled racist screeds may not be the best PR move for the company, especially in the PG and Be a Star Era.

I think this is a valid criticism and is worth discussing more fully. However, I urge fans to examine why this makes them feel uncomfortable at a deeper level. Even as someone that leans progressive on the political spectrum, I thought this Swagger/Colter dynamic was absolutely brilliant and a phenomenal way to get a guy like Swagger amazing levels of heat. As Paul Heyman correctly noted on a RAW not too long ago, people often say they want the Attitude Era or some edge back to the product, but, in reality, they like the neat and tidy storylines that don’t really push the envelope. I think the Coulter/Swagger reaction is another example that supports Heyman’s contention.

Perhaps more importantly, the fan criticism tends to discount how successful these kinds of dynamics have worked for the WWE in the past. For example, Sgt. Slaughter (the true American!) became an Iraqi sympathizer in the early 90s at the height (at the time) of our tensions with the regime in the Middle East. In addition, The Iron Sheik and Nikita Koloff got insane amounts of heat with their anti-American gimmicks. Considering the historical backdrop at the time (CIA led coup/1979 Iranian Revolution and Cold War tensions, respectively), these characters were able to get emotional investment from the audience. More recently, CM Punk, as the crazed televangelist wrestler in the Straight Edge Society, pushed the right buttons and got crowds to a boiling point. People wanted Rey Mysterio and Jeff Hardy to (shave) beat CM Punk so, so bad.

I think we are so used to boilerplate heel tactics (e.g., making fun of the hometown) that we forget great heel work can (and should) include more than that. Heels are supposed to make us feel uncomfortable and push the envelope. If the smarks are even getting a little nervous, then the WWE should feel pretty good about the Colter gimmick.

With guys like The Rock, Brock Lesnar, HHH (probably), and The Undertaker (probably) on tap for Wrestlemania, this is a good time for the WWE to take a risk or two. The WWE Creative team is probably one of the most thankless jobs on the planet, but they should definitely be commended for putting a provocative heel storyline into play. After all, it has worked in the past on several occasions. Think of a Swagger/Colter program build with a babyfaces like Del Rio and his BFF (with a Mexican bowtie!!), Ricardo Rodriguez. Get the popcorn ready. That would be awesome.