A.J. Lee has no idea the depths of adoration some of her fans are willing to go to... even writing fanfic featuring her in the lead role... - By Sgt. Jessica M. Kuhn [Public domain], via Wikimedia Commons

Editor's Note: This is a FanPost, this is FanFic written within a FanPost, furthermore the content within this FanFic piece is 100% permissible - as it meets and exceeds the guidelines at CSS. This piece was written for the entertainment of our community. If this is 'not for you', move along. That is all, carry on.

The show in Colorado Springs was over and it was time to once again hit the road. AJ emerged from the locker area in her street clothes.

“Are you hungry? A bunch of us are going out for dinner. There is an amazing place between here and Broomfield. It’s the best.”

How can I say no? “Yeah, sounds great. I am starving, actually.”

About 30 minutes later, we pulled into Cracker Barrel. “Cracker Barrel?”, I said, “Really? What, is IHOP too upscale for you?”

“Don’t knock The Barrel. It’s all about location and ridiculous knick-knacks”, she said.

“I know the real reason you like this place- they don’t make you order off the kid’s menu.”, I teased.

“Pretty much.", I confessed.

We walked in the door and were greeted by a large booth. Already seated, were Katilyn, Cody Rhodes, Damian Sandow and Jack Swagger.

I took my seat between AJ and Kaitlyn. We ordered, and when the waitress left, AJ gave me a funny look.

“Breakfast? At this time of night?”, she asked inquisitively.

“Yeah. What’s the problem? At least I didn’t order chicken tenders.", I quipped.

“They are chicken tenderloins, thank you very much.”, she replied.

“Ha. You like chicken loins. Keep it up and I wont share my bacon with you.”, I teased her.

“Please. You will give me a piece anyway. The last piece even.", she asked, batting her lashes.

“Why, because you are so pretty?", I inquired, smitten.

“Well yeah. Plus I have the car keys.”, she replied triumphantly. 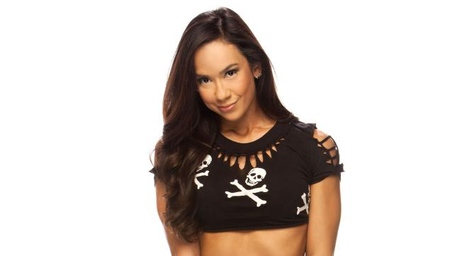 Kaitlyn interjected, “You will you two go get a room already? Yuck.”

“Yeah. This flirty stuff is making me sick.”, Cody added.

AJ chucked a dinner roll at him, as her reply.

Before a full scale bread and condiment war could break out, the waitress returned with our meals. It wasn't terrible, but then again, breakfast is hard to screw up.

And broke it in two!

“Here ya go. Sharing is caring.”, she said, as she handed me one half.

Yes. The woman of my dreams was right here in front of me.

It was getting late and we still had to drive to Broomfield.

“Time to hit the road.”, said AJ, as she got up from the booth (she had been on the end with me next to her).

She stood up and suddenly grabbed her stomach and doubled over in pain.

“Argh. Cramp. Owww! Give me my purse, I have Midol in there.”, she groaned.

I reached quickly and grabbed her purse off the table. She weakly reached out once, twice. Man, these were some devastating cramps.

Kaitlyn snapped a picture of me holding AJ’s purse. AJ stood up and took the purse back. She was grinning from ear to ear.

“You big faker. I can’t believe you did that!”, I exclaimed.

She took a bow. “I told you I would get you. And I have photo evidence.”

“Don’t worry, bro. You were totally working that purse!”, laughed Swagger, as he patted me on the back.

“You really are an evil genius, AJ.”, I said as we walked out the door together.

“Don’t feel bad, I always win. Its kind of my thing.”, she said, trying to ease the pain of her win over me.

“That’s it.” I moved my right hand in to hit 'The Button', then stopped and brought my left hand in. Direct hit. She jerked and started giggling. I kept my hand near her side, and did it again.

“Staaaahp it!”, she could barely talk between the giggling. 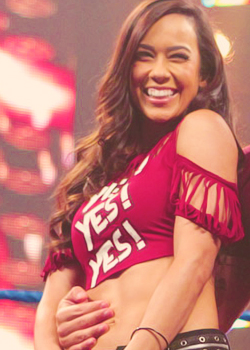 As we drove to Broomfield, with AJ’s ‘80s mix playing on the stereo, I decided to make a move. I took her right hand, which was resting on the center console, and held it in mine. She stopped singing along to “Walking on Sunshine” by Katrina and the Waves and looked at me. She smiled and stroked her hand with my hand as they were joined together. No words were needed for that moment.

I was checking my emails on my phone while AJ checked us into the hotel. She returned with a worried look on her face. “I'm so sorry. I made these reservations before I invited you. The room has one king sized bed. I hope that’s okay.”

“Yeah. We can figure something out.”, I said reassuringly.