Preview for the December 6, 2013 episode of WWE Smackdown: Setting the table(s, ladders and chairs)

Everything you need to get ready for tonight: Punk vs Shield, Tamina vs Natalya, Kingston vs Del Rio. And that last name gets us thinking about Alberto, and what should be done with him at this point. Read all that and more in this preview for 'Smackdown'.

Share All sharing options for: Preview for the December 6, 2013 episode of WWE Smackdown: Setting the table(s, ladders and chairs)

What you need to know

After a bit of Thanksgiving fun, live is returning to normal for WWE this week - except for Titus O'Neil, who had the worst reaction ever to his eating contest victory over The Great Khali last Friday. We're just a week out from TLC, and the tables, ladders and chairs are all being set for that show.

Damien Sandow's mini-program with Dolph Ziggler ended this past Monday with the Intellectual Savior's win in a match that also determined the #1 contender for Big E Langston's Intercontinental title. That match will take place in Houston on Sunday the 18th, as will Total Diva Natalya's latest shot at AJ Lee's Divas championship. That defense is the result of Natty's teams repeatedly defeating the champ's in multi-woman elimination matches.

No word yet on if Goldust and Cody Rhodes tag team belts - defended, sort of, just last week in disqualification win over Roman Reigns and Seth Rollins of The Shield - or Dean Ambrose's hardly-ever-on-the-line United States championship will make the card for the pay-per-view (PPV).

There will be handicap matches! Daniel Bryan apparently spent a week passed out in a parking lot after The Wyatt's assaulted him and dragged him there after the November 25th Raw. Brie must have been worried sick. Anyway, he'll face all three members of The Family. But there's no telling who has the upper hand heading in, since DB just defeated Erick Rowan, but Bray Wyatt delivered a message that still gives me nightmares.

CM Punk will also continue to be out-numbered, with a showdown with all three Hounds of Justice looming. The Best in the World also made it crystal clear that he believes HHH and company to be behind the recent ambushes by the trio, and looks to be on a collision course with The Authority.

Sin Cara is back, or at least the outfit is. He defeated Alberto Del Rio on Monday, while Xavier Woods actually seems to have a story going on with his debut, as his prompting of a heel turn for Brodus Clay means we may have an honest-to-goodness program in the mid-card.

All that - plus World Heavyweight Champion (WHC) John Cena and WWE champ Randy Orton seem to have some legitimate issues with on another. The Game assures us that their TLC match will result in one champ, so hopefully those boys can work out some other stuff while they're at it.

What to look out for

Tulsa hosted the blue show on Tuesday, so if you want to know what happen, spoilers are here. Previews are served up fresh, so no spoilage here.

The main attraction, announced Monday, is Punk versus a member of Shield. Which one? Other than spoiler readers, I guess. I find it funny that WWE.com is still asking folks to vote on the issue...I mean, hopefully they know by now, right? The results of that poll are also interesting... 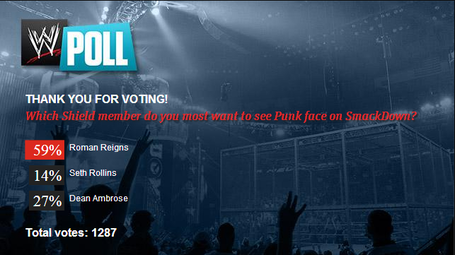 Based on this small sample, early returns indicate that that push is working.

The Viper is set to open tonight's broadcast on SyFy, and will undoubtedly be addressing the carnage that ensued immediately following his contract signing with Cena. In other main event news, the company is still hyping The Beard as a potential Wyatt Family recruit despite their little continuity hiccup. Expect that to be teased tonight as well.

Farther down the card, a couple of guys in need of a direction (and known for working stiff) will take out there frustration on each other when Alberto Del Rio collides with Kofi Kingston. And the Divas title feud will be built in the traditional way - with AJ's enforcer Tamina Snuka battling her boss' challenger, fellow legacy Natalya.

What they should do

Loyal readers know that I have a soft spot in my heart for ADR. He's got a global pedigree, and a track record as a shooter. He's capable of good-to-great matches, and can be quite dastardly or charming when given a little bit of leeway with his character and delivery. And the year planned for his ascension to the top of the company saw two historic events (Edge's retirement and Punk's pipebomb) fall right in his path.

His face turn was also sabotaged by the xenophobic rocket that got strapped to Jack Swagger earlier this year, too, but none of that changes the fact that he has failed to connect with audiences on a large scale throughout his WWE career and particularly as WHC this year.

So, with The Essence of Excellence removed from what may soon be a one-belt title scene, maybe it's time for a little vacation.

His reputation right now, at least among most hardcore fans, is as a decent worker who only gets pushed because of his marketing value in Mexico and to the Latino-American community. Despite some effort to keep him looking strong during his time as the Heavyweight king, not many will take him as a serious main event threat any time soon, and for him to suddenly start toiling in the mid-card or chasing a secondary belt would only make that worse.

Let Sin Cara (whoever's wearing the mask), Rey Mysterio or both put him on the shelf as part of building their planned WrestleMania match. Let him take a few months off to recharge and do some training down in Florida. As one of the most successful ever at adapting from lucha libre to WWE-style, his insights are invaluable to the next generation. Figure out an angle on the character other than "Mexican DiBiase", and let's see if he can get a different reaction with a summer time re-appearance.

What we're afraid they will do

Keep him as Latino Big Show...a solid hand who can be counted on to gamely shoulder public relations responsibilities. Someone who is enhancement talent that nobody takes seriously, until he's needed in the main event, at which point we'll be told to take him seriously.

Are you taking WWE seriously, or are you ready for a winter break?

Smackdown has been an entertaining self-contained wrestling show lately. Comment along tonight with your peeps here at CSS, and feel free to talk Alberto Del Rio or anything else related to the current WWE landscape in the comments below.