WWE 'NXT' results and reactions from Jan 30: Where the Tag Teams at?

WWE 'NXT' came as scheduled on Jan. 30, 2013; featuring the ongoing tag team tournament, Divas action and more! Here are the results and our reaction to the whole shebang!

Share All sharing options for: WWE 'NXT' results and reactions from Jan 30: Where the Tag Teams at?

There's something about your humble NXT recapper that I think you should know. WWE tapes mulitple episodes of NXT at a time at Full Sail University in Winter Park, FL. As a result, information about the content of shows is available months in advance. In the business, we call these "spoilers".

In preparing to watch the show each Wednesday night/Thursday morning on HuluPlus, I try to avoid reports about what has occurred at the tapings (also known as "remaining spoiler-free"; sorry for all the insider lingo). For the most part, what you get here are my honest impressions based on what the show contained - not rumor or innuendo from the wrestling media and the internet wrestling community (IWC).

Certain things are unavoidable (such as the news that El Generico will be joining the roster soon), and I don't mean this to say not to discuss spoilers you've heard or read in the comments. The comments are yours to do with as you see fit, within the boundaries of civility and good taste, of course.

I just thought you should know.

The episode of NXT at hand opened with a recap of last week's show, where the Heartbreak Kid, Shawn Michaels, announced the creation of the NXT Tag Team Championship and the tournament to determine the first titleholders. Tony Dawson's voiceover informs us that the two tournament matches on tonight's show will take us to the final four.

So that answers one of my big questions from last week - there were eight total teams in the tournament. The Wyatt Family (Luke Harper and Erick Rowan) and Oliver Grey & Adrian Neville's wins last week have them awaiting their opponents in the semi-finals. Their challengers will be determined right now!

The aftermath sees Corey Graves run in to slap his 13th Step finisher on the still recovering Riley. I guess Bateman was really selling the knees or he just doesn't like his partner any more than I do, since he's not around to make the save. Two refs pull Graves off of A-Ry, and the trouble that started when Miz's former lackey made circus jokes about the anarchist last week moves along.

Big E Langston and his NXT Championship are backstage with Dawson discussing the challenge issued by Conor O'Brian to close last week's show. This was a short, bland promo about putting The Ascending One to sleep permanently. It almost put me to sleep, I know that.

A head-scratching backstage vignette airs with Xavier Woods and Tony Dawson. The good news is El Local will be facing Woods next week! The bad news is we had to sit through this to find that out. Woods has just rescued a bunch of stuff from his parent's garage, so he and Tony sing along with his Discman and dance to Bell Biv Devoe. For reals. "Do Me" was my jam back in the day, but this was horrible. Xavier's beeper reminds him to say "when El Local hears the beep, he'll know he's in too deep" before he bums a quarter and goes to find a pay phone. I sincerely hope this was a one-off and not his character.

Paige defeats Aksana in approximately three and half minutes via submission

No sooner have I thought, "hey, that ring announcer looks like the Lingerie Football League player they signed who was in the pic AJ tweeted" (she's the one on the far right): 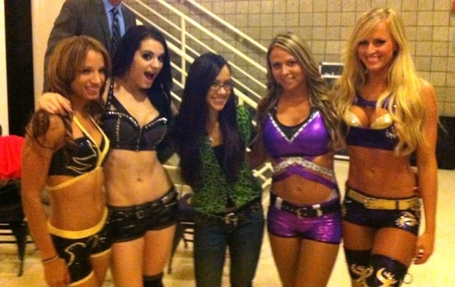 then Paige bumps into her while she is proclaiming her as the winner. A second later, Summer Rae attacks her from behind while the announce team acts shocked. See how easy it is to tell stories in the diva division?

Renee Young is backstage with Sasha Banks. Correction from last week, Banks is African-American, not Latina. I was thrown by her lighter complexion and some of the references Dawson was making; regardless, my bad on the assumption. Banks gives a good, exuberant promo about how big her win over Alicia Fox was last week. She's interupted by a stagehand who gives her a flowery poem from a secret admirer. Uh-oh, I think Sasha is about to be Manti Teo'd in Alicia Fox's catfish revenge scheme.

Two angles among the ladies? At the same time? Well, I'll be.

There's a well-produced highlight package from the Royal Rumble Fan-Fest that barely mentions the NXT battle royale, so I guess it will be airing on other shows as well. Quite a bit of hype for the "Shooting Straight" panels they held last Saturday...I wonder if those will ever make it to DVD? I'd be interested to see how honest they boys get. I don't think I'll ever get used to buzz cut HHH, though.

Another episode chock full of stuff wraps up with our first glimpse at the tag tournament bracket. Not sure of the schedule, but the match-ups are exciting: McGillicutty and Dallas will face the Wyatt Family in a bit of a hoss fight, as Kruger and Ohno collide with Grey and Neville in the other semi.

I come into NXT with high expectations, but I still have to call 'em like I see 'em. This week's show gets a B-. The theme of contests ending abruptly was a little bothersome, and the babyface team did nothing for me in the first tournament match of the night. And the Woods-Dawson segment was a real turd in the punch bowl.

How was it for you? I know there have to be some folks who want to defend Paige's good name. Let's talk it out in the comments, and keep Cageside Seats bookmarked for all of your NXT and WWE developmental news.