Many a wrestling fan has wondered about the real-world romantic life of Miss A.J. Lee. Who has she dated? Is she currently single? Find out all the information you want to know, even if you don't want to admit it, right here.

Share All sharing options for: Love Between the Ropes: AJ Lee Edition

Welcome to the latest edition of "Love Between the Ropes", the occasional column that fills you in on the love lives of your favorite professional wrestlers--because we both know you care, even if you don't want to admit it.

In our last installment, we learned about the romantic/possibly awkward Christmas of the Bellas and their respective beaus, John Cena and Daniel Bryan, and that Cody Rhodes is now off the market.

Today, we turn our attention to a particular member of the WWE roster who seems to be on the minds of quite a few Cagesiders: AJ Lee -- smart, funny, cute, and arguably the best actor on the roster. Oh, and by the way, she's also a solid worker with indie cred. Men want to be with her. Women want to be best friends with her.

So, of course, the only thing WWE creative could think to do with her was to line up a series of onscreen relationships between her character and Daniel Bryan, CM Punk, Kane, John Cena, and now Dolph Ziggler, successively. But you already know that. "Tell me what I really want to know," you're probably saying. "What is her type? Do I even stand a chance?"

As shocking as it may be for all of the AJ faithful to hear, she wasn't always as hot of a commodity as she is now, or maybe she was just not interested; as the Geek Goddess tweeted that she had her first kiss at 20, since she was focused on school and wrestling. Luckily for her, she found a way to simultaneously focus on wrestling and romance when she began dating her trainer, former TNA wrestler and current ROH star Jay Lethal, in 2007.

What was WWE's AJ Lee doing in the Impact Zone in 2008, you ask? No, she wasn't leading a disgruntled group of WWE Divas in a precursor to Aces & Eights (TNA creative can thank me for that idea later). She was supporting her man, that's what.

WWE's most over Diva since Miss Elizabeth appearing in the audience at a pay per view event may be the most exciting thing to ever happen in TNA history.

The trainer/student romance eventually evolved into an engagement, but ended in 2011. 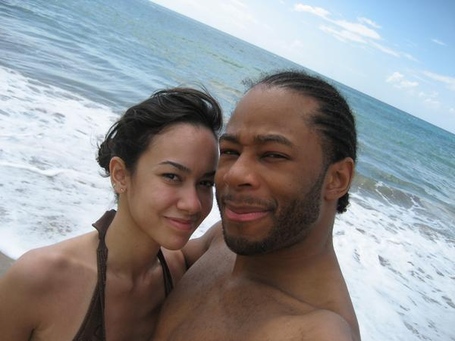 CAPTION: "AJ and Jay on vacation in happier times."

When she was eventually called up to the main roster, AJ went on the road with WWE full time. As likable as she is, she likely had her pick of men on the roster to date, right? A typical exposure-hungry Diva whose ambitions lie outside of wrestling (Stacy Keibler, I am looking in your direction) would choose the most popular, most powerful man in the locker room. So who did our girl end up with? 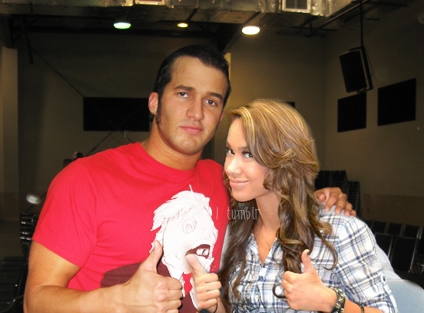 ...Wait, who is that guy again? He looks kind of familiar. Oh, yeah, it's [former] WWE Superstar Trent Baretta.

The professional wrestling version of Hillary Swank and Chad Lowe dated from 2011 to 2012. He even designed the signature green and white skull featured on her wrestling gear. Their relationship was rumored to have gone south when one of Trent's ring rats, er, admirers, directed derogatory tweets at his then-other half. Fortunately for her, and not-so-fortunately for him, these two are probably having a lot fewer awkward run-ins since his recent release from his WWE contract.

Is the princess of the IWC's collective heart dating anyone since she split from Barretta?

A few unfounded rumors suggest she's dating professional skateboarder Brent Frost, but a perusal of his Twitter account suggests that Brent's bro humor might not be a great match with a professional wrestling comic book geek: Example <<< Pure poetry, ladies and gents.

You know what that means? She might be available! It could still happen for you. If you do manage to win her heart, though, don't expect things to get hot and heavy too quickly. By her own account, AJ is "such a prude."

What do you think, Cagesiders? Do you love Miss Lee more than ever now? Are your hopes for bearing her children renewed?

Undoubtedly, some of you have information to contribute (particularly, AJ's probable future husband, Cagesider 'rancho king', without whose diligent research and encouragement this article would have been nowhere near as thorough); so please, spill your thoughts, feelings, and inside dirt in the comments!

UPDATE: AJ and Brent, via Twitter, have denied even knowing each other, let alone dating.

@ajleefanpage1 I've never even heard of that person.

Again, I don't know @wweajlee.Don't believe these crazy rumors.I am sure she is a cool person, but I don't know her.