This article is an exclusive Cageside Features Guest Column by: John S. Nash 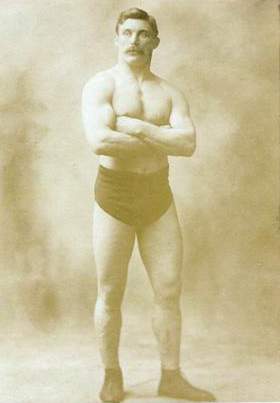 Col. John Corley, of the 3rd battalion, 26th Infantry division, was tired. They had rushed to Bütgenbach, Belgium to attempt to stop the massive German offensive that later became known as the Battle of the Bulge. For days, his battalion held their position, surrounded and outnumbered, while enemy artillery rained on them day and night. It was at this bleak moment that an officer under his command advised him to surrender:

"I was punchy for want of sleep", Corley said. "I went down into a dugout to think it over. I put my head down on a table and I must have dozed off. I was a cadet again in Tom's wrestling room. I could hear Tom saying to a cadet, 'Mr. Duerot what do you weigh?' Then to another cadet, 'Mr. Dumbjohn, what do you weigh?' Tom always ordered the two to wrestle, regardless of their weight... I got the idea that you did not have to be as big as the other fellow to win. I did not surrender the battalion. Gen. Bradley sent in tanks and rescued us." - Ottawa Citizen, June 26, 1957

What kind of wrestling coach was this Tom fellow, that memories of him could provide such inspiration? Not only inspiration such as exhibited by Col. John Corley, but also by such illustrious fellow West Point wrestling alumni as Gen. Omar Bradley, Gen. Dwight D. Eisenhower, and Gen. George S. Patton? The answer is a coach as tough as "Rough" Tom Jenkins, a former three-time American Heavyweight Wrestling Champion.

And no one else was as tough.

The toughness possessed by Tom Jenkins was not innate; it was not something he or anyone else could be born with. It was forged, like steel, by a lifetime of hardship. In Tom's case, hardships from even before his birth.

Tom's father, a Welshman named Thomas Jenkins, had lost his first wife and all his children in Holland to the Dutch Potato Famine of 1845, before returning to Britain where he met and married Tom's mother, Mary Williams, also of Wales. Life was not any more forgiving for the new family, as their first four children all died young. With their two surviving children, the family moved to America in search of the proverbial better life. They settled in Ohio, where two more sons were born, the youngest 140 years ago to this day, on August 3, 1872. They named him Thomas after his father.

It was at age eight that Tom was involved in a life changing accident, one that almost made him the 5th child of Thomas Jenkins to die at an early age, as detailed by John E. Rauer in "Rough Tom" Jenkins:

It was a rainy Fourth of July holiday in the summer of 1881, following Young Tom's second grade year that changed his life. Five independent youngsters found their cannon firing salute to Independence Day spoiled by rain-dampened black powder. Nevertheless, the creative cannon battery team came up with a great idea in the early morning hours of July 5th: build a fire under the cannon to dry out the wet powder. The predictable explosion blew the two-foot iron cannon apart injuring four boys. Tom got the worst of it with iron fragments and black powder specks embedded in his broken-jawed face, neck, and chest. Dr. Brooks worked to save Tom's eyesight by confining Young Tom to a quiet darkened room for close to a year. Tom's right eye was blind for life with limited sight in his left eye. Tom's formal education was over when Dr. Brooks told Tom the strain of reading with his weak left eye could blind him totally.

With school no longer an option, Tom drifted to the Cleveland streets becoming a self-described "Wild Kid". As a youth, he had been arrested eight times, mostly for stealing. What managed to keep him out of trouble was work: at age ten, he entered the workforce full time running water to thirsty railroad crews. By age twelve, he was making tire irons. Then at age sixteen, he was hired at the American Wire & Steel Mill, in Newburg, Ohio. His job was a "Rougher", a position that called for 2-man team to use heavy tongs to carry and feed 100 pound heated steel ingots through massive rollers to be pressed out into wire. The job was not only hard, but also dangerous, with Roughers having to not only be quick to keep pace, but also careful, so as to not get crushed in the rollers, or caught by a pressed red-hot ingot coil springing free. It was a job which could easily kill or maim an incautious man.

For years, Tom worked fourteen-hour days, six days a week, building up a strength and stamina that served him well, when, at the age of eighteen, he took part in an exhibition wrestling match at a company event. Filling in for one of the acts that failed to show, Tom wrestled and drew with a professional named Al Wood. Impressed by Tom's showing, the mill manager arranged for Jenkins to receive three lessons a week in catch-as-catch-can. For the next two years, Tom worked full time as a Rougher, while in his free time he wrestled as much as possible. In 1893, at age 20, Tom decided to quit his job and enter the world of professional wrestling full time. According to Jonathan Snowden in his bookShooter: the Toughest Men in Professional Wrestling, he was made for this new career:

Using his hard earned calluses to his advantage was just one of Jenkins's tricks. He was tenacious and aggressive to the point of being dirty, relying on power moves like bodylocks to soften opponents up and a stranglehold as his finishing technique. When that hold was banned in most contests, he moved to a jawlock, which to even the most careful observers looked an awful lot like a stranglehold.

Jenkins became an attraction right away. He must have been quite a sight - before each bout he would remove his glass eye, shocking those not in the know, and wrestle with his socket exposed to the world. It was a fitting image for a no nonsense athlete who came up the hard way in a hard world.

Tom went undefeated for the next few years, but two things eluded him: a match with Martin "Farmer" Burns, the American heavyweight catch-as-catch-can champion, and money. Unable to read, Tom was reportedly swindled again and again by his managers. Things changed in 1898 after Tom got married to Anne Lavinia Gray. His new bride helped him locate a competent manager in Harry Pollock, who in turn helped arrange for a match between Jenkins and "Farmer" Burns.

Unfortunately, the wily Burns saw fit to drop the belt to a member of his troupe, Dan McLeod, before meeting Jenkins, so even after winning in two straight falls the title eluded him. He would not get a chance at McLeod and the championship until 1901 and then only after facing and beating Frank Gotch, Farmer Burns top young prospect, in a private (and real) contest. A year later an injured Jenkins would drop the title back to McLeod in a rematch. McLeod's second run with the belt would be a short one, as Jenkins took it back on April 3, 1903.

Jenkins would remain champion until January 23, 1904 when "Farmer" Burns' protégé Frank Gotch finally managed to defeat Tom in an incredibly brutal - and very real - encounter. Jenkins would manage to recapture the title in an upset on March 15, 1905, at Madison Square Garden, but would lose it again, and for good, to Gotch only two months later.

The storied rivalry between Gotch and Jenkins was the greatest of their era, with the two meeting a total of nine times (including the earlier private contest.) Gotch would edge out Jenkins five wins to four, in some of the most vicious contests ever seen in the ring. In the end though it was the younger man that would prevail and be hailed as the greatest catch-as-catch-can wrestler in history, although it is worth noting that of Gotch's only six career losses, half came from Jenkins.

Lacking the wrestling trust possessed by Burns and Gotch, Jenkins not only had to fight harder to get to the top - and in probably more legitimate contests than any other heavyweight champion does before or after him - but also failed to profit as his mat foes had. Following his second loss to Gotch on February 2, 1905 told the Daily Northwestern:

"I am thinking of retiring," he said. "The fact is the public has been swindled so often by fixed wrestling bouts where formerly there were dollars in the game, there are only pennies now. A wrestler has to work hard all the time, much harder than pugilists do, and his compensation is much smaller. I am convinced that this is unfair, and I am going to quit the game."

It was money that probably led Jenkins to twice face - and lose - to the European and World Champion George Hackenschmidt. First, in London in 1904 in a Greco-Roman wrestling match, and then a year later in Madison Square Garden under catch-as-catch-can rules. Tiring of the wrestling game, Jenkins semi-retired in 1906 (he would fully retire from professional wrestling in 1914) to start a new career.

In 1905, President Roosevelt himself offered Jenkins the position of boxing and wrestling instructor at the United States Military Academy at West Point. Illiterate and with no more than a second grade education, Tom Jenkins now officially held the title of professor. Jenkins quickly set about to change this, and, with the aid of his wife, learned to read and write.

For the next 37 years Tom served as an instructor at the Academy (he also tried some professional football, playing for Buffalo while in his fifties), where he was greatly respected by the cadets, who called him "Papa" Jenkins. At one point, his former foe, George Hackenschmidt, visited him:

"Tom showed me around the training quarters and I saw his cadets at work. It was a stimulating thing to see the pride of the old-time champion in his work and in his team. The high esteem he held was evident at a glance and there must have been many of those during the war that so soon came (World War II) who look back in gratitude to the strength and endurance Tom's training had imparted to them."

Jenkins retired from West Point in 1942, and settled with his wife in Cornwall-On-Hudson, New York, where they celebrated their 52nd wedding anniversary in 1950, before she passed away. Tom Jenkins followed her to the other side on June 19, 1957, at the age of eighty-four. He laid to rest with full military honors at the United States Military Academy in West Point.

Frank Gotch himself best summed up the career of Tom Jenkins in a comment recorded by Joseph B. Bowle for the 1913 book Frank Gotch, World's Champion Wrestler:

"Jenkins was the strongest and roughest wrestler of his time. His star was setting at a time mine was in the ascendant. I had six* hard matches with Jenkins and every one of them were a bitter struggle. This old warhorse of the mat was mighty tough to handle. Anyone who struggled with his well-trained 215 pounds of bone, sinew and muscle knew he had been in a real wrestling match."

* Gotch and Jenkins had actually competed nine times together, in eight (8) official matches and one (1) private contest. 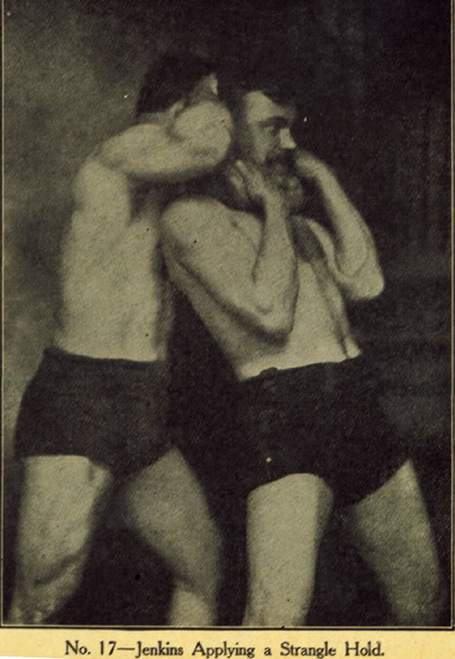 This article presented by our guest columnist John S. Nash. In addition to delving into wrestling's past for Cageside Seats, John Nash has regularly chronicled the forgotten history of mixed martial arts at our fellow SBNation Blog:BloodyElbow.com. Cageside Seats is proud to present a cross-posting of his article archives in this exclusive guest column and story-stream for your enjoyment. To read more fascinating articles from Mr. Nash, simply bookmark this link and remember to check back frequently for new content.