There are many reasons for this, the most obvious of which is the fact that most of today's fans are too young to have been around for it. You've heard all the stories, though, I'm sure. Japan is held in high regard for the manner in which they've treated pro wrestling over the years. You hear it even today, like with Matt Bloom. He became well known as Albert here in the states before going off to Japan and coming back as Lord Tensai, who WWE described as a guy who left to hone his craft overseas.

The Hogan of that era is recognizable only for his trademark blond locks and large, tanned frame. His wrestling style was far more technical than the kick-punch-leg drop-pose-down combination fans would learn to love when Hulkamania was running wild in the WWF. He also used a different finisher, a running forearm called the "Axe Bomber."

And on this date in pro wrestling history (June 2, 1983), he used it to defeat Japanese legend Antonio Inoki to win the first ever International Wrestling Grand Prix.

The Grand Prix was a round robin tournament with 10 participants (Antonio Inoki, Killer Khan, Hulk Hogan, Big John Studd, Andre The Giant, Rusher Kimura, El Canek, Enrique Vera, Otto Wanz, and Akira Maeda) from all around the world. Here's a handy-dandy guide to the tournament results: 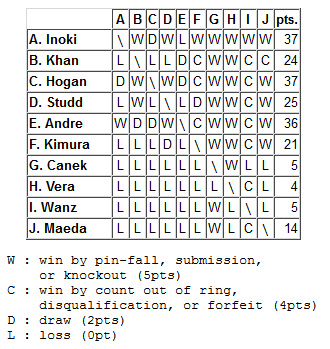 As you can see, Hogan and Inoki tied with 37 points, just one more than Andre the Giant, and the two met in the final to determine a winner. The match is considered the peak of Hogan's run in Japan, and it's difficult to argue with that. The two went back and forth for over 20 minutes until Hogan hit the Axe Bomber on Inoki while he was on the apron knocking him down to the outside, where he was supposedly knocked out. There was a great deal of debate for years over whether or not he was actually out but either way, he put Hogan over.

Watch the match, in its entirety, after the jump.